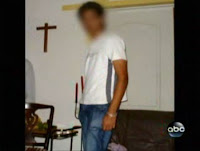 I find it unbelievable that the Netherlands will not grant asylum to Mehdi Kazemi, age 19, who fears he will be executed if forced to return to Iran. The same goes for the United Kingdom. Based on all the well founded reports of gays being executed in Iran, even those under age and in violation of international treaties. One can only wonder what the Hell is enough to show that asylum is need. As ABC News is reporting (http://abcnews.go.com/GMA/story?id=4413302&page=1), Kazemi’s boyfriend has already been executed by hanging. The denial by the Netherlands and the mealy mouthed talk by the British Home Office are shocking. Here are some story highlights:

While studying English and science in the U.K., Kazemi learned that his boyfriend had been executed for sodomy back in Iran. His father told him the boyfriend had confessed to Iranian authorities that Kazemi was his lover. The authorities, Kazemi found out, had already been to his parents' house with a warrant for his arrest. "I was very scared," Kazemi wrote in a letter accompanying his request for asylum in Britain and published in full on the website of the Canada-based Iranian Queer Organization. "I wish to inform secretary of state that I did not come to the UK to claim asylum … But in the past few months my situation back home has changed. The Iranian authorities have found out that I am a homosexual and they are looking for me."
A British judge denied Kazemi's request for asylum in 2006 on the grounds that Iran does not systematically persecute homosexuals. But Kazemi, terrified at the prospect of being handed over to Iranian authorities after his application for asylum was denied, fled the country. After a journey that sent him through the Czech Republic and Germany, he is now in The Netherlands, where he is being held in detention while a Dutch court decides whether the country is obliged to hand him back over to Britain under a treaty that says refugees can only request asylum in one European Union country.
Pegah Emambakhsh, a 40-year-old lesbian woman who fled Iran for Britain in 2005 also faces deportation to Iran after being denied asylum. Emambakhsh's partner is currently awaiting execution by stoning in Iran.
Homosexuality is a capital crime in the Islamic Republic of Iran. According to one estimate by gay rights activists, more than 4,000 homosexual men and women have been executed in Iran since the Islamic Revolution in 1979. Both Kazemi's and Emambakhsh's cases have caused a public and political uproar in Britain. According to the Independent, more than 60 British Members of the European Parliament have signed a petition asking Prime Minister Gordon Brown to overturn the judge's decision in Kazemi's appeal for amnesty.
Posted by Michael-in-Norfolk at Tuesday, March 11, 2008

Wow. I'll grant him asylum right here in my house. I've done it for others, I'll do it for him. Unfortunately I haven't the political clout to affect much. This is so sad and scary.