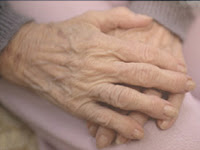 I have posted several times on the health insurance and health care crisis in the USA faced by millions of Americans. This story highlights how it CAN happen to you, even though you have a good job and are anything but a deadbeat. When one of my daughters had a serious illness less than 10 years ago, I experienced first hand what a medical crisis could do to one's savings and finances. Here are portions of this MSNBC story (http://www.msnbc.msn.com/id/20201807/):

In our second Gut Check America vote, readers rated health care as the issue of most concern for them. After a false start in Oregon, we found reader Kathleen Aldrich, a Lompoc, Calif., resident who wrote to us about how her battle with cancer drove her to bankruptcy, even though she had health insurance. Here is her story:

LOMPOC, Calif. - Kathleen Aldrich, financially ruined by two bouts with ovarian cancer, is not who you might assume she is. She raised three kids as a single mom. She worked hard for years. She had good jobs. She paid her bills. She lived in a nice house and drove a nice car. She had a decent credit rating. She had health insurance.

Now she has a record of bankruptcy and is the embodiment of the fear that nags at millions of U.S. families: that they are but one medical calamity away from losing everything. Like Aldrich, they — and perhaps you — could be.

“I didn’t do anything wrong,” Aldrich says thoughtfully, sitting in the neat, pale green living room of her tiny stucco duplex in the middle of this mostly middle-class American town. “I don’t see that I did.”

Just turned 50, tall and blond with a quick smile, Aldrich is gratefully in remission for a second time from the ovarian cancer, the No. 5 cancer killer of women. Despite “feeling like a little black cloud follows me around all the time,” she has a lot to live for, from a budding long-distance romance to a precocious 6-year-old granddaughter named Alyssa.
The bankruptcy has quashed all thoughts that she might someday retire. More immediately, it has left her unable to obtain thousands of dollars of work on her teeth, which likely were weakened by the powerful anti-cancer drugs. And it has left deeper wounds of shame and guilt over having to walk away from unpaid bills after a lifetime of responsible living.
Aldrich’s situation is "asinine" but increasingly common, said Dr. Deborah Thorne of Ohio University. Thorne, co-author of a widely quoted 2005 study that found medical bills contributed to nearly half of the 1.5 million personal bankruptcies filed in the U.S. each year, said that ratio has likely worsened since the data was gathered. Bankruptcy in the light of large medical bills is “unfortunately the only choice many people have," she said. "They will never in their lifetimes pay them off. Like Aldrich, Thorne said, three-quarters of the individuals in the study who declared bankruptcy because of health problems were insured.

It’s hard for Aldrich to talk about her situation without strong emotions, and some tears, surfacing. But she does not want to be seen as a pity case. She sees herself as a cautionary tale for average Americans: “It can happen to you.”

As more and more Americans in Chimperator Bush's Amerika find their access to quality medical care reduced by an inability to afford health insurance and/or pay co-pays and stop loss amounts, it is no surprise that while Americans are living longer than ever, they are not living as long as people in 41 other countries as reported by CNN (http://www.cnn.com/2007/HEALTH/08/13/life.expectancy.ap/):

For decades, the United States has been slipping in international rankings of life expectancy, as other countries improve health care, nutrition and lifestyles. Countries that surpass the U.S. include Japan and most of Europe, as well as Jordan and the Cayman Islands.

"Something's wrong here when one of the richest countries in the world, the one that spends the most on health care, is not able to keep up with other countries," said Dr. Christopher Murray, head of the Institute for Health Metrics and Evaluation at the University of Washington.
A baby born in the United States in 2004 will live an average of 77.9 years. That life expectancy ranks 42nd, down from 11th two decades earlier, according to international numbers provided by the Census Bureau and domestic numbers from the National Center for Health Statistics.
Researchers said several factors have contributed to the United States falling behind other industrialized nations. A major one is that 45 million Americans lack health insurance, while Canada and many European countries have universal health care, they say.
Posted by Michael-in-Norfolk at Wednesday, August 15, 2007