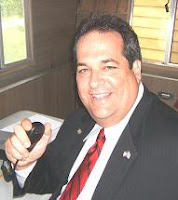 Rep. Bob Allen insists he's innocent of solicitation and says an undercover officer in the park did the asking. Actually, I am glad he refuses to resign - the longer he hangs on the more news coverage on his trolling for gay sex and the more focus on the hypocrisy of these GOP closet cases. Here are portion of the Orlando Sentinel story (http://www.orlandosentinel.com/news/politics/orl-boballen0907aug09,0,1413209.story):
TITUSVILLE - Embattled state Rep. Bob Allen, who has been vilified by computer bloggers and lampooned on late-night talk shows since his arrest on a charge of soliciting prostitution, is not a criminal or a racist and has no plans to resign, his attorney said Wednesday."Based on the police officer's own report, this case should be dismissed," said attorney Greg Eisenmenger, adding that he would file a motion for dismissal. "The officer did all the soliciting."Allen's arrest July 11 outside a bathroom in a public park made headlines, but the release days later of his taped statement to police and other documents created a furor. Florida House Speaker Marco Rubio said in a statement Wednesday that Allen's remarks were "disturbing."
Allen, R-Merritt Island, told investigators he was just playing along when the undercover Titusville officer suggested oral sex and $20 because he was intimidated by the "stocky black guy," according to the statement.Allen, who is white, also said that there "was nothing but other black guys around in the park" and that he thought he was about to be robbed. At the time, Allen was unaware the other men also were undercover officers.
Allen and the undercover officer left the bathroom after the legislator suggested they find a quiet place. On the way out, Allen asked whether the officer was a cop, and he replied, "Nah, if I was a cop, why would I be hanging around here?" the report states.The two were walking to Allen's car, which had been left in a no-parking zone, when the officer showed his badge and arrested the lawmaker. Allen is set to be arraigned Aug. 23 in Titusville.
This guy is a complete idiot.
Posted by Michael-in-Norfolk at Monday, August 13, 2007

The guy is a complete idiot who should have kept his mouth shut from the onset.

Living in Florida and following this case rather closely, let me assure you that playing the "fear of big black guys" card is not helping his case at all, making him look not only like an idiot, but a racist one at that(although it appears he was willing to purchase and take a bite out of that chocolate)!

The focus now is on the video showing Allen going in and out of the men's room three times in a row.....

Just the facts.... the guy was looking for some action, thought he found it, and got busted instead!

He's a politician, republican, christian, married with a daughter in high school.... this guy will never admit guilt!