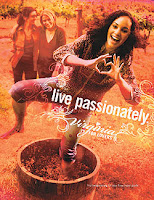 Jim at Though Lovers be Lost has had some fun lately spotlighting the idiocy of some government bureaucrat types in making up slogans or other promotional items only to find out their idea has very negative connotations they never thought of (my favorite is the green license plates in Ontario for environmentally friendly vehicles which unfortunately used the color scheme matching that of some states in the USA to denote vehicles of registered sexual predators). Now, Virginia has joined the parade of bureaucratic idiots with its new tourism slogan and symbol. After using the "Virginia is for Lovers" slogan for years - even though in Virginia Lovers can only be straights - the state came up with a new slogan, "Live Passionately" combined with a hand signal depicting a heart. Sounds OK at first. However, turns out that the hand signal has long been used by hardcore gangs. Oops!! Here are highlights from a Virginian Pilot story ( http://content.hamptonroads.com/story.cfm?story=130571&ran=85147):

The state’s new tourism slogan, “Live passionately,” almost died Friday. The catch phrase, featured on promotional material, was accompanied by a hand gesture that has been associated with a decades-old gang that has members scattered across the United States. Virginia Tourism Corp. officials decided to alter the images used in the ad campaign rather than scrap the idea.
The gesture, a heart made from both thumbs and index fingers, is one of many associated with the Gangster Disciples, according to several Web sites and the Virginia Gang Investigators Association. The FBI Web site classifies the Gangster Disciples as “one of the most violent of four African-American gangs that hang out on the south side of Chicago.”
“Out of respect to those who have concerns about the use of this symbol, we will adjust the creative images in our ad campaign to eliminate any further misinterpretation of the heart/hand symbol,” said Alisa Bailey, president of the state’s tourism marketer, in an e-mail. “We regret if anyone interpreted the symbol as anything other than a symbol of love, as was intended.” About $400,000 was spent on developing the campaign, not including ad buys, Bailey said earlier this week. By Friday afternoon, the pictures in question had been replaced with generic images or portraits of the same models – minus the hand gesture. No additional money was spent to make the change, Bailey said in a separate statement.
Tourism officials were made aware of the possible conflict earlier this week, before the T-shirts and bumper stickers were handed out in Virginia Beach on Wednesday. At the time, officials thought the gang was “a small group confined to South Carolina” and went ahead with the promotional event, Bailey said Friday.
Posted by Michael-in-Norfolk at Saturday, August 18, 2007

Email ThisBlogThis!Share to TwitterShare to FacebookShare to Pinterest
Labels: Gangster Disciples, tourism, Virginia is for Lovers