Another Vick co-defendant may turn witness against him 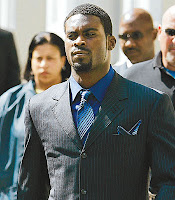 Things are definitely not looking good for local Surry County resident Michael Vick who has been charged with creating a dogfighting operation called "Bad Newz Kennels" in 2001, gambling on fights and setting up matches with owners from several other states. The men executed dogs that lost or performed poorly, and ran their operation out of a rural Surry County property that Vick owned, the federal indictment alleged. The Virginian Pilot is reporting this evening as follows:
Another co-defendant in the Michael Vick dogfighting case has scheduled a plea agreement hearing, an indication that he is ready to plead guilty and testify against Vick. Quanis L. Phillips has a hearing set for 9 a.m. Friday in U.S. District Court in Richmond, before District Judge Henry E. Hudson.
Tony Taylor accepted a deal and entered a guilty plea two weeks ago to the felony charge. The agreement required him to testify honestly against the remaining defendants: Vick, Phillips and Purnell Peace.
Posted by Michael-in-Norfolk at Monday, August 13, 2007

With the exception of Karl Rove's resignation, this is the best news I've heard today.....

Michael Vick is guilty as sin... the world knows it, Michael Vick, his family, friends and the Falcons know it.

The problem, as usual is the power of money. OJ got away with it, sadly, I'm terrified that Vick might also.

Time will tell...... Personally, I hope they hang the bastard!