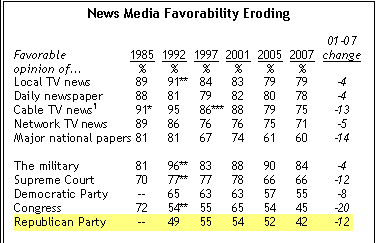 After six years of George Bush, right-wing control of Congress, neoconservative dominance, endless liberty-infringement and lawbreaking at home, and the Iraq War, what is the most disliked institution in America? According to the new Pew Poll (see chart above). Notably, there is an erosion in the favorability of virtually every political and media institution in the United States, but the Republican Party is at the very bottom -- lower than the press, the judges, the liberals, the Congress and all of its other Evil bogeymen. Yet the Democrats continue to give them whatever they want, dreadfully fearful of their great power and popularity. The Dems need to get a backbone and stand up to these bullies.
Posted by Michael-in-Norfolk at Tuesday, August 14, 2007

Of course the Democrats give the Republicans whatever they want: They're virtually the same party.

You did take note that Congress, controlled by Democrats, scored statistically-even with the Republican Party, no? And only 10% better, while "even" two years ago.

We're no longer a democratic republic, except in name; we are an plutocratic oligarchy with "puppets" appearing as the facade.