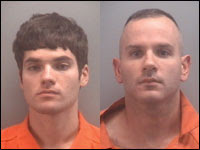 This whole story is so bizarre inasmuch as the two individuals charged for murder (pictured at left) lived in nearby Virginia Beach, operated a local escort service (with which I have no personal experience), and one of them (pictured at far left) was a go-go dancer at some of the local gay bars (again, not the ones I frequent some weekends). Here are highlights from 365gay.com's coverage:
(Philadelphia, Pennsylvania) Two Virginia men who operated a gay porn business and are accused of killing a competitor have surrendered their assets to avoid separate charges of racketeering. Harlow Cuadra, 25, and Joseph Kerekes, 33, are accused of killing gay adult filmmaker Bryan Charles Kocis last January in rural Pennsylvania. When the pair became suspects Virginia Beach police became involved in the investigation and started looking into their business.
The racketeering charges were filed after the murder charges. Court documents show that among the assets seized were thousands of dollars worth of jewelry, plasma TVs, computers and various other home entertainment systems. There also was a Honda Civic, Dodge Viper, Chevrolet Corvette and BMW. In addition the men forfeited $26,000 that was in their business account. The assets are now the property of the State of Virginia. The only thing not taken was their half-million dollar home. Authorities said it was heavily mortgaged.

Cuadra and Kerekes were extradited to Pennsylvania to face the murder charge. (story) The agreement with Virginia prosecutors while the men were behind bars in Pennsylvania. It means they will not be prosecuted on charges of racketeering, conspiracy to launder money and conspiracy to receive money from the earnings of prostitution.

I continue to find the situation ironic, since Virginia Beach is for the most part a bastion of the GOP in Virginia and is clearly part of Red America, unlike Norfolk, which was part of the Blue Archipelago in the 2004 election. I suspect the escort business got a lot of business from men in some of Virginia Beach's finest neighborhoods. :)
Posted by Michael-in-Norfolk at Wednesday, August 15, 2007