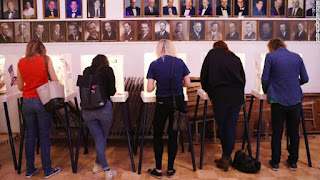 Republicans have a problem: their base is shrinking - literally dying off - and while they claim to be the party of working class Americans, the actual policies they push give little benefit to working class Americans.  All they have to offer in reality is pandering to white grievance and bigotry as well as right wing Christian extremism.  As a column in the Washington Post sums it up this way:

One of the poisonous legacies of Donald Trump’s presidency has been to expand the boundaries of expressible prejudice. Through the explicit practice of White-identity politics, Trump has obviated the need for code words and dog whistles. Thus his strongest supporters during the Jan. 6 riot felt free to carry Confederate battle flags and wear “Camp Auschwitz” sweatshirts without fear of reproof from their political allies. Many in the crowd surely didn’t consider themselves racists, but they were perfectly willing to make common cause with racists. In social effect, it is a distinction without a difference.

The party has been swiftly repositioned as an instrument of white grievance. It refuses to condemn racists within its congressional ranks. Its main national legislative agenda seems to be the suppression of minority voting. Trumpism is defined by the belief that real Americans are beset by internal threats from migrants, Muslims, multiculturalists, Black Lives Matter activists, antifa militants and various thugs, gangbangers and whiners. . . . The whole Trump movement, and now most of the Republican Party, is premised on the social sanctification of pre-cognitive fears and disgust.

Yet the largest single group within the new GOP coalition is comprised of people who claim to be evangelical Christians. And the view of human beings implied by Trumpism is a direct negation of Christian teaching (as well as many other systems of belief).

Yet this agenda is failing to be a winning strategy with more and more Americans even in red states where urban areas are growing and trending Democrat.  The GOP response has been to seek to disenfranchise as many minority and younger voters as possible in states where Republicans control the state legislatures through "voter ID" laws, restrictions on voting opportunities and blatant gerrymandering. To counter these anti-democratic efforts the House of Representatives has passed sweeping legislation that would thwart the GOP effort to disenfranchise Americans.  A piece in the New York Times looks at the bill and the GOP effort to kill it in the Senate that we will soon witness.  Here are highlights:

House Democrats pushed through a sweeping expansion of federal voting rights on Wednesday over unified Republican opposition, opening a new front in a raging national debate about elections aimed at countering G.O.P. attempts to clamp down on ballot access.

The vote was the latest bid by Democrats to beat back Republican efforts in statehouses across the country to enact new barriers to voting that would consolidate power for the Republican Party amid false claims of rampant election fraud . . . .

But the measure, which is supported by President Biden, appears to be doomed for now in the Senate, where Republican opposition would make it all but impossible to draw the 60 votes needed to advance. Democratic leaders have vowed to put it up for a vote anyway, and progressives were already plotting to use Republican obstruction of the bill to build their case for jettisoning the legislative filibuster in the months ahead.

“Everything is at stake. We must win this race, this fight,” Speaker Nancy Pelosi, Democrat of California, said as Democrats rallied on the Capitol steps before the vote. “At the same time as we are gathering here to honor our democracy, across the country over 200 bills are being put together, provisions are being put forward to suppress the vote.”

While Congress has worked for decades to expand access to the ballot, often with bipartisan support, the issue has become a sharply partisan one in recent years, as shifting demographics and political coalitions have led Republicans to conclude that they benefit from lower voter participation rates, particularly around cities.

“You can win on the basis of your ideas and the programs you put forward, which is what we choose to do,” said Representative John Sarbanes, Democrat of Maryland and a leading author of the bill. “Or you can try to win by suppressing the vote, drawing unfair districts across the country and using big money to spread disinformation.”

While they [Republicans] did not outright argue for making it harder to vote, they said that states — not the federal government — were best positioned to determine how to conduct their elections with integrity, and that the bill would lead to rampant fraud benefiting liberal candidates.

Study after study, including by Mr. Trump’s own Justice Department, has concluded no widespread fraud exists.

States under conservative control have succeeded in recent years in imposing new strictures that studies suggest disproportionately affect Black voters and those living in urban areas. Proponents argue that the steps are necessary to combat potential election fraud. But the effort has been turbocharged in some places since Mr. Trump’s loss in November, with states racing to strengthen voter ID laws, to make it harder to vote by mail or vote early, and to limit the role outside groups can play in helping Americans vote.

All told, state lawmakers have introduced more than 250 bills in 43 states that would tighten voting rules, according to the Brennan Center for Justice at New York University. The most prominent may be Georgia, where Republican leaders reeling from Democrats’ unexpected statewide victories have unabashedly sought to clamp down on ballot access by advancing sharp limits to voting by mail and early voting on Sundays, when many Black voters cast ballots after church services.

If the bill were to become law, states would be required to automatically register eligible voters, hold at least 15 consecutive days of early voting for federal elections and provide drop boxes for absentee ballots like the ones Mr. Trump falsely claimed led to fraud. It would make it far easier to vote by mail and far harder to purge voters from the rolls.

The legislation also targets partisan gerrymandering of House seats, requiring states to use independent commissions to draw districts based on apolitical metrics rather than ones that would maximize the influence of one party over another. Both parties gerrymander, but the practice has benefited Republicans more over the past decade. With new districts set to be drawn this fall, Republicans are expected to make even greater gains.

The challenge for Democrats is moving any of the bills through a 50-50 Senate, where 10 Republicans would have to vote yes. Under Mr. Trump’s leadership, the Republican Party adopted increasingly hard-line tactics on voting and other government overhaul initiatives, rallying around his winner-take-all political style and the outright lies on which he based his attempt to overturn his election loss.