Republicans Are Taking a Sledgehammer to Voting Rights 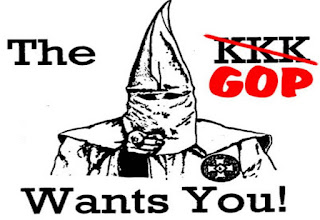 Donald Trump may no longer occupy the White House, but the lies - especially the "Big Lire" that the 2020 election was stolen from him - and racial hatred that were his stock in trade continue to threaten America's democracy.   Frighteningly, despite no evidence and Trump's 60+ court case losses, nearly three quarters of Republicans believe that election fraud is rampant and appear only too willing to back GOP bills being introduced in state legislatures across the country that seek to restrict voting rights, especially for minority voters (although as a piece at CNN notes, the disenfranchisement of younger voters is also part of the GOP voter suppression agenda).  Democrats need to strongly resist Republicans' efforts to make up for their shrinking base by disenfranchising key portion of the Democrat  base.  Pending federal legislation could thwart the GOP effort  but to get it through the U.S. Senate, Democrats may need to end the filibuster, a hold over from the Jim Crow era that benefitted pro-segregation Democrats of that time.  A piece in Vanity Fair looks at the anti-democratic Republican effort.,  Here are excerpts:

Donald Trump’s power grab may have failed, but it’s possible that democracy is now under even greater threat than it was before January 20. The transparent and ludicrous lies that Trump told, over and over, in his desperate campaign to overturn his loss to Joe Biden have now ossified into the official party line, with Republicans across the country attempting—in some cases successfully—to translate the MAGA propaganda into actual laws. The GOP has now put forth bills in 43 states that would dramatically restrict access to the ballot, according to a Brennan Center analysis; in places like Georgia, with Republican-controlled state governments, anti-democracy lawmakers are succeeding. And on Tuesday, the franchise will face perhaps its biggest test in decades when the conservative Supreme Court considers a pair of Arizona laws that could open the floodgates for even more racist voting restrictions.

Democrats, who have lost just one presidential popular vote since 1988 and represent far more Americans on Capitol Hill than their counterparts, are not powerless to protect democracy against attacks by a Republican party that has increasingly embraced Trumpian authoritarianism. They’ve introduced hundreds of their own bills in state legislatures seeking to expand the franchise, and are mobilizing behind a House bill that seeks to knock down barriers to the ballot. But the success or failure of these efforts will almost certainly depend on whether or not Democratic leaders, from the White House on down, fight for Americans’ rights with the same urgency that Trump and the Republicans are fighting to take them away. “Republicans have made opposing voting rights the central tenet of their party,” . . . .

Suppressing the votes of Black Americans and other minorities has long been a key part of the GOP’s election strategy. But their efforts have been even more audacious, bald-faced, and undemocratic in recent months: In swing states where Trump sought to overturn his narrow losses, Republican legislators are using his lies as a pretext for “election security” bills targeting mail-in voting and other measures that expand access to the ballot. In Wisconsin, the GOP has put forth a package that would force voters to show an ID, limit absentee balloting, and that could dampen early voting. Similar legislation is being considered in Pennsylvania. Democratic governors in those states mean the sweeping overhauls proposed by Republican-controlled legislatures probably won’t go far—for now, at least. But things are more concerning in Georgia, where the state House on Monday passed a massive, multi-pronged package of voting restrictions—including one measure scaling back Sunday voting, a direct attack on the “Souls to the Polls” initiative to increase Black turnout.

The GOP’s suppression efforts have always targeted minorities—particularly the Black voters who make up the core of the Democratic base. But under Trump, a man utterly incapable of subtlety, the party has all but done away with pretense. “What I think was really obvious and really upsetting about the 2020 election,” the Brennan Center’s Myrna Perez told NPR last week, “was that there was very little attempt to hide the racialized nature.”

The For the People Act, introduced by Maryland Democrat John Sarbanes, includes a number of anti-corruption reforms, and would expand access to the franchise and restore the Voting Rights Act. The White House has endorsed it, citing the “unprecedented assault on our democracy, a never before seen effort to ignore, undermine, and undo the will of the people, and a newly aggressive attack on voting rights taking place right now all across the country,” and the Democratically-controlled House is poised to pass it. But the bill will run into a buzzsaw in the Senate, where Mitch McConnell and the Republicans are almost certain to filibuster the measure.

Biden is reluctant to end that filibuster. But at a certain point, failing to do so means failing to reckon with the the severity of the threat to democracy—and the particular peril the GOP’s attacks pose to the rights of Black Americans and other minorities. “The argument that preserving the filibuster is necessary because it’s an important tool in our Democracy falls apart when it’s clearer with every passing day that we won’t have a Democracy without Congress passing voting rights legislation,” the former Obama aide David Plouffe remarked Monday. Republicans are mounting a concerted, relentless attack on democracy. To defend against it, Democrats’ response must be proportional. And that means confronting the reality that Trump leaving office didn’t extinguish his Big Lie, but made it more powerful.

I was just posting about this.
I need everybody and their mother to fight the Big Lie.