MAGA Has Never Been About Economics 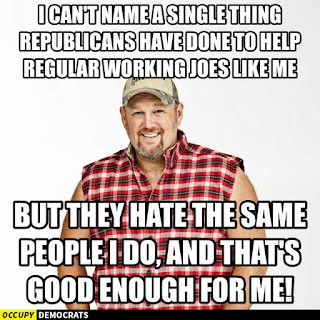 One of the continuing myths of the 2016 and 2020 elections - which some in the main stream media still bloviate about - is that white voters supported Donald Trump as a result of economic dislocation and fears of being left behind by globalization. Trump support (and GOP support to a lesser but still significant extent) revolves around white supremacy and white Christian nationalism that believes any betterment of the lives and acceptance of minorities threatens white privilege. The irony, which has been noted numerous times on this blog, is that Trump's policies and those of the GOP in general damage the economic interests of working class and many middle class voters and remain focused on benefitting the wealthy despite lip service about being the party of the working class.  A column in the Washington Post by a former Republican looks at the lie that allegiance to Trump stemmed from economic concerns and/or pro-working class policies.  Here are column highlights:

Republicans like to bill themselves as a “working-class” party. But just as their refusal to take seriously the real threat behind the deaths and injuries of law enforcement personnel on Jan. 6 strips them of the pretense of being “pro police” or defenders of “law and order,” so too does their economic agenda dispense with the fiction that they are attuned to the interests of working- and middle-class Americans.

The New York Times gives the GOP too much credit when it declares that “Republicans have offered very little to advance the economic interests of blue-collar workers.” The phrase “offered very little” suggests they have been trying but just haven’t managed to come up with something. In reality, they have not been trying to enact a populist agenda.
Let’s review: Republicans backed a tax cut under the last administration that primarily benefited the rich and corporations; attempted to strip health-care coverage from tens of millions of Americans by repealing the Affordable Care Act; and insisted that front-line workers, the elderly and others prioritize the “economy” (i.e. the stock market) over their own health while downplaying the pandemic that has disproportionately affected lower-wage workers. (There are hundreds of examples, including rolling back labor regulations to deprive millions of workers of overtime pay.)

Since President Biden’s inauguration, Republicans have picked up where they left off. They opposed giving middle- and lower-class workers $1,400 checks, raising the unemployment subsidy (for fear their working-class friends would prefer lying on their couches to getting work), providing millions with food subsidies, and supporting states and localities that employ police, firefighters, teachers and other middle- and working-class employees.

It is not simply that Republicans have fallen short in advancing middle- and working-class interests; they have acted in ways directly contrary to the interests of those they claim to represent.

And let us be clear: The MAGA phenomenon was never about economic dislocation. In 2018, a study from the Proceedings of the National Academy of Sciences concluded that “White, Christian and male voters ... turned to Mr. Trump because they felt their status was at risk.” An Iowa study found, “Economic distress is not a significant factor in explaining the shift in Iowa voters from Democrat to Republican between 2008 and 2016. The election outcomes do not signify [a revolt] among working-class voters left behind by globalization.”

The MAGA Republican Party has never represented the interests of working- and middle-class Americans; it and their cult leader have represented the “interests” of those motivated by xenophobia, racism and misogyny — whatever their economic status. We know that statistically voting for Trump correlates most closely with the belief that Whites, not African Americans, are discriminated against and with watching Fox News.

What is the GOP’s “agenda” now? Voter suppression to deter minorities from voting, angry memes that tell the base that elites have contempt for them and Jan. 6 denial. None of this has to do with working-class “interests.” It is about white supremacy.

Republicans use White grievance to rile their base while pursuing economic interests that benefit the wealthy donor class. It is not an anomaly; it is standard operating procedure for the party of White grievance.