The Rise of the Biden Republicans 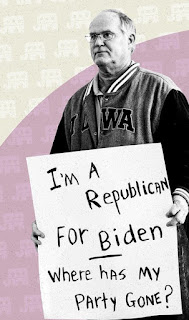 While Donald Trump and Republicans blame minority voters for Trump's loss in 2020 - hence the GOP effort across the country to disenfranchise as many minority voters a possible - a significant reason for the loss was white voters, especially in the suburbs, who failed to rally to Trump's racist message and were disgusted with Trump's mishandling of the coronavirus pandemic which increased the death toll and likely helped fuel the length of societal shutdown. A good portion of such voters were Republicans or former Republicans who wanted competence in government again and more than pandering to white grievances while economically delivering tangible benefit only to the wealthy. Seemingly, Joe Biden and at least some of the Democrat leadership recognize this opening and are out to win so-called "Reagan Democrats" back from the GOP but to also cement bonds with what some are calling "Biden Republicans."  The future of American democracy likely depends on the success of this effort. A piece in Politico Magazine looks at the phenomenon.  Here are excerpts:

It’s been this way since the mid-1980s, when a Yale-based academic and pollster named Stanley Greenberg turned his attention from studying the interplay of class and race in apartheid South Africa to try and explain what was happening in Macomb. In 1960, it was the most heavily Democratic suburban county in the United States. By 1984, it was landslide territory for Ronald Reagan. The population was overwhelmingly white and thoroughly middle class, largely living in tract homes and driving their cars to industrial jobs throughout metro Detroit. They were, by all appearances, Democrats. But they weren’t voting like it. Why not?

After convening a series of focus groups, Greenberg coined a term for these voters — “Reagan Democrats” — and a theory of the case. In these voters’ eyes, “the leaders who were supposed to fight for them seemed to care more about the blacks in Detroit and the protesters on campus; they seemed to care more about equal rights and abortion than about mortgage payments and crime,” Greenberg later wrote. “The old politics has failed them. What they really want is a new political contract — and the freedom to dream the American dream again.” Macomb, he said, “is the site of an historic upheaval that has wrecked the old and promises a new volatile kind of politics.”

For four decades now, that historic upheaval and the quest for the support of “Reagan Democrats” has defined American politics, from the rise of Bill Clinton’s “New Democrats” — which Greenberg, as Clinton’s pollster, had a central role in crafting — to George W. Bush’s “compassionate conservatism,” to Barack Obama’s poll-tested evisceration of Mitt Romney’s venture capital experience, to Donald Trump’s white-grievance mongering and tirades against NAFTA. After Obama won Macomb in 2008 and 2012, Trump captured it in both 2016 and 2020.

Then something important happened: In leaning too hard into white identity politics — and perhaps being too focused on what he thought Reagan Democrats wanted — Trump accelerated the rise of a new voting bloc that is, in many ways, the mirror image of the Reagan Democrats.

Call them the Biden Republicans.

Like the Reagan Democrats, they’re heavily white and live in suburbs. But where the Reagan Dems are blue-collar and culturally conservative, Greenberg sees the Biden Republicans as more affluent, highly educated and supportive of diversity. Historically, they identified with the Republican Party as their political home. But the leaders who were supposed to fight for them seem to care more about white grievance and keeping out immigrants; seem to care more about social issues and “owning the libs” than about childcare payments and college tuition. They don’t consider themselves Democrats — at least not yet — but they are voting for them, delivering them majorities in the House and Senate, and making Joe Biden just the fourth candidate in the last century to defeat an incumbent president.

Now, with the support of Biden Republicans shored up — at least for the time being — Joe Biden is embarking on an audacious gambit that’s gone largely unnoticed, but, if successful, could kneecap national Republicans for a decade: Recapturing the support of the Reagan Democrats.

“Biden is very self-consciously campaigning for Macomb County-type, white working-class voters [for whom] race is not the only thing driving their vote, but who went to Trump [in 2016] because of globalization and their belief that Democrats are not fighting for American workers,” says Greenberg

And that puts Republicans in a strategically difficult position. . . . . In both 2016 and 2020, Trump brought in new voters — people animated by “white nationalism and racial resentment, and whose overwhelming motivation is a deep worry that Black people and immigrants will control the country,” and who are “voting straight-ticket [Republican] to ‘save the country,’” says Greenberg. But by courting those votes, Republicans risk pushing the Biden Republicans further into the Democratic ledger.

“Trump voters, a large portion of them, want a welfare state that is dependable for working people,” says Greenberg. And Biden’s proposed $1.9 trillion Covid relief package could make a tangible difference in their lives. Do the Reagan Democrats stick with non-Trump Republicans if Biden’s Democrats deliver reopened schools, a strong economy, a huge investment in infrastructure and a $3,600-per-child benefit to families on top of a $1,400 stimulus check?

For Republicans, Greenberg sees a reality not unlike the one Democrats faced when he first decamped to Macomb County: “They are going to have to lose a few elections before there can be a new dynamic within the Republican Party — just as the Democrats lost a lot of national elections before Bill Clinton was able to change the party.”

I’m actually stunned by how much consensus there is around using the government to really deliver for people. I think the Biden administration buys that. The gap between the progressive wing and the Biden wing—if that is a wing—is small. You look at the relief package, and there’s like one piece they’re arguing about. But if you look at what they’re agreeing on, introducing a child benefit—not just child care, but also a child benefit, which is more of a European kind of safety net—combined with a great expansion on health care, I think you’re dealing with a big change.

Right now, everyone thinks that government needs to deliver in a big way. I think that scares Republicans. And it will be interesting to see. People are going to see real benefits, not just the $2,000 stimulus piece, but something more enduring. If you look at the proposed $3,600 per child; that’s delivered [in installments] monthly into people’s checking accounts. That not only reduces child poverty; it’s virtually every middle-class person that we are talking about.