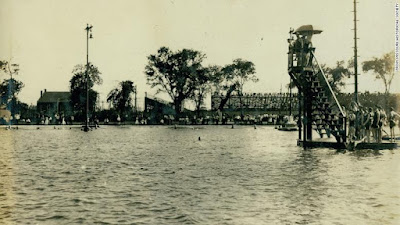 Zero sum thinking and politics - a hallmark of the right and today's Republican Party - insists that anything that adds rights or economic benefit to one group of necessity takes something away from others. Thus, expanded rights and protections for gays means a loss of rights to everyone else.  The same mindset holds true when it comes giving economic benefits to minorities which is depicted as inflicting economic harm on others in society.  The result is that rather than advance policies that benefit everyone, for decades America has refused to direct resources and money to projects and policies that benefit everyone in society.  It's the reason America lags Western Europe in infrastructure improvements - e.g., the British and French rail systems are remarkable - and a decent national health care system.  Those on the right would rather go without benefits themselves than see tax dollars used on programs that support minorities.  A new book makes the case that this mindset not only holds America back but also hurts racist whites.  A piece at CNN looks at the book and it's premise.  Here are highlights:

If you're a White person who thinks racism only hurts people of color, the story behind an empty, abandoned swimming pool in Missouri might just change your mind.

The Fairground Park pool in St. Louis was the largest public pool in the US when it was built in 1919. It featured sand from a beach, a fancy diving board and enough room for up to 10,000 swimmers. It was dug during a pool-building boom when cities and towns competed to provide their citizens with public amenities that promoted civic pride and symbolized a perk of the American dream.

These public pools, of course, were for Whites only. But when civil rights leaders successfully pushed for them to be integrated, many cities either sold the pools to private entities or, in the case of Fairground Park, eventually drained them and closed them down for good.

These closures didn't just hurt Black people, though -- they also denied the pleasures of the pool to White people.

Heather McGhee tells the story of the Fairground Park pool in her powerful new book, "The Sum of Us: What Racism Costs Everyone and How We Can Prosper Together." McGhee employs the metaphor of a drained, cracked public pool to make a larger point: White refusal to share resources available to all US citizens doesn't just hurt people of color. It damages their families and their future, too.

McGhee has a name for this pain. She calls it "drained-pool politics." If you want to know why the US has one of the most inefficient health care systems among advanced nations, some of the worst infrastructure and a dysfunctional political system, blame drained-pool politics, she says.

Those politics are built on a lie that many White Americans have bought for centuries: When Black or brown people gain something, White people lose.

"The narrative that White people should see the well-being of people of color as a threat to their own is one of the most powerful subterranean stories in America," McGhee writes in her book. "Until we destroy the idea, opponents of progress can always unearth it, and use it to block any collective action that benefits us all."

But McGhee's book doesn't just make the familiar "White people are voting against their economic interests" argument that many of us have heard before. She fills it with personal stories from her life and the people she encountered during three years of visiting churches, union halls and small towns across America.

When you think about the picture that Ronald Reagan was trying to paint of government mismanagement and government's poor judgment, you'd already had a decade of the War on Poverty, which was an extension of public benefits across the color line -- from it being up until the 1960s largely for White people.

You think about the ways in which government provided for the common good during the 1930s, '40s and '50s and in ways that built the White middle class. My book includes a section where it lists all the free stuff that the government gave to White families to help them have intergenerational wealth and economic security and how once we began to desegregate, government became stingier and that impacted everybody.

There are some success stories in the country's pandemic response and in places where the vaccine is being delivered well. . . . . And that's the kind of sight to we need to see more of so that we can restore our faith in the possibility of what we can do together. The exact counter to that is in Texas, a state cut off from the federal government to avoid being regulated, to avoid the kinds of safeguards that would have stopped the power outages, a state government that was totally absent from prevention to mitigation and taking care of its people. That was a very clear example of drained pool politics, of anti-government sentiment being put into policies that hurt everyone. It cost lives.