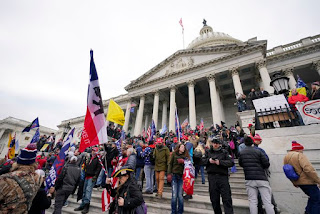 FBI Director Christopher Wray testified before Congress about the January 6th insurrection at the U.S. Capitol and exploded a number of lies being pushed by Republicans at all levels and, of course, the right wing "news outlets" which are now little more than propaganda machines for Trump and lunatics of the far right.  First he debunked the GOP lie that Antifa was involved in the insurrection.  Second, he called the event for what it was: domestic terrorism.  The hearing was part of an effort to lay out how and why security at the Capitol failed so miserably and allowed the sacking of the Capitol in an effort to intimidate lawmakers and to thwart a valid election.  Sadly, to date Proud Boys and Oath Keepers have not yet been legally designated as domestic terrorist organization, but as more evidence of coordination of the attack on the Capitol by members of those groups this will change.  Wray's testimony also pointed to a reprise of the 9-11 situation where different agencies failed to properly consider information about the coming war like attack.  Politico looks at Wray's testimony:

FBI Director Christopher Wray said on Tuesday that the Jan. 6 insurrection has been “an inspiration to a number of terrorist extremists” — foreign and domestic — and that the bureau is still eyeing whether any foreign actors might seek to infiltrate domestic groups to exploit vulnerabilities.

Wray also said he considers the siege “domestic terrorism” and is deploying intensive resources in every field office to pursue perpetrators.

Wray's public comments are his first since the assault on the Capitol, and they come nearly two months after thousands of Donald Trump supporters stormed the building — and hundreds breached the interior — in an effort to stop lawmakers from certifying the results of the 2020 election.

Wray declined to disclose the cause of death of Capitol Police officer Brian Sicknick, who died following the insurrection, and he evaded saying whether a cause of death had been determined. Authorities have been pursuing a suspect seen in riot footage spraying officers, including Sicknick, with a chemical agent. Wray said the matter is still under investigation.

He also said there is “no evidence” that antifa played any role in the Jan. 6 events, despite Trump allies increasingly using that claim as a talking point.

Wray has faced calls for weeks to address the attack, but he remained largely out of view while FBI investigators initiated a sweeping nationwide manhunt to track down and arrest the rioters. Of the more than 300 arrests, alleged offenses range from trespassing and obstructing Congress to conspiracy and assaulting police officers. At least five people, including Sicknick, died as a result of the insurrection.

The effort has also uncovered increasingly dark and well-coordinated plans by Trump-supporting extremist paramilitary groups, including the Proud Boys and the Oath Keepers, dozens of whom descended on Washington and participated in the siege.

Officials in charge of Capitol security have indicated that an FBI warning about the "war"-like posture of the groups gathering in Washington on Jan. 6 failed to reach senior levels and was not sufficiently vetted.

Wray said that the FBI’s Norfolk field office prepared a “situational” report of “raw, unverified, uncorroborated” information that had been culled from material posted online. That material was shared quickly with law enforcement partners. Capitol Police and Washington DC Metropolitan police indicated in earlier hearings that they didn’t view the material as particularly urgent because it was unconfirmed.

Wray said the info was communicated in multiple ways, including electronically and verbally, "as quickly as possible." He said it was disseminated "consistent with our normal process."

It is far past time that "militia" groups be considered terrorist organizations and steps be taken to shut them down and place their leadership behind bars.  As for Republicans, they need to stop aiding and abetting domestic terrorists, including Der Trumpenfuhrer.

Posted by Michael-in-Norfolk at Wednesday, March 03, 2021

Oh, the GOP is now the GQP. QAnon and all those fringe-y, fascist groups ARE the Repug party. Glad somebody cleared the air about it.