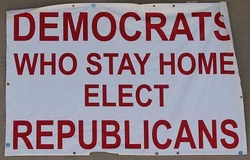 Like many I suspect, I find myself filled with anxiety about Tuesday's election and have a dread that if somehow Trump steals the election, the nation's future as a democracy will be on life support. Being gay, I am well aware that my civil rights are in a bull's eye painted by Justices Thomas and Alito and now the utterly unqualified Justice Barrett. The Trump/Pence regime has waged a relentless war on LGBT rights and it's frightening to think what another four years would bring.  Of course, gays are not the only ones worried, minorities and women have good reason to be fearful as well, as do senior citizens who face the prospect of dying of Covid-19 or seeing Trump and the GOP slash Social Security and Medicare as a further effort to enrich the super wealthy.  This anxiety is driving many to vote as if their lives depend upon it, because that may be the case.  How anyone sane and moral can not vote this years - Democrat, of course - is mind numbing.  A piece in the New York Times looks at the phenomenon.  Here are highlights:

An unnerved yet energized America is voting with an urgency never seen before in the approach to a presidential election, as a record 85 million people have cast ballots despite an array of challenges: a pandemic, postal delays, long lines and court rulings that have tested faith in the country’s electoral system.

In Texas and Hawaii, turnout has already exceeded the total vote from 2016, with three days of early voting remaining and more absentee ballots to be returned. Ten other states, including major battlegrounds like Georgia, Florida, North Carolina, Arizona and Nevada, have surpassed 80 percent of the turnout from the last presidential election. Over all, the early turnout has set the country on course to surpass 150 million votes for the first time in history.

Joseph R. Biden Jr., the Democratic nominee, is counting on a strong early vote to help him flip states like Florida and Arizona that President Trump carried in 2016. But Republicans are banking on their voters to turn out in bigger numbers on Election Day and deliver battleground wins, as they did in key states in 2016.

Though Democrats have maintained an edge in early turnout in nearly every state that has seen record participation, Republicans have been closing the gap. In Florida, for example, 40 percent of the ballots returned came from registered Democrats, and 37.9 percent from registered Republicans, and in heavily Democratic Miami-Dade County, a higher percentage of registered Republicans have voted than have Democrats. Included in those returns are millions of ballots marked no party affiliation, with no indication whether Mr. Biden or Mr. Trump is leading.

“I’m going to vote like my life depends on it,” Marilyn Crowder, 60, said as she waited in a line a block long at Anna B. Day School in Northwest Philadelphia this week. The school, one of 17 early voting locations open for the first time in Philadelphia, has for weeks drawn lines of voters filing down the street.

For Ms. Crowder, a cancer survivor, the pandemic was a motivating factor, as well what she saw as attempts by Republicans to make it harder to vote. “I personally felt powerless to do anything about it, except what I’m doing now,” she said. “And now I’m making phone calls.”

Voters in Pennsylvania, one of the most important battleground states, have been increasingly unnerved by the flurry of litigation regarding the deadline for when ballots can be accepted.

Worries about the U.S. Postal Service have added to the anxiety. The agency said in a filing that staffing issues resulting from the pandemic were causing problems in some facilities, including some in central Pennsylvania. Only 78 percent of employees are available, according to the filing.

Perhaps no state has seen a greater surge than Texas, a suddenly competitive state for Mr. Biden. More than nine million voters had cast their ballots there as of Friday, despite restrictions ordered by [Republican] Gov. Greg Abbott that limited ballot drop-off locations to one per county.

In Georgia, where public polls show the two candidates engaged in a tight race, officials expect overall turnout to increase dramatically and to exceed the 4.1 million people who voted in 2016, when the state supported Mr. Trump over Hillary Clinton by five percentage points.

Pointing to record turnout in absentee and early voting, Brad Raffensperger, the secretary of state, said he believed that as many as six million people would vote.

In Michigan, 2.6 million voters have already cast their ballots, and turnout is nearing 60 percent of 2016 levels. The secretary of state has committed to keeping as many polling locations open as possible on Tuesday.

But Kimberly Korona, 38, of Farmington Hills, took a day off from work to drop off her ballot for Mr. Biden earlier this month — “to save Democracy,’’ she said.

I will be a nervous wreck until we know the outcome.  If rump wins, distraught will not begin to describe my feelings - it might truly be time to leave America and figure out a way to have my children and their families join us in fleeing.

Posted by Michael-in-Norfolk at Saturday, October 31, 2020