The Coming Decade of Democrat Dominance 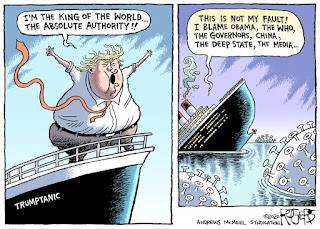 George Will, a former Republican and NeverTrump conservative has a column in the Washington Post which will hopefully prove prophetic: He writes about a what hopefully proves to be a bloodbath for the Republican Party as well as Donald Trump and decade of coming Democrat Party dominance.  Ironically, if this comes to pass, it will all because of Trump and his Republican enablers who put retaining personal power first and foremost while alienating the growing segments of the American populace, particularly Millennials (born between 1981 and 1996) and Generation Z (born between 1997 and 2012) as they pandered to white supremacists and far right Christian extremists.  The other irony is that before the rise of Trump and Will's disavowal of the Trump GOP, Will for too long acted as an apologist for the GOP and its failed policies.  Some of us saw the demographic handwriting on the wall as the GOP focused on shrinking segments of the population and embraced Christofascists.  Better I guess that Will finally saw the light, unlike far too many within the GOP and among my Republican friends.  Here are column excerpts:

By a circuitous route to a predictable destination, the 2020 presidential selection process seems almost certain to end Tuesday with a fumigation election. A presidency that began with dark words about “American carnage” probably will receive what it has earned: repudiation.

After the past four years, Americans know the feeling [of exhaustion], which is why President Trump’s first and final contribution to the nation’s civic health will be to have motivated a voter turnout rate not seen for more than a century — not since the 73.2 percent of 1900, when President William McKinley for a second time defeated the Democratic populist William Jennings Bryan.

His [Trump’s] style has been his substance. His replacement for Obamacare remains as nonexistent as his $1 trillion infrastructure program.

In defeat, Trump probably will resemble another figure from American fiction — Ring Lardner’s “Alibi Ike,” the baseball player whose talent was for making excuses. Trump will probably say that if not for the pandemic, Americans would have voted their pocketbooks, which would have been bulging because of economic growth, and reelected him. Americans, however, are more complicated and civic-minded than one-dimensional economy voters. But about those pocketbooks:

The 4 percent growth Trump promised as a candidate and the 3 percent he promised as president became, pre-pandemic, 2.5 percent during his first three years, a negligible improvement over the 2.4 percent of the last three Barack Obama years. This growth was partly fueled by increased deficit spending . . . . “Recent research suggests that Mr. Trump’s tariffs destroyed more American manufacturing jobs than they created, by making imported parts more expensive and prompting other countries to retaliate by targeting American goods. Manufacturing employment barely grew in 2019. At the same time, tariffs are pushing up consumer prices by perhaps 0.5 percent, enough to reduce average real household income by nearly $1,300.”

Demographic arithmetic is also discouraging for Trump. There are more than 5 million fewer members of his core constituency — Whites without college degrees — than there were four years ago. And there are more than 13 million more minority and college-educated White eligible voters than in 2016.

In Ronald Reagan’s 1984 reelection, voters under 30 were a solidly Republican age cohort; 2020, for the fifth consecutive election, it will be the most Democratic. The Atlantic’s Ronald Brownstein believes this year’s “generational backlash” against Trump presages for Republicans a dismal decade during which two large and diverse cohorts — millennials (born between 1981 and 1996) and Generation Z (born between 1997 and 2012) — become, together, the electorate’s largest bloc in an electorate . . . . In 2016, Trump won just 36 percent of adults under 30; Obama averaged 63 percent in two elections. Furthermore, this will be the first presidential election in which the number of millennial and Generation Z eligible voters will outnumber eligible baby boomers. Generation Z is 49 percent people of color.

This nation and its patience are exhausted.

As demographic changes continue to run against the GOP, that Party's efforts at voter suppression in the long run will be like rearranging the deck chairs on the Titanic.  All of these changes have been predicted for years and the GOP and especially Trump consciously chose to ignore them.  Again, I hope next Wednesday is a record breaking bloodbath for the GOP - and of course Trump. It will be so well deserved.