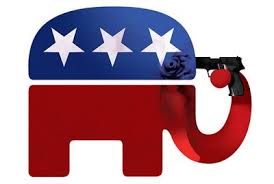 As this blog has noted frequently over the years, the Republican Party seemingly has made a suicide pact with its aging and shrinking base that has lead the party to increasingly alienate anyone who isn't white, super wealthy or a religious extremist. With luck, this focus will result in Donald Trump's defeat on November 3, 2020 - or as soon thereafter as ballots are fully counted.  Having been actively involved in politics for nearly 30 years, I still am dumbfounded by the short sightedness of the GOP leadership. Yes, the leadership is afraid of the party base - Christian fanatics and white supremacists - yet they allowed them to hijack the party, particularly over the last two decades.  As I have often noted, one cannot just decide to join a Republican city or county committee, you must be voted on to it.  Individuals who should NEVER have been voted on to committees all across the country. As I was leaving the GOP, in Virginia Beach the head of the local Christian Coalition was voted into the position of vice-chair of the Virginia Beach GOP.  A piece in The Atlantic looks at how these foolish - I would argue down right stupid - decisions of the past is poised to catch up with the GOP.  In my view, it cannot happen soon enough.  Here are article excerpts:

The coming generational backlash against Donald Trump may represent only the first tremor in a much larger earthquake threatening the GOP through the 2020s.

Trump is eroding the Republican Party’s position with younger voters at precisely the same time as the massively diverse Millennials and Generation Z are poised to become the largest voting bloc in the electorate, as new research released this week shows.

That prospect presents both a near- and long-term danger for the GOP. The immediate problem is that polls nationally and in key swing states show Joe Biden positioned to significantly expand on Hillary Clinton’s margin among younger voters, even as many more of them are signaling they intend to vote than did in 2016.

“There’s a consistent picture coming together that says we’re going to have the highest youth turnout since 2008, and maybe since 1992,” Ben Wessel, the executive director of NextGen America, a group working to mobilize younger voters for Democrats, told me. “And they are rebuking Trump and the Republicans in a way we haven’t seen since the 2008 presidential” race.

If anything, the longer-term trends may be more ominous. The electorate is beginning its most profound generational transition since the early 1980s, when Baby Boomers became the largest voting bloc, dislodging the Greatest Generation of Americans, who came of age during the Depression and World War II.

In 2020, for the first time, Millennials and Gen Z (which comprise young adults born in 1981 or later) will equal Baby Boomers and prior generations (older adults born in 1964 or earlier) as a share of all Americans eligible to vote, according to a new study from the nonpartisan States of Change project. Because older voters typically turn out at higher rates than younger ones, the study forecasts that those earlier generations will still cast more ballots next month, by a margin of 43 percent to 32 percent. But in 2024, the two younger generations are expected to equal the older ones as a share of actual voters on Election Day. And by 2028, Millennials and Gen Z will dwarf the older generations as a share of both eligible and actual voters.

Given that the younger generations align much more closely with Democratic ideological views on almost all policy questions, this shift underscores the stakes in the generational roulette Trump has played by defining the GOP so narrowly around the priorities and preferences of his core groups: older, nonurban, non-college-educated, and evangelical white people. If Democrats can not only express the values of younger Americans, but also advance their material interests, they will have a substantial advantage in building electoral majorities through the decade ahead . . . .

Most of the generational discussion in the 2020 election has focused on Biden’s potential to run better among seniors than any other Democratic presidential nominee since Al Gore in 2000. And that indeed has enormous implications for his ability to claw back votes in Trump states with large older populations, particularly Florida, Arizona, Michigan, Pennsylvania, and Wisconsin.

But many analysts believe that the Democratic resurgence among preponderantly white seniors is a temporary phenomenon rooted in voters’ comfort with the 77-year-old Biden and their discontent over Trump’s chaotic handling of the coronavirus pandemic. The shift among younger generations could have a much more enduring impact on the country.

Before Millennials entered the electorate in large numbers in the 2004 election, adults younger than 30 had generally tracked voting preferences of the country overall, without providing any particular advantage to Democrats;

But in the years since, the Democratic advantage among younger adults has swelled. In 2004, John Kerry won 54 percent of them. Barack Obama won 66 percent of them, compared with John McCain’s 32 percent in 2008, before topping Mitt Romney in 2012 by a narrower margin: 60 percent to 37 percent.

In 2016, Trump didn’t improve on Romney’s performance—he won only 36 percent of adults younger than 30—but Clinton substantially retreated from Obama’s.

But despite all that, Democrats are optimistic that Biden can rebuild his vote share with younger adults—at least up to Obama’s 60 percent showing in 2012, and maybe even his towering 66 percent in 2008. Public polls—such as recent Marist Institute, Harvard University Institute of Politics, and Pew Research Center national surveys—generally show Biden at about 60 percent. But Wessel said that, given antipathy toward Trump, the higher number is within Biden’s reach. He notes that two-thirds of younger adults supported Democrats in House races during the 2018 midterms. “We see even people who self-identify as young Republicans disagree with Trump on almost every issue,” Wessel told me.

States of Change anticipates that Millennials will actually plateau at about one-fourth of both eligible and actual voters between now and 2036. The biggest change to the electorate will be the explosive growth of Gen Z, which will increase from a projected 8 percent of actual voters this year to 29 percent in 2036. That year, the two generations combined will comprise a clear 55 percent majority of all voters. As soon as 2028, States of Change expects them to outvote the Boomers and even older generations by a double-digit margin.

Strikingly, this transition will be as powerful in the older, mostly white states of the Rust Belt as it will be in the younger, more diverse, and rapidly growing Sun Belt states. According to the previously unpublished States of Change projections, by 2028, the giant younger generations will comprise at least 40 percent of actual voters not only in Colorado, Georgia, Texas, and Arizona, but also in Michigan, Wisconsin, Pennsylvania, Minnesota, Ohio, and Iowa.

That’s a worrisome trend for Republicans. In another study by Pew, analysts concluded that “similar to Millennials, Gen Zers are progressive and pro-government, most see the country’s growing racial and ethnic diversity as a good thing, and they’re less likely than older generations to see the United States as superior to other nations.” All of that clangs against the agenda Trump has stamped on the GOP, of open resistance to racial and cultural change.

[T]he generational challenge facing Republicans seems much more acute. The American Values Survey showed that big majorities of adults ages 18 to 49 expressed views antithetical to the dominant GOP positions on racial equity, immigration, economic inequality, abortion, building a border wall, and the value of a society that is both racially and religiously diverse.

In all these ways, Trump’s belligerent politics has created an opportunity for Democrats to cement a lasting generational advantage not seen perhaps since Franklin Roosevelt built his sturdy New Deal coalition during the Depression.

If Democrats win the White House in November and can put Millennials and Gen Z on a better financial trajectory, “they will have an incredible opportunity” to solidify a durable majority electoral coalition, Teixeira said.