Can Chief Justice John Roberts Save His Court 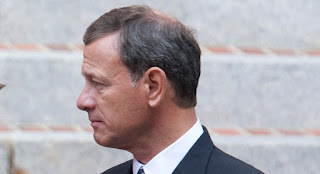 This evening Senate Republicans rammed through the appointment of Amy Coney Barrett - someone likely 85% of Catholics would view as a severe nutcase and religious extremist - to a lifetime position on the United States Supreme Court.  In the process, the Senate Republicans made a mockery of their feign convictions for blocking Barack Obama's nominee, Merrick Garland, and defied the will of a majority of Americans.  Worse yet, they have likely destroyed popular support of the Court and rendered any rulings it hereafter hands down illegitimate in the eyes of a majority of Americans. Sadly, it is just one more horrific example of how Donald Trump and his Republican enablers have destroyed so many American institutions and government bodies. Unless and until Joe Biden wins the White House and Democrats win control of the U.S. Senate and expand the size of the Court, Chief Justice John Roberts is perhaps the only individual who may be able to save the legitimacy of the Court.  A column in the Washington Post looks at the situation.  Here are excerpts:

Monday’s Senate confirmation of Amy Coney Barrett to the Supreme Court, preceded by a pell-mell scramble to seat her before next week’s election and scheduled to be followed by an unseemly campaign-style celebration at the White House, shreds whatever remained of the high court’s integrity and independence.

Whether the court regains its independence or cements itself as a third partisan branch of government is now largely up to Chief Justice John Roberts. If he does not act, and fast, to mitigate the court’s politicization, Democrats will be fully justified in expanding the court’s membership to restore balance — and indeed will face a public outcry if they don’t.

The Barrett spectacle could not have been uglier. It began with a superspreader event at the White House after which a dozen people, including President Trump, contracted covid-19. Trump insisted on naming a replacement even before Ruth Bader Ginsburg was in her grave, and he belittled the late justice’s granddaughter for conveying the women’s rights icon’s dying wish that Trump not replace her.

Senate Republicans rammed through Barrett eight days before an election Trump seems likely to lose, and even though Trump has made clear he’s counting on the Supreme Court to overturn the result. They did this in an extraordinary public display of hypocrisy, four years after refusing to seat an Obama nominee to the high court because, they said then, that doing so more than eight months before an election was too soon. And they did this after abolishing the minority’s right to filibuster.

Barrett, in her confirmation hearing, made a mockery of the supposed “originalism” and “textualism” she professes to practice. She conspicuously refused to say whether a president could unilaterally postpone an election and whether voter intimidation is illegal — matters unarguable under the clear words of the Constitution and statutes.

[F]ew even pretended they were engaged in some historic or noble tradition. The debate sounded more like a medical conference as Democrats warned about the many conditions that might not be covered if Barrett strikes down the Affordable Care Act after it comes before the court in two weeks.

If the chief justice wishes to restore dignity to the Roberts Court, it’s clear enough what needs to be done:

He can lean heavily on Barrett to recuse herself from any case arising from the presidential election next week.

He can use his influence to make sure the court upholds the Affordable Care Act after it hears arguments next month — not a legalistic punt on technical matters of “severability” but a ruling that puts an end to the constant assaults on Obamacare.

He can persuade his conservative colleagues to join him in upholding the rights of LGBTQ Americans as established in the 2015 Obergefell case, by rejecting a challenge to it by Catholic Social Services that will be argued the morning after the election next week.

He can forge a majority to reject Trump’s latest tired attempt to use the Supreme Court to further delay handing over his financial records to New York prosecutors.

And he and his colleagues can agree to hear one of the many challenges to Roe v. Wade now making their way through lower courts — and vote to uphold Roe for now. That would be the surest sign that the Roberts Court is not going to turn (immediately at least) into the reactionary caricature that most expect.

If Roberts and his conservative allies on the court don’t do at least some of this in the next few months, they can count on being joined next year by a whole batch of new colleagues.