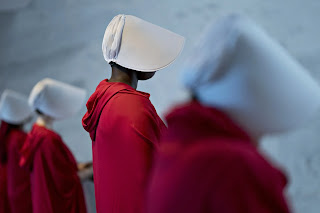 Donald Trump and his Senate Republican enablers - and, of course the talking heads on Fox News - blather about Amy Coney Barrett being "highly qualified" and "experienced," yet the reality is that she is the least qualified individual to be nominated to the Supreme Court since Clarence Thomas, the Court's perennial mental midget, was nominated in 1991 and sadly confirmed.  Like Barrett, Thomas was selected for his ideology, not his experience or previous legal work.  He represented a reactionary black man who allowed the Republicans to nominate a black justice who has since undermined the rights of millions of black Americans.  Barrett is a similar reactionary zealot and when appointed - the GOP cares nothing about her lack of credentials - will undermine the rights of millions of American women, gays, and likely blacks as well (when pressed, she grudgingly said Brown v. Board of Education was rightly decided).  A piece in Mother Jones looks at Barrett's lack of credentials, including the fact that she has never tried a single case - something that I as a office practice based corporate/commercial law attorney have done on a number of occasions, plus I have written numerous appellate briefs, unlike Barrett.  Here are article highlights:

Supreme Court nominee Amy Coney Barrett took some heat from Sen. Richard Blumenthal (D-Conn.) during her confirmation hearing last week, when he pressed her on her failure to turn over additional relevant documents to the committee, including an anti-abortion newspaper ad she’d signed in 2006. Barrett responded that she had submitted 30 years’ worth of material to the committee, and that she had simply missed the 15-year-old ad. “I produced 1,800 pages of material,” she insisted, implying that this submission was voluminous.

In the world of Supreme Court nominees, however, 1,800 pages of documents barely registers as a footnote. Chief Justice John Roberts rustled up 75,000 pages of records for his 2005 confirmation hearing—just from his time serving in Republican administrations. The Senate reviewed about 170,000 pages of records before confirming Justice Elena Kagan and 180,000 for Justice Neil Gorsuch. No one even comes close to the document dump from Justice Brett Kavanaugh

[T]he relative paucity of Barrett’s is an indication of just how circumscribed her legal experience has been compared with virtually all of her predecessors—and even one nominee who was ultimately denied the position. The permanent record of the 48-year-old former Notre Dame law school professor is in direct proportion with her resume, which is strikingly thin for someone nominated to a lifetime position on the Supreme Court. By almost any objective measure, Barrett is the most inexperienced person nominated to the Supreme Court since 1991, when President George H.W. Bush nominated Clarence Thomas, then just 43, to replace the legendary Thurgood Marshall.

Barrett’s limited CV did have an upside: It’s one reason that Republicans have been able to rush her confirmation hearings and vote on her nomination, which the Judiciary Committee did Thursday without a single Democrat in the room. (The full Senate will vote on it Monday.) There’s simply not that much in her record to review.

But Barrett’s insular professional history raises some pertinent questions about her nomination that go beyond how she might rule on hot-button social issues: How did a professor from a second-tier law school with such a shallow reservoir of experience manage to leapfrog to the top of the list of potential Republican Supreme Court nominees? And why were Republicans, who have spent decades obstructing legislation that would help women advance in the workplace, so eager to promote this particular under-credentialed, female candidate?

Barrett has spent virtually all of her professional life in academia. Until President Trump nominated her to the 7th Circuit Court of Appeals in 2017, she had never been a judge, never worked in the government as a prosecutor, defense lawyer, solicitor general, or attorney general, or served as counsel to any legislative body—the usual professional channels that Supreme Court nominees tend to hail from. A graduate of Notre Dame law school, Barrett has almost no experience practicing law whatsoever—a hole in her resume so glaring that during her 7th Circuit confirmation hearing in 2017, Democratic members of the Senate Judiciary Committee were dismayed that she couldn’t recall more than three cases she’d worked on during her brief two years in private practice. Nominees are asked to provide details on 10.

But by the time Trump picked him [Kavanaugh] to replace Kennedy, he had spent 12 years on the appellate court and written hundreds of opinions. Trump’s other appointee, Justice Neil Gorsuch, had been an appellate court judge for 11 years before Trump nominated him to fill the seat vacated by the late Justice Antonin Scalia. Justice Sonia Sotomayor had been an assistant district attorney in New York City, a solo practitioner, and later a corporate litigator and law firm partner. She had been a federal judge, first at the trial court level, and then on the 2nd Circuit Court of Appeals, for 17 years before Obama tapped her for the Supreme Court.

As for Kagan’s 15 years in academia, she wasn’t just any law professor, teaching three classes a year as Barrett did during her 15 years as a full-time law professor. In 2003, Kagan became the first female dean of Harvard Law School, where she had also studied. At the nation’s largest and most prestigious law school, Kagan oversaw a $400 million capital campaign, an operating budget of $180 million, and 500 employees.

Even Harriet Miers had a more substantial legal background than Barrett. Miers was the last woman a Republican president tried (though failed) to put on the high court. . . . Miers had once been a Democrat and conservatives attacked her credentials, suggesting that while she’d litigated and argued a host of cases in federal and state courts, they weren’t the right kind of cases. (Flash forward to Barrett, who has never litigated anything in federal court.)

Barrett is not the only conservative woman with a shallow CV to benefit from an assist from the Federalist Society. Sarah Pitlyk, a former Kavanaugh clerk who had previously worked at an anti-abortion legal nonprofit, is now a Trump-appointed judge on the US District Court for the Eastern District of Missouri. A unanimous committee of the ABA rated her unqualified for the seat, in part because of “a very substantial gap” in her resume.

Historically, Maxwell says, the conservative movement has made an exception for women like Barrett as long as they are furthering its anti-feminist agenda. She compares her to another Catholic superwoman of the religious right, the late Phyllis Schlafly, mother of six, who worked full time to defeat the Equal Rights Amendment as part of her lifelong campaign to keep mothers out of the workplace.

“She’s clearly very intelligent,” Maxwell says of Barrett, but her nomination is reminiscent of the time when Sen. John McCain (R-Ariz.) was trying to find a woman to put on the 2012 GOP presidential ticket and emerged with Sarah Palin.

Barrett also checks another important box for the religious right: Men who would like to see the Supreme Court overturn the landmark abortion rights case Roe v. Wade have long hoped to have a woman cast the deciding vote. “It washes away the stench of it being sexist if it’s coming from a woman,” Maxwell says. Having not just a woman but one with seven children poised to overturn Roe explains conservatives’ outsize enthusiasm for a nominee whose professional record falls short when compared with most Supreme Court justices. “That is really part of the symbolic strategy,” Maxwell says. “I can still have it all, adopt the babies, have all of the children, cherish life, and still have all the success that every woman wants.”