America Is About to Choose How Bad the Pandemic Will Get 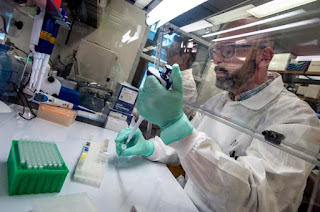 In the upcoming election Americans will be choosing a new president and numerous other elected office holders.  It will also be choosing how bad the ongoing pandemic will become. Trump has horrifically botched the American response to the pandemic and basically has had no plan to bring it under control and is ignoring - and even ridiculing - health care experts.  In contrast, Joe Biden represents someone who will implement a plan and listen to the experts.  The choice at the presidential level is in short a choice for a worsening pandemic versus attempting to gain control of the pandemic and eventually bringing the nation back to normal. A piece in The Atlantic looks at this stark choice which will literally determine if some Americans live or die.  Here are article excerpts:

[Trump’s] The president’s response to the pandemic should not have been a surprise. In December 2016, a month before Donald Trump was inaugurated, I asked how a pandemic would play out during his term. The question was not idly put: Every recent president before Trump had been challenged by epidemics, and Trump’s actions as both a citizen during the 2014 Ebola outbreak and a candidate on the campaign trail had been troubling. His record suggested that come a pandemic, he would lie, spread misinformation, opt for travel bans in lieu of more effective measures, and heed his own counsel over that of experts.

In the 2020 election, on top of every routine test of character and capability, the candidates must answer the challenge the coronavirus has brought to this country. Trump’s response has been so lax as to effectively cede the country to a virus whose spread is controllable. He has, by his own admission, repeatedly downplayed the threat after he became aware of how dangerous the new coronavirus could be.

Trump is still downplaying the pandemic, urging Americans not to “let it dominate your life” even after 210,000 had already lost theirs. One week ago, when asked if “there was anything that you think you could have done differently,” he said, “Not much.”

As November nears, the coronavirus is surging again, with cases rising to record-breaking heights for the third time. To control the pandemic, changes are necessary, but Trump has proved that he does not learn from his mistakes—perhaps the most costly of his failings. If he is reelected, he will continue on the same path, and so will the coronavirus. More Americans will be sickened, disabled, and killed. Donald Trump is unchanging; the election offers an opportunity for the country to change instead.

The near-term future is already set. Trump has repeated the lie that numbers are spiking because the U.S. tests extensively; in fact, the climbing cases have far outpaced the rise in testing, and are due instead to the rapidly spreading virus.

The workforce of health-care providers is missing more than 1,000 colleagues who have died of COVID-19. And while the two previous surges were concentrated in specific parts of the U.S., allowing health-care workers from more tranquil regions to help colleagues in the hardest-hit ones, the current surge has lit up most of the country. Reinforcements will be scarce.

Death rates always lag behind cases and hospitalizations. During the national death rate’s recent plateau, about 700 people were still dying every day, and that rate has risen by 15 percent in the past two weeks. It will climb further. This is not, as Trump baselessly suggested, because doctors and hospitals are overcounting COVID-19 deaths to “get more money”; in fact, deaths are undercounted. COVID-19 has already become the second leading cause of death in the U.S. this year after heart disease (or the third, if you lump all cancers together).

[T]here is a real risk that Americans will become habituated to this horror, and that COVID-19 will become another unacceptable thing that the U.S. learns to accept. That is all but inevitable if Trump wins a second term. His administration has given no indication that it will dramatically change its strategy. If anything, it has doubled down. It is allowing the virus to freely spread among younger people in the hopes of reaching herd immunity—an unfeasible strategy that has been widely panned by the scientific community. Such a strategy could leave millions dead, and many others with chronic illness.

Vaccines will arrive, but not quickly enough to put a dent in the ongoing surge.

And yet, the pandemic is not impossible to control, . . . . Masks can stop people from transmitting the virus. Shutting down nonessential indoor venues and improving ventilation can limit the number of super-spreading events. Rapid tests and contact tracing can identify clusters of infection, which can be contained if people have the space and financial security to isolate themselves.

The playbook is clear, but it demands something that has thus far been missing—federal coordination. Only the federal government can fund and orchestrate public-health measures at a scale necessary to corral the coronavirus. But Trump has abdicated responsibility, leaving states to fend for themselves. In May, I asked several health experts whether governors and mayors could hold the line on their own. Most were doubtful, and the ensuing months have substantiated their fears.

We do not know how Joe Biden would fare, and if he is elected, the U.S. will still be riddled with systemic weaknesses and inequities that another pathogen could also exploit. But we do know exactly how Trump will react to the next crisis. The U.S. is trapped in a pandemic spiral, and so is Donald Trump.

Science values replication—repeated experiments that verify whether the same outcome occurs. But in this case, that work is unnecessary. The U.S. has now clearly seen what happens when a pandemic occurs under Trump. It is an experiment that no one should ever want to rerun.

You know some people only think about themselves and how THEY are doing. They'll always vote Repug because they're empty vessels without a hint of a soul.
Cheeto voters do not care about other people or the country. They only care about themselves. They don't believe in science. They believe in the almighty dollar.
Biden will not not solve systematic racism or the pandemic or unemployment but he will do a much, much better job than IMPOTUS.