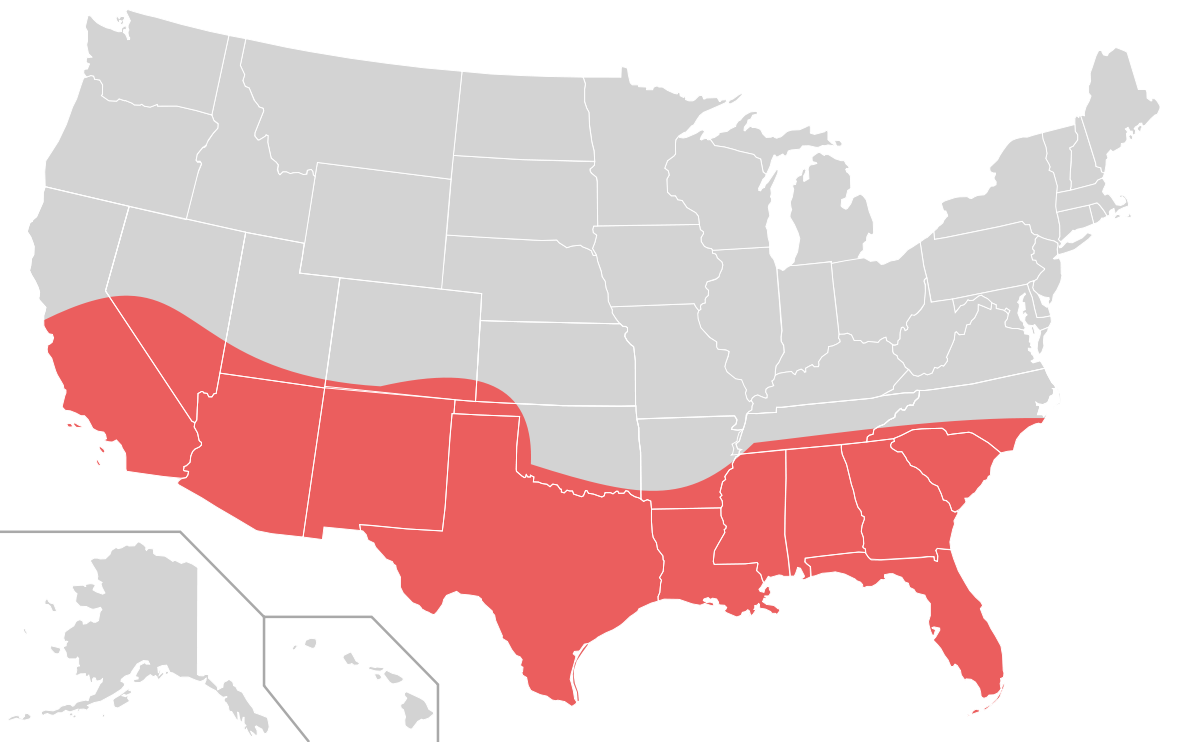 I "came out" almost nineteen years ago and finally broke all ties to the Republican Party shortly thereafter given the Party's take over by Christofascists and the Party's aggressive anti-gay agenda which included support for sodomy laws and bans on even civil unions for same sex couples.  Here in Virginia at that time the Virginia GOP made the conscious decision to double down on its efforts to pander to rural voters and Christian extremists to the exclusion of moderate to liberal suburban voters. Subsequently, open white supremacists were welcomed into the Virginia GOP base.  Nationally, the GOP made a similar conscious decision to reject growing population areas in favor of shrinking rural areas. In Virginia, the result has been that the Virginia GOP has not won a statewide race in eleven years and the state is increasingly viewed as a blue state - all the result of what I warned Republican friends was a form of slow political suicide.   Now, that same slow suicide may be accelerating on a national level with the Covid-19 pandemic perhaps being the spark needed to see a sea change in 2020.  A lengthy piece in The Atlantic looks at the GOP's potential losses in states like Arizona, Texas, North Carolina and Florida all thanks to Trump and the GOP's suicidal focus on an aging and shrinking rural base.  Here are article highlights:

The wildfire of coronavirus cases burning through the Sun Belt’s largest cities and suburbs could accelerate their movement away from President Donald Trump and the GOP—a dynamic with the potential to tip the balance in national elections not only in 2020, but for years to come.

Until the 2016 election, Republicans had maintained a consistent advantage in the region’s big metros—including Atlanta, Houston, Dallas, and Phoenix—even as Democrats took hold of comparable urban centers in other parts of the country. But under Trump, the GOP has lost ground in these diverse and economically thriving communities. And now, a ferocious upsurge of COVID-19 across the Sun Belt’s population hubs—including major cities in Florida and North Carolina where Democrats are already more competitive—is adding a new threat to the traditional Republican hold on these places.

In 2016, Trump won all five of the large Sun Belt states that could be battlegrounds in November. But the improving Democratic performance in the big metros provides Joe Biden a beachhead to contest each of them. Polls consistently give the former vice president a lead in Arizona and Florida, show him and Trump locked closely in North Carolina, and provide the president only a small edge (at best) in Texas and Georgia. New York Times/Siena College polls released today give Biden solid leads in Arizona, Florida, and North Carolina, and commanding advantages in the major population centers of each state, including Phoenix, Miami, Charlotte, and Raleigh. Fox News polls also released today show Biden leading Trump narrowly in North Carolina, Georgia, and (even) Texas, while opening up a comfortable 9-point advantage in Florida.

Even the Republicans relatively confident that Trump’s grip on rural voters will allow him to hold most, if not all, of these states recognize the implications of a trend that has them losing ground in the communities that are preponderantly driving economic and population growth.

“The trends of 2016, ’17, ’18 are continuing apace, with continuing weakness of the Republican brand in suburban areas that had traditionally voted Republican, coupled with strengthening of the Republican brand in rural areas that had traditionally voted Democrat,” Whit Ayres, a Republican pollster who has long specialized in southern suburbs, told me. “The problem, of course, is that the Republicans are trading larger, faster-growing areas for smaller, slower-growing areas, and the math does not work out in the long run with that sort of trade.”

The new twist in this ongoing reconfiguration is the coronavirus. . . . . . the number of new cases in and around Sun Belt cities is exploding. “If we stay on this current trajectory, then we will overwhelm our hospitals” in July, Steve Adler, the mayor of Austin, Texas, told me yesterday, echoing the public alarms of many mayors across the region.

The trend lines are daunting. From May 23 through Tuesday, the total number of confirmed cases more than doubled in the counties centered on Austin (Travis), Houston (Harris), and Dallas; nearly doubled in Fort Worth (Tarrant); and roughly tripled in San Antonio (Bexar). In Maricopa County, Arizona, which comprises Phoenix and its sprawling suburbs, the total number of cases more than quadrupled

Public-health experts expect the numbers to continue rising for weeks. In Arizona, “we are experiencing a second surge after an early-May plateau,” Joe Gerald, a professor at the University of Arizona College of Public Health, told me. “This surge is much larger than the first one and basically our foot is still on the accelerator. It is going to get worse before it gets better.”

Across almost all of the Sun Belt states, the spikes are exacerbating tensions between Republican governors who rely mostly on suburban and rural areas for their votes, and Democratic local officials in the most populous cities and counties. Taking cues from Trump, Republican Governors Ron DeSantis in Florida, Brian Kemp in Georgia, Greg Abbott in Texas, and Doug Ducey in Arizona have all moved aggressively to reopen their state economies; refused to deviate from that course as the caseloads have increased; and blocked municipal officials from reversing or even slowing the pace of the reopening.

The one concession from DeSantis, Abbott, and Ducey has been to allow local governments to require some degree of mask wearing. But experts say that requirement alone, especially given the uncertainties of compliance and enforcement, cannot stop the rapidly rising caseload in these states. “I don’t think [masks] are going to be sufficient to slow the spread or prevent us from exceeding our hospital capacity,” Gerard told me.

For Trump and the GOP, an urban/suburban backlash against these Republican governors—combined with a broader negative verdict on the federal pandemic response—risks accelerating the trends reshaping metropolitan politics across the Sun Belt.

Democrats are now finally seeing the same trends fortify their position in the Sun Belt population centers.  Take Gwinnett and Cobb counties, outside Atlanta. In 2014, Republican Senator David Perdue, who’s up for reelection in November, won comfortable margins of about 55 percent in each. In 2016, though, Hillary Clinton won both by relatively narrow margins against Trump, and in 2018, the Democratic gubernatorial nominee, Stacey Abrams, carried them more resoundingly. Abramowitz expects them to continue moving toward the Democrats in 2020, with margins sufficient enough to give Biden and Perdue’s Democratic opponent, Jon Ossoff, a competitive shot at the state, and also to flip an open U.S. House seat in Gwinnett.

In Texas, the arc looks similar. The University of Houston political scientist Richard Murray has charted a clear blue bend in voters’ political preferences in the 27 counties that comprise the state’s four huge metro areas—Houston, Dallas, San Antonio, and Austin—which together account for about 70 percent of the state’s votes and jobs.

Murray said he expects Biden to capture as much as 58 percent in November. With the higher presidential-year turnout, he predicts, that could produce an advantage of more than 1 million votes for Biden in and around those four cities. Murray said there is no guarantee Trump can squeeze out enough rural votes to hold Texas. But even if he does, the GOP faces some brutal arithmetic: As Ayres and Murray both noted, it’s relying more and more on the places that are shrinking or stagnant in population while retreating in the growing places. This problem is especially acute in Texas, Murray said, because the metropolitan areas are among the nation’s fastest growing, and they are becoming much more racially diverse as they expand.

[F]or November, Arizona is the state where these dynamics may matter most. Many Democrats see Arizona, which Democrats have carried only once since 1948, as Biden’s best chance to reach 270 Electoral College votes if he can’t dislodge Trump’s hold on either Wisconsin or Florida.

Maricopa County is the key to those hopes. It was the biggest county in America that Trump won in 2016, when he carried it by almost 45,000 votes. But in 2018, it propelled the Democratic Senator Kyrsten Sinema to her victory when she took it by about 60,000 votes. Noble’s recent polls have consistently found both Biden and Democratic Senate candidate Mark Kelly leading their respective Republican opponents by roughly double digits in the sprawling county . . . . no matter how much Republicans run up the score, as Trump is likely to do, in the state’s rural regions. “They are still in trouble in Maricopa County,” he said.

Republicans are leaking support from two groups in Maricopa: college-educated white voters (especially women) and seniors. Both populations are among those who have expressed the most concern about the coronavirus, even before the fearsome surge now buffeting the area.

Trump’s response? When he stopped in Maricopa for a rally in north Phoenix on Tuesday, he did not wear a mask or require one for those attending the event, despite public pleas to do so from Mayor Kate Gallego. He barely mentioned the outbreak in his 90-minute speech. In other words, even while visiting metropolitan Phoenix, Trump’s focus seemed to be on his preponderantly white base in the exurban and rural communities beyond it.

Across the Sun Belt, November will test whether Trump’s base-first strategy can overcome the resistance that’s coalescing against him in the population centers now confronting the full force of the coronavirus outbreak.