Americans Are Recognizing The U.S. is Falling Behind its Peers 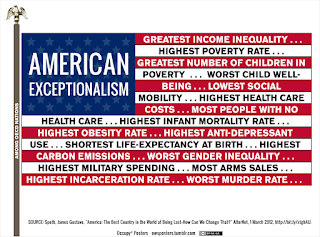 I have been a long time critic of the concept of American exceptionalism - something that is far more myth than reality.  In fact, when America is measured by its peers across the rest of the developed, industrialized world, it comes up short.  If America is exceptional, it is a negative way.  America has some of the highest levels of childhood poverty, a crumbling infrastructure, insane levels of gun violence, millions who lack access to quality health care, a declining life expectancy, declining opportunities for upward social mobility - a number of European nations have better options for upward mobility - and a pathetic social safety net.  As a column in the Washington Post notes, one positive aspect of the Covid - 19 pandemic is that Americans are increasingly willing to open their eyes and face the fact that America is falling behind much of the rest of the developed world. The piece also suggest part of the problem: the obstruction of the Republican Party which remains focused on benefiting the wealthy at the expense of everyone else.  Possibilities for change and improvement exist, but they begin with the need for political change.  Here are excerpts:

Americans’ belief in American exceptionalism is declining — and that could be a good thing. National narcissism has rendered us complacent, even impotent, in the face of multiple crises.

On our biggest societal problems, the United States seems to have given up. Not because we can’t do better — but because many political leaders, particularly Republicans, apparently don’t think we need to. Their faith that America is already Living Its Best Life means there’s no need to learn from peer countries, or even gauge our relative performance. Consider:

Most of the rest of the developed world has managed to get covid-19′s spread under control. New cases across the European Union have plummeted; in New Zealand, the virus has been virtually wiped out. These and other places that have successfully mitigated the spread have enabled more citizens to safely return to their pre-covid-19 lifestyles, including even attending athletic events with packed crowds.

Meanwhile, here in the United States, the bodies pile up. New confirmed cases are again surging, especially across Sun Belt states. And political leaders seem to have no plan, nor even a plan to make a plan, for beating back the pandemic. Instead, they simply declare the virus vanquished, even as it claims more lives.

How did a country once known for our get-up-and-go come to shrug off mass death, particularly when other countries’ records suggest many U.S. covid-19 deaths were preventable?

Faith in American exceptionalism has curdled into resigned acceptance. We got so accustomed to resting on our laurels that we fell asleep.

This is of a piece with our supine responses to other national challenges that are unusually (sometimes uniquely) American. Much as they gave up on coronavirus containment, U.S. political leaders previously gave up on solving our epidemic of gun violence. And on our high numbers of police-perpetrated killings. Also our high rates of child poverty, uninsurance and carbon emissions.

On these and other metrics, the United States fares worse than most if not all other industrialized countries. Yet U.S. officials — from one party in particular — treat these crises as imaginary or unsolvable.

On the occasions political leaders do acknowledge that we’re not measuring up to peers, they excuse the failing as a trade-off necessary to pursue some other, supposedly superior American ideal. America can’t protect schoolchildren as other countries do, because we must prioritize unfettered access to firearms. America can’t save its grandparents from covid-19, because the Dow takes precedence. America can’t guarantee everyone health care, because [something something] liberty.

But there may be a ray of hope: Recent crises — involving health, the economy and police brutality — seem to have caused more Americans to question their country’s track record.

So suggests the COVID-19 Social Change Survey, a daily, nationally representative survey about the pandemic run by Northwestern University social scientists since mid-March. Some survey questions asked whether the United States is better, worse or about the same as other nations across about a dozen topics (economy, health care, criminal justice system, military, education, etc.).

On nearly every metric, the share of Americans rating the United States as “better” than other countries has declined since the pandemic began.

Other questions, from this survey and longer-term polling by Gallup, show declines in broader measures of national pride and confidence in U.S. institutions.

Normally, of course, reduced patriotism or institutional trust would not be positive developments. These declines can be constructive only if they spur the public — and elected officials — to create conditions that would inspire more patriotism and trust.

Maybe a more realistic assessment of our flaws — a crack in the national narcissism — will motivate change, at least if politicians ever catch up with their constituents.