What Will Happen When Red States Need Help with Covid-19? 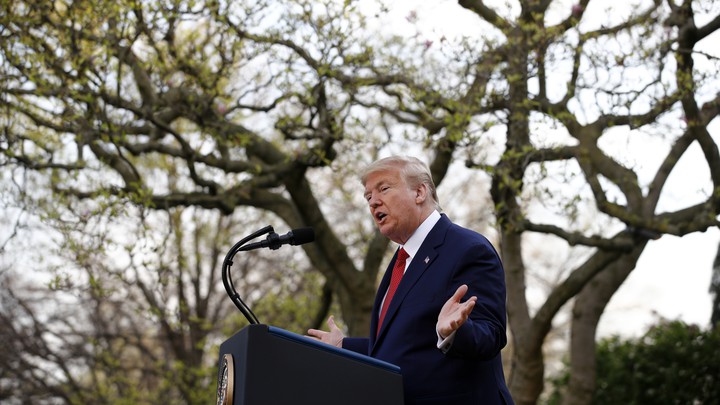 By many accounts Donald Trump has played political favoritism in doling out coronavirus aid and has bad mouthed governors of blue states yet at some point the virus crisis is going to engulf red states - many of which have been slow to enact stay home orders and other measures to slow the spread of the virus. Some red states still have not taken such measures.  While Trump hasn't paid a price as yet since blue states won't vote for him anyway, the equation could rapidly change as red states find themselves slipping into crisis mode.  Suddenly, Trump's failed leadership and ego driven reaction to the crisis could have serious political consequences.  A piece in The Atlantic looks at what may transpire in the near term.  Here are excerpts:

On Sunday morning, President Donald Trump got on the phone with Mayor Bill de Blasio to discuss what New York City needs to survive a white-hot outbreak that is only getting worse. De Blasio asked him to send more ventilators and military personnel, warning that in a week’s time, the health-care system could be overwhelmed.

Until recently, de Blasio told me, none of his calls to the upper reaches of the White House were returned. Two weeks ago, the Democratic mayor said publicly that Trump was “betraying” his native city by not sending more life-saving medical equipment. Ever sensitive to criticism, Trump said, in turn: “I’m not dealing with him.”

Defeating a pandemic is hard enough, but Trump has introduced another layer of complexity: He has personalized the battlefield. He calls COVID-19 “the invisible enemy,” but he also seems fixated on the visible variety—all Democratic leaders, who in his view have been insufficiently grateful for the federal government’s response.

But Democrats can be useful foils for only so long—the virus is already moving beyond blue-state hot spots into the rural red states that are the pillars of Trump’s support. As more people become infected in broader swaths of the country, Trump will face a fresh wave of calls for ventilators, masks, and money. It won’t be so easy to demonize a handful of discontented governors and mayors. Complaints will be coming from friends.Trump has called Washington Governor Jay Inslee a “snake” and said he won’t speak to him. Inslee’s team sounds utterly baffled about what to do. “We’re trying to act as if we’re interacting with a normal president, or at least a normal Republican president,” an aide in Inslee’s administration told me.

“The administration’s response in general has been an abysmal failure, and he compounds that failure by regularly attacking the governors to whom he has passed the buck,” Senator Chris Murphy, a Connecticut Democrat, told me. “I just don’t think we can allow ourselves to normalize a president who is politically attacking the very governors who are trying to save lives right now in the absence of real federal leadership.”

Inside the White House, there seems to be little sympathy for some of the Democratic governors who have complained the loudest. . . . . Trump, though, is sensitive to anything he sees as ingratitude. If his administration sends planeloads of ventilators—a national resource—he wants a thank you, not a complaint about why it didn’t come sooner.

“It’s unprecedented that a president in the middle of something like this would ask you to bow down and kiss his you-know-what in order to get things that every citizen in the United States should get right now,” Jim Ananich, the Democratic leader of the Michigan state Senate, told me.

The virus’s spread will create political pressures Trump has so far escaped. At first the disease took root in densely packed blue states where many residents travel internationally and to which tourists flock. Trump seized on that fact, pointing to red states that have had comparatively few infections.

Conservative pundits have amplified Trump’s message. “These spreads are mainly in the blue states,” the author Dinesh D’Souza said in a recent Fox News appearance. “What I find kind of interesting is these blue-state governors and mayors, they’re criticizing Trump, but they also have the outstretched hand.”

Over time, though, Trump may find even some of his closest political allies demanding more help from the White House. Republicans’ traditional aversion to government intervention and economic aid will face a severe test as more and more of their constituents fall ill. Health experts expect infections to appear more widely as people living in red America travel out of state and then return home, and as people in stricken areas venture out.

“New York is the hardest-hit state right now only because New York has been doing more testing per capita pretty much than anyone else, and New York has a much higher population density, which is what we would expect,” Michael LeVasseur, an epidemiology and biostatistics professor at Drexel University, told me.

Before long, Republicans may be the ones with the outstretched hands. How Trump responds will prove revealing. Will he see pleas for help as more legitimate when they’re coming from red states rather than blue?