The Issue of Race Continues to Haunt American Politics 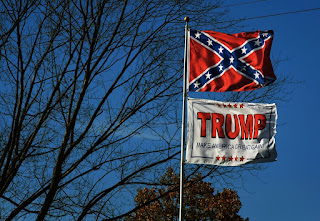 Donald Trump uses perhaps the most openly racist calls to racial bigotry seen since the days of the segregationists in the late 1950's and 1960's.  He has been aided in his racist propaganda by white supremacists and white evangelical Christians - a group that hates everyone other than themselves - lead by charlatans and scamvangelists who have used racial resentment and manufactured dangers to gain political power for themselves and, just as importantly, to line their own pockets with money.  The question for Democrats and truly moral people is how to counter hate and racism and persuade a large segment of voters that racism and Trump's divide and conquer agenda does not truly further their interests or well-being.  A lengthy column in the New York Times looks at this difficult issue and the difficulty in finding a counter argument that will convince the "presuadables" that toxic racism is bad for America.  Here are highlights:


Stung by the success of Trump’s anti-immigrant, racist campaign themes in 2016, left-of-center advocacy groups — think tanks, unions, progressive academics and Democratic consultants — are developing tools this year to counter the continuing Republican assault on liberal values, based on the optimistic assumption that the reservoir of white animosity is not so deep that Trump is assured re-election.

These efforts on the left challenge the long history of Republican success in exploiting race . . . . That history points to the relentless power of racial resentment in American politics. Despite polling that shows greater acceptance of racial equality, this issue is as potent a source of political strength for Trump today as it was for Nixon a half century ago.

There are myriad studies, as I have noted (along with many others) that show the continuing effectiveness of race and immigration as wedge issues. These studies continue to appear at an alarming rate.

We find that exposure to racially inflammatory statements by Trump caused those with high levels of prejudice to be more likely to perceive engagement in prejudiced behavior as socially acceptable.

In other words, if the president of the United States denigrates Muslims, or Hispanics, or African-Americans, then anyone can.

A forthcoming paper by Desmond King and Rogers M. Smith, political scientists at Oxford and the University of Pennsylvania, “White Protectionism in America,” makes a strong case that Trump, unlike his Republican predecessors in the White House, has gone far beyond rhetoric and token gestures to substantively address the concerns of his anti-immigrant and socially conservative supporters.

Now let’s look at some of the Democratic and liberal thinking focused on undermining Trump’s divide-and-conquer strategy.

The authors, Simon Greer, founder of Cambridge Health Ventures, and Richard D. Kahlenberg, a senior fellow at the foundation, note that

Working-class Americans do not want to be lectured about what their motivations are, and ascribing misogyny or racial animus to any group of potential voters is not a winning strategy for building a coalition.

One of the authors’ central arguments is that liberals have ceded to conservatives a monopoly on such themes and values as faith, family, country and law and order. They have done so because Republicans have “added a meanspirited twist to these mainstream values” as a way of attacking women’s and gay rights, blacks, antiwar protesters and single mothers.

[A] paper that was published last year, that voters are less concerned with candidates’ specific policies than with the values they espouse:

We found that a presidential candidate who framed his progressive economic platform to be consistent with more conservative value concerns like patriotism, family, and respect for tradition — as opposed to more liberal value concerns like equality and social justice — was supported significantly more by conservatives and, unexpectedly, by moderates as well.

The Race-Class project . . . . . according to the report, these middle ground voters “have concerns about ‘reverse racism’ and discrimination against whites;” a sizable majority agree “focusing on race doesn’t fix anything and may even make things worse;” and “persuadable adults believe that people of color who cannot get ahead are mostly responsible for their own condition.”

In other words, these persuadable voters provide fertile ground for conservative appeals to racial resentment.

The most effective liberal-Democratic message read:

America’s strength comes from our ability to work together — to knit together a landscape of people from different places and of different races into one nation. For this to be a place of freedom for all, we cannot let the greedy few and the politicians they pay for turn what you look like, where you come from or how much money you have into reasons some of us matter and others don’t. It’s time to stand up for each other and come together. It is time for us to pick leaders who reflect the very best of every kind of American. Together, we can make this a place where freedom is for everyone, no exceptions.

For the Democratic Party, race and immigration remain crucially important in terms of both values and policy. The key question is whether the party is structurally capable — under an extraordinary barrage of hostility directed by Republicans at African-Americans and immigrants — of finding politically effective ways of addressing race and immigration. Has the left wing of the party become so discouraged, so defensive — and so embattled — that it now perceives a critical mass of whites as intractably hardened and unswervingly opposed to minority interests? If moderates and progressives are locked in on either side of such a chasm, what will it take to make peace?

Sadly, Bernie Sanders' "my way or the highway" message does not telegraph the most effective liberal messaging. In a different manner, he is almost as divisive as Trump.
Posted by Michael-in-Norfolk at Wednesday, February 26, 2020