Sanders Reaffirmed His Admiration for the Castro Regime’s Social Policies 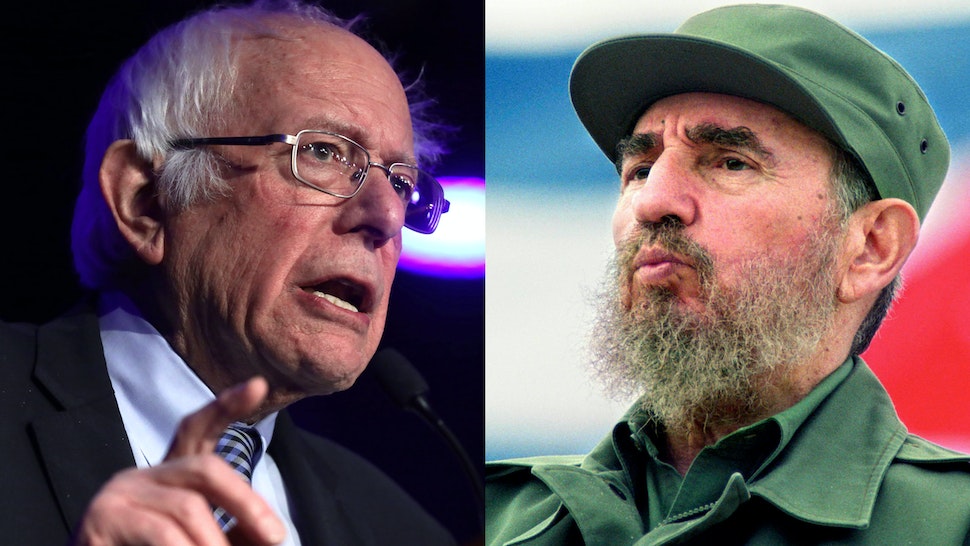 Bernie Sanders remains unrepentant for his praise of brutal totalitarian regimes, especially that of Fidel Castro.  Given Sanders' "my way or the highway" mindset, one cannot help but wonder if Sanders doesn't admire forcing change even when the populace doesn't want, particularly if it promotes his left wing ideology.  A piece in the Miami Herald from 2016 looks at the number of Cubans murdered by Castro's brutal regime:

The late and widely respected University of Hawaii historian R. J. Rummel, who made a career out of studying what he termed “democide,” the killing of people by their own government, reported in 1987 that credible estimates of the Castro regime’s death toll ran from 35,000 to 141,000, with a median of 73,000.


This is the regime Sanders has lauded. A column in the Washington Post looks at the myth that Castro's regime greatly reduce illiteracy.  Tell the families of those murdered or forced into exile that a meager increase in literacy was worth the blood bath.  If Sanders is so wrong about the Castro regime - and the Soviet and Sandinista regimes - what else is he wrong about? Democrats are insane if they give Sanders their party nomination.  The only one who benefits is Donald Trump and his horrible regime.  Here are Post column excerpts:

Unfazed by the howls of indignation — honest or feigned — over his recent praise of communist Cuba, Sen. Bernie Sanders (I-Vt.) has reaffirmed his admiration for the Castro regime’s social policies over the past few days. He has done so while simultaneously insisting that he’s “very opposed to the authoritarian nature of Cuba.”

But can the achievements of any monstrous regime ever be praised? Is it really possible to separate the cruelty of any dictatorship from any of its policies? In the case of communist Cuba, a further question arises: Is it possible to believe any of the claims it makes for its own achievements, given that it generates its own statistics and promotes its own version of history?

And anyone who would care to do some fact-checking, as did The Post’s Glenn Kessler a few years ago, will quickly discover that the Sanders version of Cuban history is far from accurate.

First, consider the issue of literacy in Cuba before Castro came along. Was pre-Castro Cuba a nation of illiterates, and Castro’s literacy campaign as great an accomplishment as Sanders avers? Not at all. A Cuban census from 1953 found that 77.9 percent of the island’s total population was already literate, and that in urban areas the literacy rate was 88.9 percent: among the highest in Latin America and higher than in some benighted rural counties in the United States. Seven years later, in 1960, according to data compiled at Oxford University, the literacy rate for the entire island was 79 percent.

So the scope of Castro’s 1961 literacy campaign, much admired by Sanders, is more myth than reality. Moreover, the image of pre-Castro Cuba as a primitive society rescued from poverty and illiteracy by a so-called revolution is a deceitful caricature, one brilliantly conceived by the Castro regime to make its brutality seem less offensive — merely “authoritarian” rather than monstrous.

Second, consider the real purpose of Cuba’s literacy campaign. Can it be totally disassociated from the repression that accompanied it, as Sanders would like you to think? Far from it. At the very same time that it was teaching illiterate Cubans to read, the Castro regime was busy stifling all freedom of expression. It banned any books that displeased it, shut down all newspapers and magazines, and flooded schools with texts that were pure propaganda. It turned each and every school on the island into an indoctrination camp in which no deviation from Marxist orthodoxy was ever allowed.

In other words, the literacy campaign was designed to enhance a totalitarian state’s control of its people. The fact that it lent a falsely benevolent sheen to Castro was an added bonus, but there is no denying that the Maximum Leader taught Cubans to read so that their thinking could be more carefully controlled by his propaganda machine.

Try to imagine Sanders or any other leftist ever insisting that it is “unfair” to deny the Third Reich praise for some of its accomplishments, such as the building of the Autobahn.

The “good” things Sanders finds in communist Cuba should seem immensely disturbing to Americans, even frightening. His vehemence in defending these “good” things, which in truth are hollow victories stained with blood, should also set off alarms, for this peculiar obsession reveals more than some character flaw.

Sanders’s insistence on finding positive things to say about Fidel Castro might be the clearest indication he has yet given American voters of his own sources of inspiration, and of his vision for the future of the United States.