The Trump Regime's Disturbing Response to the Coronavirus 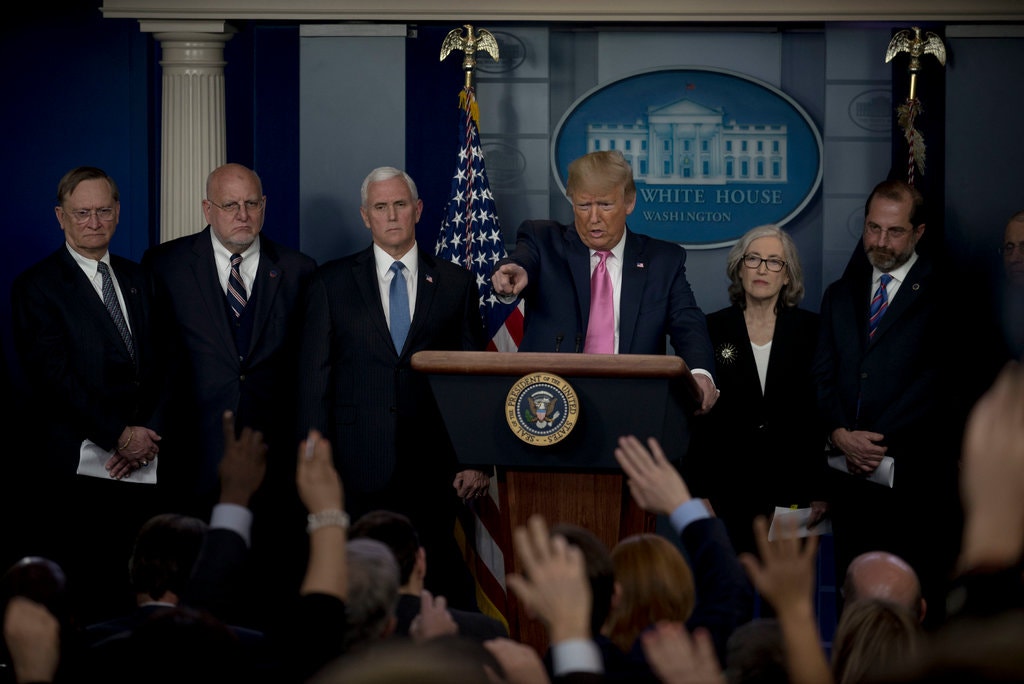 So far America seems to have dodge a bullet when it comes to the coronavirus.  That said, there is absolutely no assurance that this will continue and, if it does not, the Trump/Pence regime's response is frightening, especially since science denying Mike Pence has been put in charge of the regime's response and has censorship power over legitimate experts.  Just as disturbing, the regime has indicated that whether one can receive needed treatment if the virus spreads will depend upon one's ability to pay since big Pharma cannot be denied the ability to make huge profits.  A piece in the New York Times looks at the disturbing prospects facing America.  Here are highlights:

So, here’s the response of the Trump team and its allies to the coronavirus, at least so far: It’s actually good for America. Also, it’s a hoax perpetrated by the news media and the Democrats. Besides, it’s no big deal, and people should buy stocks. Anyway, we’ll get it all under control under the leadership of a man who doesn’t believe in science.

From the day Donald Trump was elected, some of us worried how his administration would deal with a crisis not of its own making. Remarkably, we’ve gone three years without finding out: Until now, every serious problem facing the Trump administration, from trade wars to confrontation with Iran, has been self-created. But the coronavirus is looking as if it might be the test we’ve been fearing.

The story of the Trump pandemic response actually began several years ago. Almost as soon as he took office, Trump began cutting funding for the Centers for Disease Control and Prevention, leading in turn to an 80 percent cut in the resources the agency devotes to global disease outbreaks. Trump also shut down the entire global-health-security unit of the National Security Council.

Experts warned that these moves were exposing America to severe risks. “We’ll leave the field open to microbes,” declared Tom Frieden, a much-admired former head of the C.D.C., more than two years ago. But the Trump administration has a preconceived notion about where national security threats come from — basically, scary brown people — and is hostile to science in general. So we entered the current crisis in an already weakened condition.

The first reaction of the Trumpers was to see the coronavirus as a Chinese problem — and to see whatever is bad for China as being good for us. Wilbur Ross, the commerce secretary, cheered it on as a development that would “accelerate the return of jobs to North America.”

The story changed once it became clear that the virus was spreading well beyond China. At that point it became a hoax perpetrated by the news media. Rush Limbaugh weighed in: “It looks like the coronavirus is being weaponized as yet another element to bring down Donald Trump.

And in case you’re wondering, no, the coronavirus isn’t like the common cold. In fact, early indications are that the virus may be as lethal as the 1918 Spanish Flu, which killed as many as 50 million people.
Financial markets evidently don’t agree that the virus is a hoax; by Thursday afternoon the Dow was off more than 3,000 points since last week. Falling markets appear to worry the administration more than the prospect of, you know, people dying.
At that point the administration appears to have finally realized that it might need to do something beyond insisting that things were great. But according to The Washington Post’s Greg Sargent and Paul Waldman, it initially proposed paying for a virus response by cutting aid to the poor — specifically, low-income heating subsidies. Cruelty in all things.

On Wednesday Trump held a news conference on the virus, much of it devoted to incoherent jabs at Democrats and the media. He did, however, announce the leader of the government response to the threat. Instead of putting a health care professional in charge, however, he handed the job to Vice President Mike Pence, who has an interesting relationship with both health policy and science.

Early in his political career, Pence staked out a distinctive position on public health, declaring that smoking doesn’t kill people. He has also repeatedly insisted that evolution is just a theory. As governor of Indiana, he blocked a needle exchange program that could have prevented a significant H.I.V. outbreak, calling for prayer instead.

And now, according to The Times, government scientists will need to get Pence’s approval before making public statements about the coronavirus.

If the facts don’t make Trump look good, he and his allies attack the messengers, blaming the news media and the Democrats — while trying to prevent scientists from keeping us informed. And in choosing people to deal with a real crisis, Trump prizes loyalty rather than competence.

Maybe Trump — and America — will be lucky, and this won’t be as bad as it might be. But anyone feeling confident right now isn’t paying attention.

Posted by Michael-in-Norfolk at Friday, February 28, 2020

It's a kakistocracy.
It's par course.
It's going to be excused by his cult.
What's new?