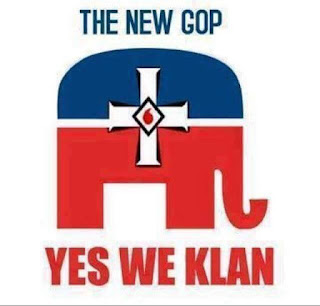 Over the last two decades, Republicans have increasingly resorted to dirty tricks ranging from voter ID laws to disenfranchise voters unlikely to support them to drawing computer gerrymandered districts to make it more difficult for Democrat candidates win - something Virginia certainly witnessed until the federal courts intervened.  Why resort to such tactics?  The answer is easy.  Increasingly, the majority of Americans reject what the GOP is peddling and, without cheating, Republicans fear they are destined to become a permanent minority party.  There simply are not enough racist and religiously extreme voters to assure the GOP's survival.  Thus, the efforts to thwart democracy and limit who can vote.  The only thing the GOP will not do is reject its toxic policies and evolve with the times and the changing demographics of the nation.  A column in the New York Times looks at the phenomenon.  Here are highlights:

The greatest threat to our democracy today is a Republican Party that plays dirty to win.

The party’s abandonment of fair play was showcased spectacularly in 2016, when the United States Senate refused to allow President Barack Obama to fill the Supreme Court vacancy created by Justice Antonin Scalia’s death in February. While technically constitutional, the act — in effect, stealing a court seat — hadn’t been tried since the 19th century. It would be bad enough on its own, but the Merrick Garland affair is part of a broader pattern.

Republicans across the country seem to have embraced an “any means necessary” strategy to preserve their power. After losing the governorship in North Carolina in 2016 and Wisconsin in 2018, Republicans used lame-duck legislative sessions to push through a flurry of bills stripping power from incoming Democratic governors. Last year, when the Pennsylvania Supreme Court struck down a Republican gerrymandering initiative, conservative legislators attempted to impeach the justices.

Constitutional hardball has accelerated under the Trump administration. President Trump’s declaration of a “national emergency” to divert public money toward a border wall — openly flouting Congress, which voted against building a wall — is a clear example. And the Supreme Court’s conservative majority, manufactured by an earlier act of hardball, may uphold the constitutionality of [Trump's] the president’s autocratic behavior.

Constitutional hardball can damage and even destroy a democracy. Democratic institutions function only when power is exercised with restraint. When parties abandon the spirit of the law and seek to win by any means necessary, politics often descends into institutional warfare.

As the collapse of democracy in Germany and Spain in the 1930s and Chile in the 1970s makes clear, these escalating conflicts can end in tragedy.Why is the Republican Party playing dirty? Republican leaders are not driven by an intrinsic or ideological contempt for democracy. They are driven by fear.

Democracy requires that parties know how to lose. Politicians who fail to win elections must be willing to accept defeat, go home, and get ready to play again the next day. This norm of gracious losing is essential to a healthy democracy.

But for parties to accept losing, two conditions must hold. First, they must feel secure that losing today will not bring ruinous consequences; and second, they must believe they have a reasonable chance of winning again in the future. When party leaders fear that they cannot win future elections, or that defeat poses an existential threat to themselves or their constituents, the stakes rise. . . . In short, desperation leads politicians to play dirty.

Take German conservatives before World War I. They were haunted by the prospect of extending equal voting rights to the working class. They viewed equal (male) suffrage as a menace not only to their own electoral prospects but also to the survival of the aristocratic order. . . . . So German conservatives played dirty, engaging in rampant election manipulation and outright repression in the late 19th and early 20th centuries.

In the United States, Southern Democrats reacted in a similar manner to the Reconstruction-era enfranchisement of African-Americans. Mandated by the 15th Amendment, which was ratified in 1870, black suffrage not only imperiled Southern Democrats’ political dominance but also challenged longstanding patterns of white supremacy. Since African-Americans represented a majority or near majority in many of the post-Confederate states, Southern Democrats viewed their enfranchisement as an existential threat. So they, too, played dirty.

Between 1885 and 1908, all 11 post-Confederate states passed laws establishing poll taxes, literacy tests, property and residency requirements and other measures aimed at stripping African-Americans of their voting rights . . . . These measures, building on a monstrous campaign of anti-black violence, did precisely what they were intended to do: Black turnout in the South fell to 2 percent in 1912 from 61 percent in 1880. Unwilling to lose, Southern Democrats stripped the right to vote from millions of people, ushering in nearly a century of authoritarian rule in the South.

Republicans appear to be in the grip of a similar panic today. Their medium-term electoral prospects are dim. For one, they remain an overwhelmingly white Christian party in an increasingly diverse society.

Republicans also face a generational challenge: Younger voters are deserting them. In 2018, 18- to 29-year-olds voted for Democrats by more than 2 to 1, and 30-somethings voted nearly 60 percent for Democrats.

Demography is not destiny, but as California Republicans have discovered, it often punishes parties that fail to adapt to changing societies. The growing diversity of the American electorate is making it harder for the Republican Party to win national majorities. Republicans have won the popular vote in presidential elections just once in the last 30 years.

The problem runs deeper than electoral math, however. Much of the Republican base views defeat as catastrophic. White Christians are losing more than an electoral majority; their once-dominant status in American society is eroding. . . . . Many rank-and-file Republicans believe that the country they grew up in is being taken away from them. Slogans like “take our country back” and “make America great again” reflect this sense of peril.

So like the old Southern Democrats, modern-day Republicans have responded to darkening electoral horizons and rank-and-file perceptions of existential threat with a win-at-any-cost mentality. Most reminiscent of the Jim Crow South are Republican efforts to tilt the electoral playing field. Since 2010, a dozen Republican-led states have adopted new laws making it more difficult to register or vote. Republican state and local governments have closed polling places in predominantly African-American neighborhoods, purged voter rolls and created new obstacles to registration and voting.

Although these abuses are certainly less egregious than those committed by post-bellum Southern Democrats, the underlying logic is similar: Parties representing fearful, declining majorities turn, in desperation, to minority rule.

The only way out of this situation is for the Republican Party to become more diverse. A stunning 90 percent of House Republicans are white men, even though white men are a third of the electorate. Only when Republicans can compete seriously for younger, urban and nonwhite voters will their fear of losing — and of a multiracial America — subside.

American democracy faces a Catch-22: Republicans won’t abandon their white identity bunker strategy until they lose, but at the same time that strategy has made them so averse to losing they are willing to bend the rules to avoid this fate. There is no easy exit.

Republican leaders must either stand up to their base and broaden their appeal or they must suffer an electoral thrashing so severe that they are compelled to do so. . . . Until Republicans learn to compete fairly in a diverse society, our democratic institutions will be imperiled.

Posted by Michael-in-Norfolk at Sunday, September 22, 2019