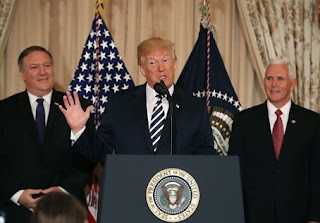 Over the last two and a half years it has been amazing to see how willing so many Republicans with one time decent - if not stellar - reputations have been willing to prostitute themselves to Donald Trump and set the stage for history to remember them in a light similar to that of Nixon's Watergate co-conspirators and sycophants. A few in the GOP have refused to destroy their reputations and throw honor and the truth to the wind, but they have been the exception rather than the norm.  Now, some of those willing to make cheap whores look virtuous in their effort to give Trump political fellatio may rue the day they sold their souls for the political equivalent of pieces of silver, both due to the legal expense they will incur and because at the end of the day, their reputations may be destroyed for all time.  Leading this group are Rudi Giuliani and William Barr, each of whom has chose to act akin to Mafia consiglieres rather than defenders of the law.  A piece in Politico looks at the coming storm approaching these shameless Trump sycophants.  Here are highlights:

Trump has done it again: He’s dragged some of his closest aides and advisers into a scandal packed with potentially devastating personal consequences. That’s good news for white-collar lawyers who charge by the hour.

But an investigation into allegations that Trump pressured his Ukrainian counterpart to investigate Joe Biden is hardly the kind of thing to be embraced by the wider world around Trump, a growing list that includes Vice President Mike Pence; some of his most important Cabinet officials such as secretary of state Mike Pompeo, attorney general Bill Barr and acting chief of staff Mick Mulvaney; and his own personal attorney at the center of it all, Rudy Giuliani.

They all face a long road ahead with the prospect of hefty legal bills, reputational scars and damaged political prospects hanging over them for years.

Watergate, of course, popularized “All the President’s Men” for the sheer breadth of people swept up in President Richard Nixon’s ultimate downfall.

“While it’s not quite Watergate, which is where Nixon got drawn into it by his senior staff, this is a situation where I think even more offensively [Trump] the president seems to have embroiled his close confidants in his own mischief,” said Philip LaCovara, a former top prosecutor on the special counsel team that examined Nixon’s conduct.

For starters, all of the people in the president’s world with ties to the Ukraine scandal can expect to get hauled up for congressional hearings — where the questioning in a Democratic-led impeachment investigation is sure to be anything but friendly.

Here’s a look at some of the key players surrounding the president who will be among the first to face a punishing spotlight as the impeachment inquiry ensnares Trumpworld.

Mike PenceFew are more important in Trump’s orbit on foreign policy than the the vice president. Pence is Trump’s right hand man when dealing with fellow world leaders. He’s often piped in for phone calls. And the two strategize about it all at their weekly lunches.

It’s with that pedigree that the president dispatched Pence earlier this month to cover for him in Poland on a trip that included a face-to-face meeting with Ukraine President Volodymyr Zelensky. In response to a direct question from a reporter whether they’d discussed Joe Biden, Pence acknowledged that the conversation covered U.S. financial support for the eastern Europe country and “corruption.”

During a Wednesday press conference where the threat of impeachment loomed, [Trump] the president pretty much tossed his No. 2 directly to the wolves. “I think you should ask for Vice President Pence's conversations, because he had a couple conversations also,” Trump said.

Bill BarrThe attorney general has seen his reputation savaged since joining the Trump administration at the start of 2019. He ran afoul of his longtime friend Robert Mueller over how he handled the end of the special counsel’s Russia probe. In July, his defiance alongside Commerce Secretary Wilbur Ross of congressional subpoenas prompted a House vote to hold them in criminal contempt — the second time in U.S. history that’s happened to a sitting Cabinet member.

Now there’s the Ukraine mess. . . . . A DOJ spokeswoman said Trump never directly asked Barr to begin a Biden probe, though that hardly quelled the concerns from Democrats. House Judiciary Chairman Jerry Nadler said Barr needs to recuse himself from the issue. Rep. Joaquin Castro, a Texas Democrat on the Intelligence Committee, called the attorney general a “witness that will be called to testify” in the impeachment investigation.

Mike PompeoPompeo has been careful to always eliminate any perception of daylight with the president. . . . Some of his larger trouble could come via the president’s personal lawyer, Giuliani, who says he was tasked by the State Department to engage with Ukrainian officials. It’s not clear what role Pompeo played in it all, though he has been a willing defender of the president on television. House Democrats are likely to seek clarity about his involvement in the coming months.

Mick MulvaneyThe president’s acting chief of staff has spared himself from the ever-present Trump axe in part by letting Trump be Trump. That could become a problem now.

Rudy GiulianiWhere to even begin? The former New York mayor has relished his role on the Trump personal legal team, where he has served as an attack dog tarring the president’s investigators and a point man to go on friendly cable TV shows to uncork bad news in the best light possible. With the Ukraine-Biden matter, Giuliani has celebrated how he’s managed to get global press attention on a story that he hopes will undercut the current 2020 Democratic front-runner.

But Giuliani in the process has also made himself a potential witness, or more, over his months-long campaign — both behind the scenes and very much in the public eye — to get Ukrainian officials to commit to a Biden investigation. Trump in the phone call with Zelensky made it clear his lawyer was acting as his emissary on the issue. . . . . seven Democratic senators on Wednesday re-upped their own call — they first did it a year ago — to have the Justice Department’s National Security Division investigate whether Giuliani is in compliance with foreign lobbying laws.

All deserve a ruinous scrutiny and perhaps criminal charges of their own before all of this ends. I do not wish them even a shred of good luck in the coming days and weeks.
Posted by Michael-in-Norfolk at Thursday, September 26, 2019