Trump Is Forcing the House Towards Impeachment 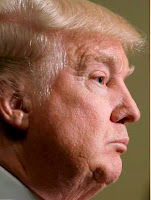 Anyone who has followed Donald Trump's real estate career should have known the man is utterly unprincipled and has long viewed himself above the law.  He has long operated more in the mode of a Mafia Don than a normal businessman or entrepreneur. Placing him in the Oval Office was a disaster waiting to happen, and given his malignant narcissism and view of himself as unbound by the law or tradition, t has always been only of question of time until he crossed the line of legal presidential conduct. The man embodies why the Founding Fathers designed the Electoral College system - a system electors failed to honor so as to protect the nation from someone like Trump who seemingly views himself as George III or some other despotic monarch (which explains his love of brutal dictators).  A piece in New York Magazine lays out why Trump is pushing the House of Representatives to begin impeachment.  Increasingly, members of Congress who take their oath of office have no other option than to move to impeach an unfit and dangerous occupant of the White House.  Ultimately, the question for Republicans will be whether they place party over country and value avoiding a primary challenge over their constitution obligations.  Here are article excerpts:

The anticlimactic denouement of the Mueller report produced a mixture of relief and gloating for Republicans. For President Trump it also produced something else: An almost intoxicating sense of impunity, a realization that his attempts to cultivate Russia as an ally, and largely successful efforts to gain control of the Justice Department, gave him carte blanche to plan his next crime. In June, he announced on television that he would accept dirt on his opponent from a foreign government if offered it again. He dispatched his lawyer to Ukraine to deliver the message that he demanded an investigation of his leading Democratic rival, and that he would use the powers of his office to leverage this end.

It is primarily because Trump is indicating his war on democratic norms will not end that Congress is barreling toward impeachment right now at astonishing speed. On Monday morning, the headline on Politico’s story on House Democrats began, “Reluctant Democrats Weigh Impeachment.” By evening, as more reporting poured in, it had changed to “Dems Moving to Condemn Trump as Impeachment Fever Grows.”

The most important impediment to impeaching Trump has always been the reluctance of the most vulnerable House Democrats to take a vote that they feared would alienate their constituents. But all the signs are now pointing toward those Democrats throwing aside their reluctance. Seven newly-elected freshmen Democrats from vulnerable districts have published an op-ed in the Washington Post demanding Trump hand over the suppressed complaint from an intelligence whistleblower of Trump’s pressure on Ukraine. “If these allegations are true,” they write, “we believe these actions represent an impeachable offense.”

House Speaker Nancy Pelosi has urged restraint out of a desire to insulate those vulnerable members, who she needs to preserve her majority. Pelosi’s behavior, too, has shifted notably. Her close ally, Rosa DeLauro, issued a statement demanding the entire whistleblower’s complaint and opening the door to impeachment. The Post reports Pelosi is sounding out members on impeachment, and “many leadership aides who once thought Trump’s impeachment was unlikely now say they think it’s almost inevitable.”

It is possible Trump could defuse impeachment by releasing his block on the whistleblower complaint. But surrendering his claims of secrecy and almost unbounded executive privilege run counter to his instinct for domination. It could also quite likely supply evidence incriminating enough to lead to his impeachment anyway.

The politics of this maneuver are highly uncertain. Whatever their motive, Democrats are not seeking political advantage, and there is a distinct possibility proceedings would backfire on them. Despite Trump’s unpopularity, strong majorities have opposed impeachment throughout his term.

But there is at least some reason to believe the politics of the Ukraine scandal will play out differently than the politics of the Russia scandal. The Republican phalanx of support has failed to materialize in its usual strength. Normally passive Mitt Romney issued a surprisingly sharp rebuke, demanding Trump “should make available the whistleblower complaint that has been deemed to be credible and urgent, and that if not “it will be up to the House to decide how to proceed.”

Other signs of discomfort in the party are more subtle. The normal mouthpieces of the Party line, while tonally in support, are refusing to outright defend his actions in Ukraine. . . . The Wall Street Journal editorial page scolds, “What we know of the call underscores Mr. Trump’s greatest flaw as President, which is his political narcissism. Every decision boils down to how it affects him or his re-election prospects. Other Presidents have made similar calculations, but Mr. Trump lacks the basic filter to know when he is crossing a line that creates trouble for himself or the country.”

Even more tellingly, Senate Majority Leader Mitch McConnell declined to defend Trump’s coercion of Ukraine, or even to repeat his attacks on Biden, but instead made a tepid complaint that Democrats “have chosen to politicize the issue.” It is probably relevant that Trump was defying the wishes of Republicans themselves by refusing to allow the military aid to Ukraine that Congress had passed to go through. Trump personally ordered the aid to be held up, the Washington Post reports, in the latest explosive development. McConnell may or may not care that Trump is abusing his power to smear Biden, but he surely cares that Trump is abrogating laws passed by McConnell.

The House will probably vote soon to make clear its intention to impeach Trump unless he hands over the full whistleblower complaint. Perhaps he will do so, and perhaps it will not incriminate him. What seems more likely now is a prospect that had appeared remote just days ago: The House of Representatives will hold impeachment proceedings for President Donald Trump.

Posted by Michael-in-Norfolk at Tuesday, September 24, 2019