Trump's Grip on the GOP is Causing Republicans to Flee 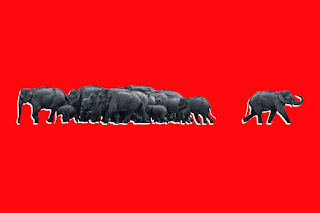 The Republican Party began its descent into becoming a moral cesspool long before Donald Trump declared he would run for office in 2015. It began with the slow infiltration of the party by Christofascists - perhaps the most racist and morally bankrupt group I've ever encountered - near the end of my time in the GOP and accelerated as white supremacists (often one and the same as the Christofascists) were also made welcome in the party.  Trump merely was the culmination of a moral rot - a cancer, if you will - that had been spreading and metastasizing for years.  Now, the cancer in the form of Trump and his base of support has a complete grip on the GOP.  The result is that, if one has a shred of morality and decency, it is becoming difficult or impossible to remain a Republican.  Those who have remained to date by deluding themselves that the GO still stands for limited government, fiscal and personal responsibility, and personal freedom (something that, in reality is questionable).  Now, the GOP is all Trump, racism, white supremacy and misogyny 27/7.  As a result, record numbers of the Congressional Republicans in the House are heading for the door.  A piece in the Washington Post looks at the growing exodus.  Hopefully, Republican "friends" will begin similar soul searching. Here are highlights:

Moments after Trump’s July 14 missive telling four U.S. congresswomen of color to “go back” to their countries of origin, the congressman from Michigan phoned a fellow House GOP leader and asked him to get Trump to stop. “It’s the wrong thing for a leader to say,” he told the leader, whom he declined to name. “It’s politically damaging to the party, to the country.”

Three days later, Mitchell was awaiting a prime-time CNN appearance when he saw footage of Trump rallygoers chanting “send her back,” aimed at one of the congresswomen, Rep. Ilhan Omar (D-Minn.). Stunned, Mitchell said he scribbled question marks on a notepad to silently ask an aide: “How do I even respond to this on TV?”

But one of the final straws was the unwillingness of people in Trump’s orbit to listen. Mitchell implored Vice President Pence, his chief of staff, Marc Short, and “any human being that has any influence in the White House” to arrange a one-on-one conversation between him and the president so he could express his concerns.

It never happened. And 10 days after the Trump tweet, Mitchell — a two-term lawmaker who thought he’d be in Congress for years to come — announced his retirement.
“We’re here for a purpose — and it’s not this petty, childish b------t,” Mitchell, 62, said in an interview in early September. Pence’s office declined to comment.

Mitchell is among a growing list of House Republicans — 18 to date — who have announced plans to resign, retire or run for another office, part of a snowballing exodus that many Republicans fear is imperiling their chances of regaining control of the House in the 2020 elections.

And the problem for the GOP is bigger than retirements. Since Trump’s inauguration, a Washington Post analysis shows, nearly 40 percent of the 241 Republicans who were in office in January 2017 are gone or leaving because of election losses, retirements including former House speaker Paul D. Ryan (Wis.), and some, such as Mitchell, who are simply quitting in disgust.

The vast turnover is a reminder of just how much Trump has remade the GOP — and of the purge of those who dare to oppose him. Former congressman Mark Sanford (R-S.C.) lost his June 2018 primary after challenging Trump; he’s now a Republican presidential candidate. Rep. Justin Amash (I-Mich.), the only Republican to accuse Trump of impeachable acts, quit the GOP in July citing the “partisan death spiral.” His political future is uncertain.The retirement numbers are particularly staggering. All told, 41 House Republicans have left national politics or announced they won’t seek reelection in the nearly three years since Trump took office. That dwarfs the 25 Democrats who retired in the first four years of former president Barack Obama’s tenure — and Republicans privately predict this is only the beginning.

Most of the departing Republicans publicly cite family as the reason for leaving. But behind the scenes, Republicans say the trend highlights a greater pessimism about the direction of the party under Trump — and their ability to win back the House next year.

[Trump] The president has doubled down on an all-base strategy for his reelection campaign, making some Republicans ask whether Trump has put his own political future ahead of the long-term viability of the party . . . . “If the party doesn’t start looking like America, there will not be a party in America,” said Rep. Will Hurd (R-Tex.), the only black House Republican, who announced his retirement in August.

House Republicans knew Trump was going to be a problem in the suburbs well before they lost 29 incumbents and their majority in the 2018 elections. In a private meeting at Camp David in early 2018, then-House Majority Leader Kevin McCarthy (R-Calif.) tried to explain to Trump why the suburbs were key to the GOP keeping the House.

“He has not been a net positive for suburban House Republicans, I mean, that’s a truism,” said former congressman Ryan Costello (Pa.), a moderate Republican who retired in 2018 rather than face a difficult reelection in the Philadelphia suburbs. “Down ballot, for the Republicans, you are basically judged by whatever [Trump] the president does, and not by what you do.”

Even in leadership circles, there’s an admission that Trump isn’t helping the party in the suburbs. No one, however, is willing to say it aloud.

The aide said such knowledge has been driving many of the recent retirements: “I think a lot of members are pretty nervous that Trump doesn’t win reelection. And then we’re in the minority and we have a Democrat in the White House. . . . We’re in the wilderness right now, but if you lose the White House, then that is the extreme wilderness.”

“He’s turned [the GOP] into a personal vessel for his brand,” Curbelo said. “[Trump] The president seems to be doubling down on an all-base strategy; perhaps that can work for him . . . but it certainly makes it very difficult for Republicans to win a majority of seats in the House.”

Hurd, a former CIA official who would have faced a difficult reelection in a Democratic-leaning district, has been increasingly vocal about the direction of the party. He told a Republican LGBTQ group in June that the GOP wasn’t expanding in some places because unnamed people weren’t following “real basic things that we should all learn when we’re in kindergarten”: “Don’t be a racist. Don’t be a misogynist, right? Don’t be a homophobe.”

Hurd said in an interview. “It’s women in the suburbs, minorities and young people — those are going to be the key groups and key voters in 2020.”

Posted by Michael-in-Norfolk at Monday, September 23, 2019