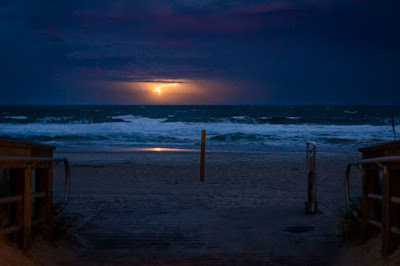 Donald Trump - who has denied the reality of climate change and sought to reduce limits on carbon emissions and to weaken clean water and clean air laws - is now, belatedly, facing a formal impeachment inquiry.  But while this massive political event begins, something that will more directly impact millions of Americans was outlined in a new United Nations Climate Change report. Rising sea levels, increased heat waves, and multiple other adverse impacts are becoming ever more of a reality and coastal cities are looking at annual coastal flooding events in the not too distant future. The report ought to be a clarion call, but one cannot help but fear that all Republicans will be focused on is protecting their toxic and utterly unfit leader - in short, fiddling while Rome burns, if you will.  A piece in the Washington Post looks at the disturbing report.  Here are excerpts:

Climate change is already causing staggering impacts on the oceans and ice-filled regions that encompass 80 percent of the Earth, and future damage from rising seas and melting glaciers is now all but certain, according to a sobering new report from the United Nations.

Given current emissions levels, a number of serious impacts are essentially unavoidable, says the report of the Intergovernmental Panel on Climate Change (IPCC).

Extreme floods that have historically struck some coastal cities and small island nations once every 100 years will become an annual occurrence by 2050, according to the IPCC. In addition, if emissions continue to increase, global sea levels could rise by more than three feet by the end of this century — around 12 percent higher than the group estimated as recently as 2013. . . . “The conclusion is inescapable: The impacts of climate change on the ocean are well underway. Unless we take very serious action very soon, these impacts will get worse — much, much worse.”

More than 100 scientists from around the world contributed to the latest report by the IPCC, which found that profound and potentially devastating consequences lie ahead for marine life, Arctic ecosystems and entire human societies if climate change continues unabated.

The findings also come as world leaders gathered this week at the United Nations for a much-anticipated “climate summit” aimed at injecting new momentum into the flagging effort to persuade countries to do more to move away from fossil fuels and toward cleaner forms of energy. While dozens of smaller nations did unveil plans for coming years, the world’s largest emitters have stopped short of committing to transformational changes.

“The climate emergency is a race we are losing — but it is a race we can win if we change our ways now,” U.N. Secretary General António Guterres told world leaders Tuesday in his latest attempt to spur action.

One of the document’s most striking findings involves the rise in sea level, which is now being driven mainly by the rapid melting of ice in Greenland, Antarctica and the world’s smaller glaciers. Sea level rise is accelerating, and the world could see 3.6 feet in total sea level rise by the year 2100 in a very high-emissions scenario. In 2013, the IPCC had estimated that value at slightly over three feet.

But the truth is that even these estimates may be too small, because when scientists behind the report looked at an alternative method for gauging how much seas could rise — simply canvassing the views of experts — even larger estimates emerged. The group’s findings only highlight “likely” amounts of sea level rise, meaning they do not represent worst-case scenarios.

“The world’s coasts provide a home to around 1.9 billion people and over half of the world’s megacities — all of which are in grave danger if we don’t act immediately to prevent rising temperatures and sea levels,” Hildalgo said in a statement. “Extreme high temperatures, coastal flooding, and more frequent natural disasters are becoming the new normal. ... This is what the climate crisis looks like now.”

Ice loss is accelerating in Greenland and Antarctica, scientists found. Permafrost, which contains enormous amounts of carbon that can be released as it thaws, has warmed to “record high levels.” Summer Arctic sea ice extent is now probably lower than at any time in “at least 1,000 years,” and the oldest, thickest ice has already declined by 90 percent.

And then there is the entire world ocean. “Over the 21st century, the ocean is projected to transition to unprecedented conditions,” the report states.

The ocean is losing oxygen, growing more acidic, taking up an increasing amount of heat, and becoming more stratified, with warm water at the surface preventing cooler, nutrient rich waters from rising. All of these changes have profound consequences for marine ecosystems.

Lynn Scarlett, the vice president for policy and government relations at the Nature Conservancy and a top-ranking Interior Department official during the George W. Bush administration, said the grim findings in Wednesday’s report should be a call to action.

Posted by Michael-in-Norfolk at Wednesday, September 25, 2019