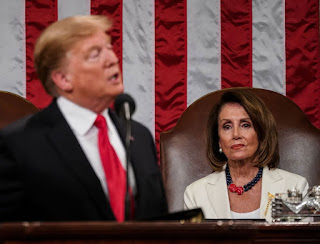 I like Andrew Sullivan's writing skills and applaud the fact that he finally left the GOP and has come to recognized the toxic force that party has become - he now needs to leave Catholicism, in my view - but in his latest column he seems too hard on Democrats and Nancy Pelosi in particular.  Yes, Pelosi has been cautious and has danced around impeachment out of fear of a reprise in 2020 of what Republicans suffered after their impeachment effort against Bill Clinton.  In the argument in favor of impeachment of Trump, the differences between Bill Clinton's lying about a personal sexual misdeed versus Trump's never ending lies and clear obstruction of justice are in totally different leagues.  Yet, a majority of American voters appear opposed to impeachment - something Pelosi must take into account like it or not and whether or not it is even a rational perspective. Plus, unless and until Democrats take control of the U.S. Senate, impeachment would ultimately go nowhere.  Indeed, Trump could be video taped raping a 13 year old girl (or boy, but that would more likely be the closeted Mike Pence) on the high altar of St. Peter's basilica, and today's Republicans would still not vote to impeach him,  Decency, morality and the rule of law long lost favor in today's GOP which worries only about the satiating the hatreds that motivate the party's racist and religious extremist base.  Of course, Democrats have other options which Sullivan lays out and, in the case of Trump's New York State tax returns, they ought to pursue vigorously. The following are highlights from Sullivan's latest column in New York Magazine:

I suspect many of us voted for the Democrats last fall because we wanted a serious check on President Trump’s intensifying authoritarianism. That includes many of us who don’t support the far left’s takeover of the Democrats, but who saw the urgency of an opposition with teeth, confronted as we are by a deranged, tyrannical bully in the White House. What would happen if the Mueller Report emerged with a Republican House still intact, we worried? How could we begin to investigate Trump’s tax returns, or his cronies’ corruption, or his foul pedophile friends, or his murky real estate money-laundering, if Paul Ryan, the Randian eunuch from Wisconsin, were still in charge?

It turns out, six months later, that on all these topics, the Democratic House majority didn’t matter much at all. Whenever a serious administration abuse of power seems to demand investigation, Speaker Pelosi springs almost instantly into inaction. There is nothing she won’t not do.

When, for example, a highly dubious decision years ago by Labor Secretary Alex Acosta — to give Jeffrey Epstein an incredibly lenient plea deal for the sexual abuse of 40 underage girls — blew back into the headlines, Pelosi instantly ruled out any notion of impeaching Acosta: “It’s up to the president, it’s his Cabinet. We have a great deal of work to do here for the good of the American people and we have to focus on that.”

Really, Madam Speaker, oversight of shady dealings by Cabinet officials is the work of the president now? And holding a corrupt administration to account is not “work … for the good of the American people”? This “distraction” from real “work” meme is, in fact, a Republican talking point.

The most epic moment of Pelosi’s oversight abdication was, of course, her response to the Mueller Report. She was completely out-foxed by Bill Barr’s shameless misdirection at first, and once his sleight of hand became obvious, she seemed to have no strategy to hold Trump to account in any way. She was presented with striking evidence that President Trump repeatedly abused the power of his office to obstruct justice — the charge that brought down Nixon, and one charge that forced even Bill Clinton into a Senate trial - and was all but invited by Mueller to move the ball forward through impeachment: “If we had confidence that the president clearly did not commit a crime, we would have said so.” Pelosi immediately, reflexively, punted.

Later this month, we will finally get testimony from Mueller. This week, the House Judiciary Committee has issued 12 new subpoenas for Trump officials, including Jared Kushner. This time, they tell us, they’re serious. These subpoenas come after almost all previous ones were rebuffed entirely by an unprecedented blanket assertion by the president that all oversight inquiries are of a partisan nature and should therefore be ignored. But last month the Democrats passed a resolution seeking court enforcement of their subpoena power. How long will this process take? Who knows?

Or take the issue of Trump’s tax returns. Judd Legum is aghast that it took the Democrats four months even to ask for them! When Trump (surprise!) refused to hand them over, Ways and Means chairman Richard Neal filed a lawsuit arguing that the reason he was doing so was not because he wanted to see if Trump had committed fraud or other financial crimes, but that he needed “to decide if legislative action is needed” on “the mandatory presidential audit program.” He believed the claim should be as modest as possible to help guarantee an eventual court victory. But “eventual” is the operative word here.

The goods are there though. So when Governor Andrew Cuomo signed a bill allowing Trump’s state tax returns to be examined directly by Neal, Neal refused, even though the data would be largely the same as the federal returns. He preferred to wait for the result of his own federal legal case — which could be months or years in coming! . . . It is an effective abandonment of a critical tool for exposing presidential corruption.

I know that aggressive oversight, especially impeachment hearings, is a politically fraught decision, full of risk. I know the polls suggest it splits the country and, by her own expert counting, divides the House Democrats as well. I know her party won the House in 2018 by focusing on health care, rather than Trump. I think that should be their focus next year as well. But fortune favors the brave. If she doesn’t act against a serious threat to the Constitution, voters will infer that the Democrats don’t actually believe there’s a threat. If she lets this president own the narrative, as he keeps doing, Democrats will end up following his story rather than their own.

And there is no essential conflict between holding impeachment hearings and making the case for your policies. It should be possible for a competent and gifted Speaker to do both.

The best gloss I can think of to explain Pelosi’s abdication is that she believes that it’s only a matter of time before Trump loses in 2020, so why risk alienating moderates who get nervous with the I-word now? Why impeach when the Senate will acquit? Why go to war now, when it might imperil electoral victory next year?

Here’s why. There is a strong possibility that Trump is going to win the next election. I know it’s early but the head-to-head polling against most of the Democratic candidates is very close — and that’s before the GOP has gotten to work on oppo research on those Democrats who aren’t well known. Incumbency in a strong economy is usually dispositive.

If Pelosi keeps playing it safe and Trump is reelected, it will set a precedent that a president can obstruct justice and be rewarded for it. He can avoid all serious congressional oversight and get away with it. The Congress will continue its journey as a withered limb in a Constitution that actually gives it pride of place, Article 1. And every time Trump gets away with another crime, or abuse of power, he is emboldened. Vindicated by re-election? God help us.

And what Trump now knows after six months of Democratic control of the House is that he is as free from congressional checks whether it is run by Democrats or Republicans. Pelosi has shown every future president that they can obstruct justice with impunity, refuse every subpoena with impunity, lie with impunity, and violate the separation of powers with impunity.

At some point, Madam Speaker, history may show you had one critical chance to stop this slide toward populist authoritarianism. And you decided you had better things to do.