Paul Ryan Admits He Was a Fraud All Along 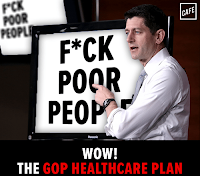 I have never liked former House Speaker Paul Ryan who I always saw as a liar and a fraud. While in office, Ryan cared about only two things - actually three, the third being staying in office - cutting taxes for the wealthy and slashing the social safety net for the less fortunate, all the while pretending to be a good Catholic despite all his actions contrary to the Church's social gospel. Before retiring, Ryan accomplished one thing: passage of the Trump/GOP tax cuts which have exploded the federal deficit - something Ryan supposedly cared about, but like all else with Ryan that story line was a lie.  A piece in Vanity Fair looks at Ryan's new and disingenuous book which tries to rewrite history and rehabilitate Ryan's abysmal record.  Here are article highlights:


After the release of the Access Hollywood tape, which featured the future president bragging to Billy Bush about how his celebrity entitled him to sexually assault women, Paul Ryan canceled a scheduled appearance with Donald Trump and announced he would not campaign on behalf of the Republican nominee. “I am not going to defend Donald Trump,” then-House Speaker Ryan reportedly told his party at the time. “Not now, not in the future.” Ryan probably assumed he wouldn’t need to defend Trump in the “future,” as the prevailing wisdom was that Hillary Clinton would send him back to the bowels of reality TV from whence he came. But it was still a notable disavowal even if, in true Ryan form, it made no move to rescind his tortured Trump endorsement.

Of course, Ryan would break his promise after Trump’s shock victory. The self-styled wonk would, again and again and again, defend the president, enable him, and respond to his daily outrages with feeble handwringing. But the Wisconsin Republican is now trying to rehabilitate his doormat reputation. . . . Ryan tees off on the president, depicting him as a narcissistic, divisive loon and “uneducated about the government”—revelations that only further highlight how Ryan was knowingly complicit in Trump’s nightmare government.

“We’ve gotten so numbed by it all,” Ryan tells Tim Alberta in American Carnage, which examines how Republicans came to embrace Trump after an acrimonious 2016 race. “Not in government, but where we live our lives, we have a responsibility to try and rebuild. Don’t call a woman a ‘horse face.’ Don’t cheat on your wife. Don’t cheat on anything. Be a good person. Set a good example.”

Ryan, who tells Alberta that he viewed his retirement as an “escape hatch” to get away from Trump, plays up the “adults in the room” myth, suggesting his deference allowed him to steer Trump on a better course.

It’s a line Ryan has echoed before. . . . And of course, it’s intended to paint Ryan in the best possible light, similar to John Kelly, Rex Tillerson, and others who suggested they only stood by Trump out of some high-minded sense of duty to the country. Of course, none actually succeeded in serving as a real moderating influence. They may be better than the sycophants he’s surrounded himself with now, but Kelly, Tillerson, and Ryan consistently failed to keep the president’s impulses in check. Worse, they lent a veneer of normalcy to a president who was decidedly not.

That Ryan is now back to bashing Trump is, perhaps, a step above some of his former colleagues, who have turned into rabid, mindless supporters of the president. But it’s hardly courageous to point out Trump’s plainly obvious defects after the fact. So far, just one Republican—Justin Amash, who left the party earlier this month—has openly criticized the president. “These guys have all convinced themselves that to be successful and keep their jobs, they need to stand by Trump,” Amash tells Alberta in the book. “But Trump won’t stand with them as soon as he doesn’t need them. He’s not loyal. They’re very loyal to Trump, but the second he thinks it’s to his advantage to throw someone under the bus, he’ll be happy to do it.”

Hopefully, history will be very harsh to Paul Ryan.

AND a coward who had no need to be one. Of all the swamp creatures other than McConnell, only Ryan, as Speaker, had the power and the authority to actually STOP Degenerate Don. And, as far as I can recall, McConnell has never claimed to be anything with a sense of decency.

I can't help hoping that for the rest of his miserable life, Rotten Ryan will torture himself with the knowledge of the difference between the good that he could have done and the good he has destroyed.