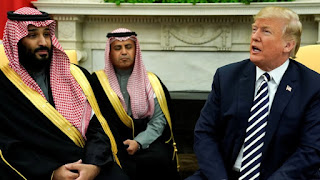 Maddeningly, America rarely seems to learn from past mistakes and seems doomed to repeat past fiascoes.  The Vietnam War should have been a start warning for the USA not to launch the Iraq War, yet war mongers like Dick Cheney - who had avoided service in Vietnam himself - blindly pushed the hapless George W. Bush to launch yet another disastrous war that has squandered trillions of dollars and cost countless lives not to mention setting the stage for the disaster that is today's Middle East.  A column in the Washington Post looks at another disaster that the USA and most western nations are repeating and draws the parallels between the West's earl support of Saddam Hussein and Saudia Arabia's Mohammed bin Salman.  Simply having a perceived common enemy does NOT make one your ally, especially if that alliance requires deliberate blindness to human rights abuses and atrocities. Today's supposed expediency sets the stage for tomorrow's nightmare.  Here are column highlights:


Once upon a time, there was a brutal and reckless dictator of an oil-rich Arab country who, despite his well-documented excesses, was stroked and supported by the United States and other Western governments. His crimes were terrible, went the rationale, but he was modernizing his country and he was holding the line against Islamist jihadism and Iran. Anyway, there was probably no alternative.

The ruler heard that message. He concluded that, as long as he kept supplying oil and opposing Iran, he was free to butcher his opponents and bully his neighbors.

His name, of course, was Saddam Hussein. The bet made on him by the United States and its allies directly led to Iraq’s invasion of Kuwait in 1990, and from there to the “endless wars” in the Middle East that are now almost universally bemoaned by the West’s foreign policy establishment.

And yet, 30 years later, those mandarins and the politicians they report to are blindly repeating the mistake. They are saying they abhor the blatant crimes of Saudi Arabia’s Crown Prince Mohammed bin Salman, including the murder of Post contributing columnist Jamal Khashoggi and the torture and imprisonment of women seeking greater rights. They see his bombing campaign in Yemen as a war-crime-ridden disaster.

Yet, at the summit of the Group of 20 in Osaka, Japan, a week ago, they cheerfully clustered around him. Not just President Trump but also prime ministers and presidents from the big European democracies. And not just them but also the leaders of India, South Korea and Japan, all of whom have received Mohammed bin Salman warmly in the past six months.

Ask them why, and you get an all-too-familiar response: The crown prince, who is also known as MBS, is the best chance for modernization in Saudi Arabia. He’s fighting the Islamist extremists, and he’s allied with us and with Israel against Iran. The alternatives to him are worse.

[U.N. special investigator] Callamard conducted a five-month investigation into Khashoggi’s murder and dismemberment inside the Saudi Consulate in Istanbul last October. On June 19, Callamard released a powerful report making the case that “Mr. Khashoggi has been the victim of a deliberate, premeditated execution, an extrajudicial killing for which the state of Saudi Arabia responsible” — and that Mohammed bin Salman was almost certainly complicit in the operation and in its subsequent coverup.

Callamard’s report called for a halt to the closed Saudi trial of 11 lower-level operatives blamed for the murder, and for an independent investigation by U.N. Secretary General António Guterres, or the FBI. The report also called for sanctions to be imposed on Mohammed bin Salman and his foreign assets “until and unless evidence is provided and corroborated that he carries no responsibility for this execution.”

At the G-20 summit, Trump met Mohammed bin Salman for breakfast and declared he was doing “a spectacular job.” Later, [Trump] the president answered a question about Khashoggi by saying there was no “finger directly” pointing at the crown prince — though both Callamard’s report and a CIA assessment have done just that.

Trump notwithstanding, she is counting on justice to come from the United States. “I think this is the only place where political accountability is going to work,” she said during a meeting at The Post.

There is still some hope of that: Legislation pending in the House would require the director of national intelligence to report on those responsible for the Khashoggi murder, and would require a visa ban to be applied to them. The Senate Foreign Relations Committee is expected to consider other bills this week. But as long as Trump is president, Mohammed bin Salman is unlikely to face direct U.S. sanction . . .

Like Saddam Hussein before him, Mohammed bin Salman has concluded that he is immune. Women he ordered tortured are still in prison. His planes are still bombing Yemen. And he is taking the first steps toward acquiring nuclear weapons. Because Western governments do not stop him now, they will have to do it later — when the cost is likely to be far higher.

Those who do not know history - or, in this case, who choose to ignore it - are doomed to repeat it, often with even worse consequences down the road.  Saudi Arabia is NOT America's ally and MBS is no friend to decent moral people.
Posted by Michael-in-Norfolk at Monday, July 08, 2019