The Parallels Between Evangelicals and Pro-Nazi German Christians 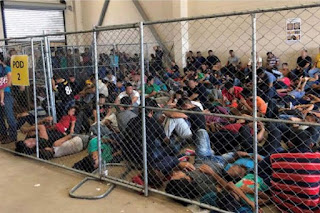 While there are surely many good evangelical Christians in America, far too many are remaining silent and allowing themselves to be defined by the likes of Franklin Graham, James Dobson, Tony Perkins, Jerry Falwell, Jr., who not only are all in for Donald Trump, but are embracing his racist policies with enthusiasm and, more dangerously, legitimizing human rights abuse in the eyes of their gullible and racist followers.  A piece in Sojourners looks at the dangerous rhetoric of James Dobson which disturbingly parallels that of German pastors and theologians in Hitler's Third Reich. 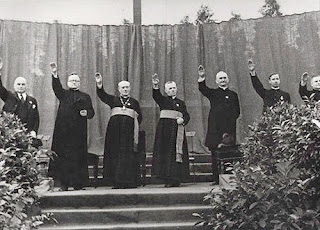 The ultimate problem is that these supposed "leaders" are racists - especially Tony Perkins for Family Research Council, a certified hate group - and their anti-immigrant animus is ultimately due to one factor: the immigrants at America's southern border have brown, not white, skin. Evangelicals who remain silent and fail to condemn such rhetoric in the end become complicit in the horrors that it legitimizes.   They will become no better than their counterparts in Germany 80 years ago. Here are column highlights:


Growing up in conservative evangelical churches in North Carolina, the name of Dr. James Dobson and his organization, Focus on the Family, were regularly cited by my pastors as authorities on what they considered the most pressing social issues. Dobson remains influential and, although he has not led Focus on the Family for 15 years, his latest organization, Family Talk, focuses on “marriage, parenthood, evangelism, and the sanctity of human life and encouraging righteousness in the culture.” . . . which is why his rhetoric concerning immigrants in his July 2019 newsletter is so disturbing.

The characterization of the men, women, and children in the camps includes several troubling phrases. They are described as carriers of “lice, scabies, and other diseases”; they sit silently with “plaintive eyes;” they are from “the lowest rung of many societies.” The most alarming rhetoric occurs in the closing paragraph:

What I’ve told you is only a glimpse of what is occurring on the nation’s border. I don’t know what it will take to change the circumstances. I can only report that without an overhaul of the law and the allocation of resources, millions of illegal immigrants will continue flooding to this great land from around the world. Many of them have no marketable skills. They are illiterate and unhealthy. . . . Their numbers will soon overwhelm the culture as we have known it, and it could bankrupt the nation. . . . we have met a worldwide wave of poverty that will take us down if we don’t deal with it. And it won’t take long for the inevitable consequences to happen.

As a student of the history of biblical interpretation, the rhetoric employed by Dobson and other evangelical leaders is frighteningly similar to that of German pastors and theologians in the Third Reich. It appears that Christians have either forgotten or are ignoring the dark history of Christianity’s marriage to partisan politics and nationalist agendas.

Comparing current figures and events with Nazi Germany is fraught with difficulties, but the similarities in the language and dehumanization of a people group from a leader within Christianity are too obvious to ignore. I am not saying anyone is a Nazi; however, Dobson’s rhetoric of xenophobia and nationalism in combination with Christianity is not unlike Christian pastors who supported the Nazi Party.

The closing paragraph of Dobson’s newsletter reminds me of a 1933 book by the German theologian Gerhard Kittel. The problem of the Jews living in Germany was, according to Kittel, based on the fact that they are a people perpetually in a foreign land and thus, as foreigners, they have brought decadence to Germany. In an effort to solve this “problem” from a Christian theological perspective, Kittel offers four possible solutions: 1) Extermination (which he rejects on practical, rather than moral grounds); 2) Deportation (which he also considers impractical on political grounds); 3) Assimilation (an idea abhorrent to Kittel); or 4) Separation (the only possible solution).

By advocating for the separation of the Jews in order to protect the German way of life, Kittel and other Christians were able to support the cruel and inhumane policies of the Nazi Party. They considered it their Christian duty to preserve their German way of life. Kittel even warned of becoming soft toward the Jews. Assimilation was the worst possible solution, further infecting the German culture, and was to be avoided at all costs, even if the cost was the loss of empathy and humanity. There is simply no other place to ‘house’ them.

The rhetoric of evangelicals like Dobson, Jerry Falwell, Jr. or [Franklin] Jack Graham, legitimizes the dehumanizing policies of the Trump administration at the border in the name of protecting their version of American “culture.” The characterization of migrants at the border as disease-carriers, criminals, swindlers, and uneducated provides further legitimization that these are the type of people that American culture must be protected from. Thus, the policy of family separation is no longer inhumane or immoral, but, according to Dobson, the only practical solution. Evangelical Christianity has sided with the oppressor, not the oppressed.

Dobson’s views on immigration are based on his militarized evangelical masculinity. White, American, evangelical men are to protect family values at all costs. Migrants from Mexico, Guatemala, Honduras, or El Salvador are perceived as a threat to these “family values.” The violence committed against these people is justified because the men at the border are assumed to be “hardened criminals and drug runners,” or even terrorists.

During this period in American history, Christians do well to remember the history of the church during the Nazi era and avoid the mistakes they made. Vocal supporters of the Nazis from Christian thinkers like Kittel, Walter Grundmann, or Emmanual Hirsch, are condemned from all sides for their support of the brutal treatment of the Jews.

The atrocities committed against asylum seekers are well-known and new stories are being published daily documenting the horrors of life in the camps. A recent ProPublica story uncovered a Facebook group of Border Patrol agents and documented their vile jokes about Óscar Alberto Martínez Ramírez and his daughter, Valeria, who drowned in an attempt to cross the Rio Grande. Christians who see no alternatives to putting people into camps, not only lack political and theological imagination, they make these policies, behaviors, and language theologically permissible.

One can only hope decent Christians will rise up and oppose these policies and deliberate acts of cruelty. Meanwhile, one can also hope that Dobson and those like him will accelerate the extinction of evangelical Christianity in America.
Posted by Michael-in-Norfolk at Monday, July 08, 2019

It had been at first the Protestant church leaders that joined the Nazis ... as they have a deep rooted anti-semitism implemented by Martin Luther himself, a fierce Anti-Semit. After the Concordat the Cathoilics had been smoothed, and the austrian Wallpainter has got more power over them. But it was despite some true christians among the Protestants most Catholics that withstood the Painters rgime and inhumanity. The Gestapo never tried a raid f.e. in Münster a fierce stronghold against the Nazi party, as they feared a Catholic rebellion in the aftermath. and it was Kardinal Graf von Galen who made a speach in the cathedral against the Nazis.