Will the NRA Meltdown Aid Democrats and Gun Control? 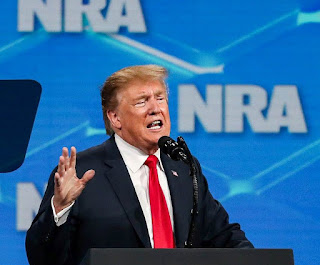 On Tuesday the Virginia General Assembly will open a special session to address the issue of enacting common sense gun control.  It is a near guarantee that most Republicans in both houses of the General Assembly will continue their slavish self-prostitution to the NRA and gun industry.  Thus, the question of the hour will be whether the NRA's current upheaval and financial meltdown might embolden a few Republicans to reach across the aisle to join Democrats in at last updating Virginia's abysmal gun laws. At the national level, a feeble NRA could harm the re-election efforts of Donald Trump and far right Republicans. For those who care about gun control and responsible government in general, the NRA's troubles are most welcome.  A piece in Politico looks at the ongoing turmoil and possible consequences.  Here are highlights:

The National Rifle Association aired an avalanche of TV ads and pushed its 5 million-plus members to the polls for Donald Trump in 2016, propelling him in the Rust Belt states that delivered him the presidency.

Now, the gun rights group is in total meltdown — and senior Republicans and Trump 2020 officials are alarmed.

In recent weeks, the NRA has seen everything from a failed coup attempt to the departure of its longtime political architect to embarrassing tales of self-dealing by top leaders. The turmoil is fueling fears that the organization will be profoundly diminished heading into the election, leaving the Republican Party with a gaping hole in its political machinery.

With the Chamber of Commerce and Koch political network withdrawing from their once-dominant roles in electing conservatives, Republicans worry that three organizations that have long formed the core of their electoral infrastructure will be effectively on the sidelines.

The predicament has so troubled some Republicans that they are calling on the famously secretive NRA to address its 2020 plans. Within the past week, senators have privately expressed concerns about the group to National Republican Senatorial Committee Chairman Todd Young.

With the organization mired in palace intrigue and confronting a daily barrage of negative publicity, some NRA officials are skeptical a 2020 plan will emerge. Many Republicans are convinced the job of turning out Second Amendment supporters will fall to the cash-flush Republican National Committee, which is constructing a massive get-out-the-vote and data machine devoted to turning out conservatives.Jane Timken, chairwoman of the Ohio GOP, said her organization would work closely with the RNC to microtarget firearm owners. The national party, Timken noted, has compiled extensive voter data through sources ranging from gun licenses to gun magazine subscriptions.

Concerns over the NRA intensified last week after the resignation of Chris Cox, who had been the head of its lobbying arm since 2002. . . . . With Cox gone, it's an open question who will oversee the NRA’s 2020 strategy.  “Chris Cox is the guy everybody dealt with,” said Steven Law, president of the Senate Leadership Fund, a super PAC closely aligned with Majority Leader Mitch McConnell.

The organization's troubles are hard to overstate. The most serious threat is an investigation by New York state attorney general's office into its tax-exempt status. In April, NRA President Oliver North was ousted in an ugly public spectacle in which he declared the group was in a "clear crisis." News organizations have also reported that NRA chief executive Wayne LaPierre used $275,000 of the group's money to buy luxury clothes at Zegna in Beverly Hills, Calif., and that the organization logged tens of thousands of dollars in other expenses that benefited its officials.

Trump weighed in on the NRA's problems Tuesday morning, tweeting that the group is a "victim" of "political harassment by New York State and Governor Cuomo."

Issues surrounding the Republican Party's outside infrastructure go beyond the NRA. The Chamber of Commerce, a key player in Republican politics over the past decade, spent just $10 million during the 2018 cycle, about a third of what it spent during the previous election cycle, according to the Center for Responsive Politics. The scale back has led many to believe the organization, a staple of the business community, is preparing to play a diminished role in 2020.

Meanwhile, the Koch network is gradually shifting away from partisanship and toward policy issues like addressing poverty and drug addiction. The network, which like the Chamber has at times found itself at odds with the president, plans to sit out the 2020 presidential race and is recasting itself in a nonpartisan fashion.

The uncertainty surrounding all three groups is likely to increase pressure on America First Action, a super PAC devoted to backing Trump.