Why Pence Must Go Down with Trump 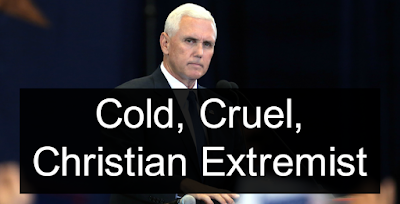 As unfit for office and as large a threat Donald Trump may be to the nation, should he be forced from office due to collusion with Russia, out right treason or some other cause, it is imperative that Mike Pence be caught up in the maelstrom and forced from office along with him.  Why? First, because I believe that Pence's "Sergeant Schultz routine" is a charade and that he was very much aware of the activities of the Trump/Pence campaign.  Secondly, because Pence represents as much of a clear and present danger to America as Trump poses. Pence is just as dishonest as Trump and, perhaps, more frighteningly, the man is deranged religious zealot who believes that he is on a mission from God to impose the equivalent of a Christofascist theocracy on the nation.   A column in the New York Times focuses on Pence and just how dangerous he is for constitutional government and secular society.  Indeed, the author of a biography on Pence says Trump is the lesser evil.  Here are excerpts:

There are problems with impeaching Donald Trump. A big one is the holy terror waiting in the wings.

That would be Mike Pence, who mirrors the boss more than you realize. He’s also self-infatuated. Also a bigot. Also a liar. Also cruel.

To that brimming potpourri he adds two ingredients that Trump doesn’t genuinely possess: the conviction that he’s on a mission from God and a determination to mold the entire nation in the shape of his own faith, a regressive, repressive version of Christianity. Trade Trump for Pence and you go from kleptocracy to theocracy.

That’s the takeaway from a forthcoming book by the journalists Michael D’Antonio, who previously wrote “The Truth About Trump,” and Peter Eisner. It’s titled “The Shadow President: The Truth About Mike Pence,” it will be published on Aug. 28 and it’s the most thorough examination of the vice president’s background to date.

The book persuasively illustrates what an ineffectual congressman he was, apart from cozying up to the Koch brothers, Betsy DeVos and other rich Republican donors; the clumsiness and vanity of his one term as governor of Indiana, for which he did something that predecessors hadn’t and “ordered up a collection of custom-embroidered clothes — dress shirts, polo shirts, and vests and jackets — decorated with his name and the words Governor of Indiana”; the strong possibility that he wouldn’t have won re-election; his luck in being spared that humiliation by the summons from Trump, who needed an outwardly bland, intensely religious character witness to muffle his madness and launder his sins; and the alacrity with which he says whatever Trump needs him to regardless of the truth.

“People don’t understand what Pence is,” D’Antonio told me. Which is? “A religious zealot.”

And D’Antonio said that Pence could end up in the White House sooner than you think. In addition to the prospect of Trump’s impeachment, there’s the chance that Trump just decides that he has had enough.

So it’s time to look harder at Pence. “The Shadow President” does. It lays out his disregard for science, evident in his onetime insistence that smoking doesn’t cause cancer and a belief that alarms about climate change were “a secret effort to increase government control over people’s lives for some unstated diabolical purpose,” according to the book.

It suggests callousness at best toward African-Americans. As governor, Pence refused to pardon a black man who had spent almost a decade in prison for a crime that he clearly hadn’t committed. He also ignored a crisis — similar to the one in Flint, Mich. — in which people in a poor, largely black Indiana city were exposed to dangerously high levels of lead. D’Antonio told me: “I think he’s just as driven by prejudice as Trump is.”

At Trump’s urging and with taxpayer money, he and his wife, Karen, flew to a football game in Indianapolis just so he could make a big public gesture of leaving in protest when, predictably, some of the players took a knee during the national anthem.

And, following Trump’s lead, he rallied behind the unhinged former Arizona sheriff Joe Arpaio. . . . The conservative columnist George Will seized on Pence’s speech to write that Pence had dethroned Trump as “America’s most repulsive public figure.”

“He is absolutely certain that his moral view should govern public policy,” D’Antonio told me.

D’Antonio then recounted two stories that he heard from college classmates of Pence’s after the book had gone to bed, so they’re not in there. . . . . Another involved a college friend of Pence’s who later sought his counsel about coming out as gay. D’Antonio said that Pence told the friend: “You have to stay closeted, you have to get help, you’re sick and you’re not my friend anymore.”

I asked D’Antonio the nagging, obvious question: Is America worse off with Trump or Pence?

“I have to say that I prefer Donald Trump, because I think that Trump is more obvious in his intent,” he said, while Pence tends to “disguise his agenda.” D’Antonio then pointed out that if Pence assumed the presidency in the second half of Trump’s first term, he’d be eligible to run in 2020 and 2024 and potentially occupy the White House for up to 10 years.  Heaven help us.

Pence must never occupy the White House.  Nothing would be more fitting than seeing his sanctimonious, cruel, bigoted ass go down in flames with Trump.