Will Southern Suburbs Abandon the GOP? 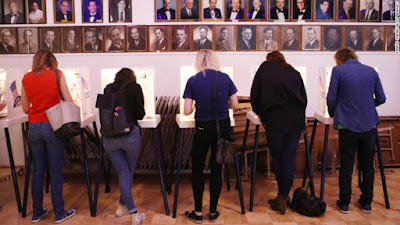 One of the keys to turning Virginia blue in statewide elections has been growing support for Democrats in suburban areas, particularly Northern Virginia.  The reality has become that if a Democrat carries the so-called "urban crescent" from Northern Virginia southward to Richmond and then southeaster to Hampton Roads, there simply are not enough votes in the rural, reactionary regions of the state to overcome the deficit.  One aspect of this change has been the flight of college educated whites from the GOP, a party that now is overtly racist, panders to Christian extremists, and embraces ignorance - all thing deemed offensive by a majority of college educated whites (and I would argue, decent, truly moral people). As the 2018 midterms approach (and 2020 two years from now), one of the questions of the day is whether the flight from the GOP in other southern suburbs can propel Democrats to statewide victories and flipping congressional districts.  A piece in CNN looks at the phenomenon.  Here are excerpts:

One key measure of any Democratic wave in the midterm elections will be whether it crests high enough to overcome the formidable Republican defenses in the growing suburbs across the South. The answer will have implications that extend far beyond 2018.

While Democrats have notched significant gains since the 1990s among white-collar suburban voters in most parts of the country, they have until recently made very little progress at loosening the Republican hold on affluent and increasingly racially diverse suburbs around such Southern metro areas as Atlanta, Houston and Dallas.But suburban unease with Donald Trump's turbulent presidency may finally provide Democrats an opening to establish a beachhead in such places -- a development that would rattle the electoral map. Although the recoil from Trump among white-collar suburbanites inside the South is not as great as outside of it, both public and private polls signal that enough suburban voters are pulling away from him to create much greater opportunity than usual for Democrats this fall in the governor's race in Georgia, Senate races in Tennessee and Texas, and several suburban House seats across the region.
[W]e are also definitely making inroads first and foremost with college-educated white women, but also college-educated white men."Many of the most vulnerable Republican House seats around the country are centered on white-collar suburbs. Democrats have strong opportunities in suburban seats from New York, New Jersey and Philadelphia through Northern Virginia, Chicago, Minneapolis, Detroit, Denver and Los Angeles. That vulnerability is rooted in the unusual resistance Trump faces among well-educated white voters: Three national polls last week each found that around 60 percent of whites holding at least a four-year college degree disapproved of his performance.
In addition, gains in white-collar suburbs will be critical to Democratic prospects in the Georgia governor's race between African-American Democrat Stacey Abrams and Republican Secretary of State Brian Kemp; the highly competitive Tennessee Senate contest between former Democratic Governor Phil Bredesen and Republican Rep. Marsha Blackburn; and the more uphill, but still competitive, challenge by Democratic Rep. Beto O'Rourke against Republican Sen. Ted Cruz in Texas.
Even if Democrats fall short in some or all of these races, a significantly improved performance in white-collar suburbs could offer them a roadmap for seriously contesting North Carolina, Georgia and perhaps even Texas against Trump in 2020 -- when African-Americans, Latinos and other minority voters, who mostly lean Democratic, will likely comprise a bigger share of the electorate than this fall.But in virtually every state in which Democrats have grown more competitive since the early 1990s, increased minority participation has been only part of the equation -- it has been necessary, but not sufficient. Whether in California, Illinois and New Jersey, which tilted toward Democrats in the 1990s, or Colorado, Virginia and (more equivocally) North Carolina, where the party strengthened its position in the 2000s, the winning Democratic formula has combined both an increase in minority participation and improved performance among college-educated white voters. In the states where Democrats have gained ground in recent decades, those two changes have offset lackluster, and an often deteriorating, performance with evangelical, rural and non-college educated white voters.[Wendy] Davis pointed to two principal reasons Southern suburbs have remained so difficult for Democrats.  "One is that we've had a booming economy and it's the economy stupid as the saying goes, so people have felt pretty satisfied with where things are," Davis said. "We also suffer the problem of being absolutely ignored in presidential election contests which means that we haven't built the infrastructure that's necessary to communicate with a lot of the voters that are needed."
The Democratic improvement in white-collar suburbs in other regions has been keyed largely by cultural affinity, since many college-educated voters, especially women, take more liberal positions on social issues from abortion and gay rights to gun control. But fewer Southern suburbanites are social liberals, probably because more of them than elsewhere are evangelical Christians or otherwise religiously traditional.Democrats still confront all of these barriers this year. But Trump's rise has provided them a new opening. With his racially infused nationalism and belligerent personal style, Trump conspicuously lost ground across many Southern suburbs in his 2016 race against Hillary Clinton when compared to Mitt Romney's performance in the same places in 2012. . . . in key suburbs around the major metropolitan areas, such as Gwinnett and Cobb counties outside of Atlanta, the shift away from the GOP was undeniable and ominous for Republican strategists. . . . Basically we've traded the smaller, slower growing more rural counties for larger fast growing suburban counties."In last November's Virginia governor's race, Democrat Ralph Northam posted big advances not only in suburbs outside of Washington DC, which politically behave more like Northern suburbs, but also the suburban communities around Richmond, which have tilted more reliably Republican.A more immediate problem for Texas Democrats, he said, may be improving their performance among Latino voters, among whom Republicans have retained a significant minority of support even under Trump.Still, the most recent statewide poll conducted by the University of Texas and the Texas Tribune in June shows some clear openings for Democrats among well-educated white voters who have previously resisted them.
[N]ow in Georgia, he adds, "If you are the business community, you have to think twice about do you get behind a Republican as you normally would, or would Kemp scare away business?" . . . Whether or not Abrams makes history as the nation's first female African-American governor, November's results in suburban Atlanta will provide one revealing measure of whether Democrats can truly pressure Trump in 2020 in Georgia -- and perhaps elsewhere across the South.

I truly hope that Democrats replicate Northam's ground game which resulted in a surge of Democrat turn out across demographic groups.  Of course, Gillespie's decision to tie himself to Trump made that all the easier.

Posted by Michael-in-Norfolk at Wednesday, August 01, 2018