Trump/Pence's Ultimate Betrayal of Its Base 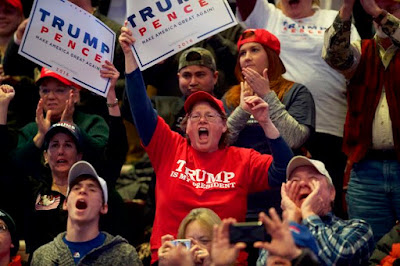 Nobel Prize winning economist Paul Krugman hits a home run in a column in the New York Times that looks at the ways the Trump/Pence regime - and the Republican Party as a whole - has betrayed and continues to betray its white working class base.  A base that seems willing to believe any lie so long as its racial animosities are pandered to. The latest betrayal is the nomination of Brett Kavanaugh to the U.S. Supreme Court.  While Kavanaugh may provide an anti-gay, pro-Christofascist vote on the Court to the delight of evangelical Christians, he will likely do nothing but harm them economically and help lock in the wage stagnation that has harmed so many working Americans even as corporate profits have soared and the wealthy have claimed a growing percentage of all wealth in America.  Here is Krugman's column:

By now, it’s almost a commonplace to say that Trump has systematically betrayed the white working class voters who put him over the top. He ran as a populist; he’s governed as an orthodox Republican, with the only difference being the way he replaced racial dog-whistles with raw, upfront racism.


Many people have made this point with respect to the Trump tax cut, which is so useless to ordinary workers that Republican candidates are trying to avoid talking about it. The same can be said about health care, where Democrats are making Trump’s assault on the Affordable Care Act a major issue while Republicans try to change the subject.

But I think we should be seeing more attention devoted to the way Trump’s nomination of Brett Kavanaugh for the Supreme Court fits into this picture. The Times had a good editorial on Kavanaugh’s anti-worker agenda, but by and large the news analyses I’ve seen focus on his apparently expansive views of presidential authority and privilege.

I agree that these are important in the face of a lawless president with authoritarian instincts. But the business and labor issues shouldn’t be neglected. Kavanaugh is, to put it bluntly, an anti-worker radical, opposed to every effort to protect working families from fraud and mistreatment.

The most spectacular example is his opinion that Sea World owed no liability for a killer whale attack that killed one of its workers, because she should have known the risks. He has declared the Consumer Financial Protection Bureau, which helps control the financial fraud against working families that played a major role in the 2008 crisis, unconstitutional. He’s taken an extremely expansive view of the rights of business to suppress union organizing.

This is all, by the way, the opposite of populism. The public strongly supports worker protections. The ongoing campaign to take them away is an act of conservative elites, people who have made their careers by carrying water for business interests, and is being implemented in effect by stealth under the noses of voters who thought Trump was on their side.

And this betrayal matters much more for workers than, say, Trump’s trade bluster. There’s growing evidence that wage stagnation in America – the very stagnation that angers Trump voters — isn’t being driven by impersonal forces like technological change; to an important extent it’s the result of political changes that have weakened workers’ bargaining power. If Trump manages to install Kavanaugh, he’ll help institutionalize these anti-worker policies for decades to come.