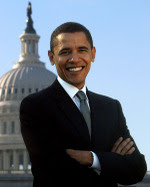 In conjunction with the 14th anniversary of the signing of the military policy banning gays and lesbians from serving openly in the military, the Human Rights Campaign has asked the leading Democratic candidates for President to respond to the question, “If you are elected President, what concrete steps would you take to overturn ‘Don’t Ask, Don’t Tell?’ As I have indicated before, this flawed and discriminatory policy needs to be repealed as soon as practicable. Here is Barack Obama's response:

Fourteen years ago, the Democratic Party faced a test of leadership, and our party failed that test. We had an opportunity to be leaders on the World stage in eliminating discrimination against gay and lesbian service members, to recognize the patriotism and heroism of the hundreds of thousands of gay and lesbian citizens who have served our country. Instead, we bowed to fear and prejudice. We were told that American soldiers weren’t ready to serve next to gay and lesbian comrades. We were told that our airmen, sailors and Marines would lose their “unit cohesion” if we implemented a policy of equality. And so, rather than embracing leadership and principle, we embraced Don’t Ask, Don’t Tell — a policy that is antithetical to the values of honor and integrity that our military holds most dear. Patriotic gay and lesbian Americans are now told that they may serve their country only if they hide their true identities. They are forced to live a lie as the price of risking their lives for their country.
Fourteen years later, the United States of America lags far behind. We lag behind our military allies, who are repudiating discrimination against lesbian and gay soldiers in ever increasing numbers — in Great Britain, Canada, Israel, nearly every NATO member in Europe — all with no impact upon military readiness and performance. And our politicians lag behind the American people, who now call for the repeal of Don’t Ask,Don’t Tell in super-majority numbers. It is time for a change.
As president, I will work with Congress and place the weight of my administration behind enactment of the Military Readiness Enhancement Act, which will make nondiscrimination the official policy of the U.S. military. I will task the Defense Department and the senior command structure in every branch of the armed forces with developing an action plan for the implementation of a full repeal of Don’t Ask, Don’t Tell. And I will direct my Secretaries of Defense and Homeland Security to develop procedures for taking re-accession requests from those qualified service members who were separated from the armed forces under Don’t Ask, Don’t Tell and still want to serve their country. The eradication of this policy will require more than just eliminating one statute. It will require the implementation of anti-harassment policies and protocols for dealing with abusive or discriminatory behavior as we transition our armed forces away from a policy of discrimination. The military must be our active partners in developing those policies and protocols. That work should have started long ago. It will start when I take office.
America is ready to get rid of the Don’t Ask, Don’t Tell policy. All that is required is leadership.
Posted by Michael-in-Norfolk at Friday, November 30, 2007