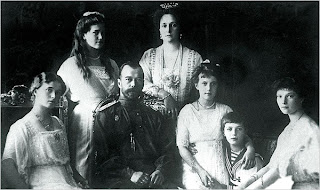 This post is way out of the norm, but this is my blog after all. For those who do not know, I was a history major at the University of Virginia with an emphasis on Russian history. I always found the late Imperial period fascinating. Moreover, for two years one of my neighbors down the street was Anna Anderson of Anastasia fame (Ingrid Bergman played her in an old movie of that name). Therefore, this story of new discoveries about the fate of the Imperial Family in Yekaterinburg (http://www.nytimes.com/2007/11/25/world/europe/25czar.html?em&ex=1196139600&en=60b6b14fb897da17&ei=5087%0A), was obviously something that I'd find interesting.
As the story notes, DNA testing of Anna Anderson's tissue with that of Prince Phillip, spouse of Queen Elizabeth II, supposedly proved Anna Anderson to be a fraud (Prince Phillip is from the former royal house of Greece and a descendant of the Russian Imperial house). However, (1) the British Royal family had every reason to want her to not be genuine, and (2) no one has ever been able to explain how she knew some of the information she knew if she was not genuine. Surprisingly, on the latter issue, a number of Russian emigres settled around Charlottesville and maintained that she was the genuine item, including the son of Nicholas' physician who had lived at Court with the Tsar's family.
On the former issue, the treatment Russian royals received from the British royal family is down right shameful. Queen Alexandra, mother of King George V, and the Dowager Empress Marie, Tsar Nicholas' mother were sisters. In addition, the Tsarina, Alexandra, was a granddaughter of Queen Victoria. In short, George V was a first cousin to BOTH Nicholas and Alexandra by the two sides of his family tree. Moreover, there were numerous other relationships by blood and marriage between the royal houses. Nonetheless, King George V not only did nothing to rescue the Tsar and his family, but also allowed his wife, Queen Mary, to act like a virtual vulture in her dealings with the Romanovs in exile, taking advantage of their desperate need to sell most everything they had escaped with to survive financially. Often she purchased jewels , artwork, and other assets for perhaps 10 cents on the dollar of their true value. One crown now often worn by Queen Elizabeth II is actually a crown bought at a pittance by Queen Mary from the Grand Duchess Vladimir. Talk about screwing over one's relatives. The woman was despicable and incredibly greedy.

But I digress. It will be interesting to see what further tests reveal (subject to the caveat of not trusting the British royal house). Here are some story highlights:

YEKATERINBURG, Russia — On the outskirts of this burly industrial center, off a road like any other, on a nowhere scrap of land — here unfolded the final act of one of the last century’s most momentous events. A short way through a clearing, toward a cluster of birch trees, the killers deposited their victims’ bodies, which had been mutilated, burned and doused with acid to mask their origins. It would be 73 more years, in 1991, before the remains would be reclaimed and the announcement would ring out: the grave of the last Russian czar, Nicholas II, and his family had been found. But the story does not end there. The remains of the czar’s son, Aleksei, and one daughter, whose identity is still not absolutely clear, were missing.

Only in the past few months have these questions dating from the Russian revolution apparently been resolved here, and only by a group of amateur sleuths who spent their weekends plumbing the case. In fact, it appears that the clues to what happened to the two children were always there, waiting to be found. All that was needed was to listen closely to the boastful voices of the killers. Their accounts are in secret reports in Soviet-era archives, one of which offered the most tantalizing hint: a single phrase in the recollection of the chief killer that seemed to suggest where the two bodies might have been deposited.

“All of them wanted to leave a trace in history, for they considered that this was a kind of heroic deed,” said Vitaly Shitov, who lives in the area and undertook a review of the testimony to hunt for the remains. “They wanted to promote their roles.” Following that wisp of a clue this summer, Mr. Shitov and other amateur investigators went to where the other remains had been found — and they kept walking. Away from the road, about 70 yards from the first burial ground, is a slightly elevated area among the trees. It is there that the bodies of Aleksei, 13, and his sister were apparently consigned.

So it seems that for all the years since the first discovery, even as people made pilgrimages to the site and wondered what had happened to Aleksei and his sister, their remains were only a short stroll away. Scientists in Russia and the United States are testing the new finds extensively. The sister is believed to be Maria, 19, though that is not entirely settled. Others long conjectured that the sister was Anastasia, 17, a theory that fed a belief that she survived. (A woman named Anna Anderson was one of several who over the years claimed to be Anastasia, but DNA testing later disproved her.)

Sergei Pogorelov, an archaeologist who was called in to oversee the work, said that about 15 intact bone fragments were recovered, and more than 40 pieces of charred bone. Mr. Pogorelov emphasized that many of the reservations about the discoveries at the first site cropped up because the excavation there had been done haphazardly. This time, he said, a professional archaeological dig was done, and the Russian Orthodox Church was invited to observe. “We have tried to avoid the mistakes that they made in 1991,” he said. “Before, there was simply not any scientific method.”

For now, the church has declined to say whether it considers the newly found remains genuine, pending further tests. But people who have long sought the remains say they are hopeful that once the results are in, the church will formally conduct a service at the cathedral in St. Petersburg to lay to rest the final remains of the Romanovs. “This brings closure to a very sad chapter in Russian history,” said Peter Sarandinaki, an American of Russian descent who started an organization to help find the remains and had conducted several searches here. “It is because their murder symbolizes the start of a diabolic era in world history. And now that has all come to an end.”

On a final note, the Russian Orthodox Church canonized Nicholas II and his family. Having read the diaries of Nicholas and Alexandra and some of the writings of the daughters (Grand Dutchess Olga in particular), they were indeed very religious and appear to have been basically good people. Sadly, they were placed by their births and marriage in positions that required skills and abilities that were far beyond their capabilities. They would have made great constitutional monarchs, but were not cut out to be the absolute rulers that Imperial Russian needed.
Posted by Michael-in-Norfolk at Sunday, November 25, 2007

I, too, was a history major and have long been fascinated by the fate of the Romanovs. My interest was kindled in 1956 when I saw the movie "Anastasia" with Ingrid Bergman. I don't know how accurate it was, but it made a great impression on my eleven year old self.

I didn't know how poorly the British royals treated their relatives. Good thought about how Nicholas and Alexandra might have fared in another time and another place.

Fascinating Michael yes you would post this ;-) The Romanovs were treated badly by the Windsors, should we be surprised look how they treat their own family members,bunch of Vultures with no Emotional attachments.

Linked you BTW I was surprised at my omission since I freq read your Blog.