Trump’s Sister: Trump has "No Principles" and "You Can’t Trust Him" 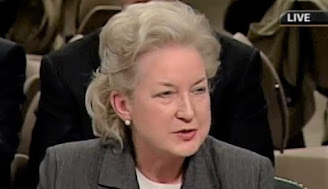 Some of Donald Trump's family members are among his most candid critics as a new secretly recorded tape of his sister, a retired federal judge, talking about her brother indicates.  One can only imagine how furious the malignant narcissist is that his sister has his number and was candid in talking with Trump's niece whose book he attempted to block.  The comments also were scathing of his evangelical base who have betrayed everything they pretend to support and who who history will likely view as having hastened the demise of Christianity as  the majority religion in America through their hypocrisy and embrace of cruelty.  The timing of the release of the tapes and transcripts is delicious since it is on the eve of the Republican convention that launches tomorrow and which is sure to be filled with lies and falsehoods. Here are highlights from the Washington Post:

Maryanne Trump Barry was serving as a federal judge when she heard her brother, President Trump, suggest on Fox News, “maybe I’ll have to put her at the border” amid a wave of refugees entering the United States. At the time, children were being separated from their parents and put in cramped quarters while court hearings dragged on.

“All he wants to do is appeal to his base,” Barry said in a conversation secretly recorded by her niece, Mary L. Trump. “He has no principles. None. None. And his base, I mean my God, if you were a religious person, you want to help people. Not do this.”

Barry, 83, was aghast at how her 74-year-old brother operated as president. “His goddamned tweet and lying, oh my God,” she said. “I’m talking too freely, but you know. The change of stories. The lack of preparation. The lying. Holy shit.”

Lamenting “what they’re doing with kids at the border,” she guessed her brother “hasn’t read my immigration opinions” in court cases. In one case, she berated a judge for failing to treat an asylum applicant respectfully.

“What has he read?” Mary Trump asked her aunt. “No. He doesn’t read,” Barry responded.

In the weeks since Mary Trump’s tell-all book about her uncle has been released, she’s been questioned about the source of some of the information, such as her allegation that Trump paid a friend to take his SATs to enable him to transfer into the University of Pennsylvania. Nowhere in the book does she say that she recorded conversations with her aunt.

In response to a question from The Washington Post about how she knew the president paid someone to take the SATs, Mary Trump revealed that she had surreptitiously taped 15 hours of face-to-face conversations with Barry in 2018 and 2019. She provided The Post with previously unreleased transcripts and audio excerpts, which include exchanges that are not in her book.

Barry has never spoken publicly about disagreements with the president, and her extraordinarily candid comments in the recordings mark the most critical comments known to have been made about him by one of his siblings. No one else in the family except Mary Trump has publicly rebuked the president.

The transcripts reveal the depths of discord between the president and his sister, illuminating a rift that began when she asked her brother for a favor in the 1980s, which Trump has frequently used to try to take credit for her success.

Mary Trump, 55, told The Post recently that her uncle is unfit to be president and she plans to do “everything in my power” to elect Joe Biden.

The allegation that the president paid someone to take his SATs, which was one of the most publicized allegations in Mary Trump’s book “Too Much and Never Enough: How My Family Created The World’s Most Dangerous Man,” stems from a conversation that Barry had with her niece on Nov. 1, 2018.

Barry told how she tried to help her brother get into college. “He was a brat,” Barry said, explaining that “I did his homework for him” and “I drove him around New York City to try to get him into college.”

Then Barry dropped what Mary considered a bombshell: “He went to Fordham for one year [actually two years] and then he got into University of Pennsylvania because he had somebody take the exams.” . . . . That’s what I believe,” Barry said. “I even remember the name.” That person was Joe Shapiro, Barry said.

Chris Bastardi, a spokesman for Mary Trump, said that she began taping conversations in 2018 with Barry after concluding that her relatives had lied about the value of the family estate two decades earlier during a legal battle over her inheritance, in which she received far less than she expected.

Under New York law, it is legal to tape a conversation with the consent of one party, which in this case was Mary Trump.

Bastardi said she recorded the conversations with Barry to gain information that would show she had been misled by the family about the estate’s value. “She hoped to prove this, as is often done, by recording words contrary to their sworn statements. She never expected to learn much of what she heard,” Bastardi said.

“Donald is out for Donald, period,” Barry said. Mary questioned Barry about what he had accomplished on his own. “I don’t know,” Barry said. “Nothing,” Mary responded.

How any decent, moral person can support Trump is dumbfounding and, in my view, certainly raises questions about such individuals decency and actual morality.  One cannot support immorality and be moral oneself.
Posted by Michael-in-Norfolk at Sunday, August 23, 2020