Day Three of the GOP CA Fantasy Land of Lies 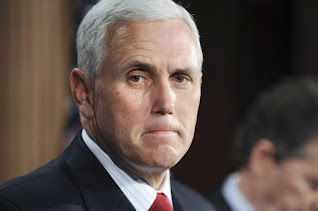 As regular readers know, I have zero use for Mike Pence - a man who I view as a self-loathing closet case who wears a phony religiosity as his cloak to convince himself and others that his is not who is really is. As one who was in the closet for 37 years and tried desperately to "pray away the gay," all of the signs are there.  But sadly, Pence's lies go far beyond lying about who he really is.  His address at the Republican convention was so devoid of a connection with objective reality in America - including the Trump/Pence regime's utter failure in handling the Covid-19 pandemic - that one would have thought he was speaking from either a fantasy land or certainly some other nation.  One cannot help but wonder how bungled the response to Hurricane Laura will prove to be based on the regime's track record.  Of course, Pence was not the only liar on display throughout the evening who sought to paint a picture of America that exists only in the right wing media and the minds of Trump's Kool-Aid drinking followers.  A piece in the Washington Post looks at this disconnect from reality.  Here are highlights:

What 176,000-plus deaths from covid-19? What devastating shutdown and recession? What double-digit unemployment? What mass uncertainty over whether and how to open the schools? What shocking police killings of African Americans? What long-overdue reckoning with systemic racism?

Let me put it another way: What country does Vice President Pence live in?

During his acceptance speech at the Republican National Convention on Wednesday, Pence sounded as though he lived in some kind of fantasyland that perhaps had encountered a few tiny little bumps in the road. His party has spent the week claiming to represent “the common man,” but Pence spoke as though he knew next to nothing about the daunting challenges that Americans are having to deal with every day. The most he could muster was an acknowledgement that “we’re passing through a time of testing,” as though he were consoling a motorist after a fender bender.

[H]is only pointed and specific words were his attacks against the Democratic nominee — “You won’t be safe in Joe Biden’s America” — and his full-throated endorsement of President Trump’s “law and order” rhetoric.

So far, the GOP has misused the White House — the people’s house — to have President Trump and his acting secretary of homeland security stage a naturalization ceremony, crassly reducing five newly minted U.S. citizens to photogenic props; have Trump pardon an African American ex-convict, as part of an all-out attempt to whitewash the administration’s shocking racism; and have first lady Melania Trump deliver her convention address, standing before Republican partisans in the Rose Garden she recently renovated.

The party also had Secretary of State Mike Pompeo speak to the convention from Jerusalem, playing an active partisan role in a way no sitting secretary of state has done in living memory — in the middle of an overseas diplomatic trip, no less. He is supposed to represent the entire nation, but apparently he represents only the loyal Trump base.

Pence is supposedly leading the nation’s response to the coronavirus emergency. One might have expected that he, of all speakers, would at least try to deal with that crisis substantively. But one would have been wrong.

As Pence spoke, a potentially catastrophic Category 4 storm was grinding toward landfall along the Gulf Coast. Many thousands of people were trying to evacuate their homes near the Texas-Louisiana border — and, because the Trump administration so bungled its response to covid-19, had to scramble for shelter and safety in the middle of a raging pandemic.

Pence apparently hadn’t noticed the reason for the Kenosha protests. And he apparently really didn’t notice the killing Tuesday of two protesters, allegedly by a young White vigilante and Trump supporter.

I wasn’t surprised. Earlier in the evening, the convention brought out Michael McHale, president of the National Association of Police Organizations, to describe Biden (who wrote the 1994 crime bill) and vice-presidential nominee Kamala D. Harris (a former prosecutor) as somehow anti-police

But what all of this actually reveals is Trump’s own naked fear.  He and the Republicans are pulling these stunts because they know that right now, according to polls, they are losing this election. Badly. And deep down, I hope, at least some of them realize that defeat is what they richly deserve.

Posted by Michael-in-Norfolk at Thursday, August 27, 2020