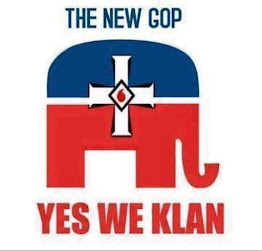 Like any political party, before the rise of Donald Trump the Republican Party had adherents that held troubling beliefs and were hostile to various segments of American society, but such individuals were not mainstream in the party and were pushed to the fringes.  With Trump, the doors were thrown wide open to such people and as they gained ascendancy sane and rational people began to exit the party which now finds its main base among three groups: the greed driven wealthy who will over look any moral outrage if they get lower taxes, open white supremacists who see one of themselves in Trump, and right wing Christian fanatics to whom Trump has promised power and exemption from non-discrimination laws. Despite this reality of who now controls the GOP, the party still tries to pretend it's still the party of yesteryear.  Increasingly, however, the lunatics and bigots who now find a home in the GOP are making that fanciful ruse harder to pull off. A column in the Washington Post looks at the batshitery and bigotry which is now mainstream in the GOP.  Here are column highlights:

Let’s face it: Once you try to delegitimize the only African American president (and then the only African American nominee for vice president), deploy a not-so-subtle call to return the old political order when Whites dominated (“Make America Great Again”), treat immigrants as if they are despoiling America, celebrate the ultimate symbol of white supremacy (the Confederate battle flag) and race-bait your way through three-plus years in office, it is pretty much a given that anti-Semites and conspiracy kooks will come come out from under every rock to support you.

We saw the welcome mat go out for anti-Semites in 2016, when Donald Trump initially refused to disavow David Duke and when his campaign resorted to anti-Semitic imagery. We witnessed House Minority Leader Kevin McCarthy (R-Calif.) play the “Jewish money” card by invoking George Soros and two other Jewish billionaires. We heard Trump argue that Jews who do not support him are “disloyal to Israel” and Republicans increasingly equate being American with being White and Christian and view outsiders as ruining America. . . . . in 2019, PRRI found "approximately two-thirds of Republicans agree both that discrimination against whites has become as much of a problem as discrimination against blacks (69%) and that immigrants are invading the country and changing American culture (63%).”

And so it should be no surprise that anti-Semitism and conspiratorialists have infected the Republican National Convention.

First, on Tuesday, QAnon conspiratorialist Marjorie Taylor Greene, whom Trump praised when she won the nomination for the Republican Party’s primary in Georgia’s 14th Congressional District, proudly showed off her invitation to the White House to watch Trump’s acceptance speech on Thursday                           . . . . In the years before she ran for office, GOP congressional candidate Marjorie Taylor Greene wrote two conspiracy-laden blog posts speculating that the 2017 white nationalist rally in Charlottesville, Virginia, that led to one counter-protester’s death was an “inside job” and promoting a debunked conspiracy alleging some Democratic Party leaders were running a human-trafficking and pedophilia ring -- known as “Pizzagate” -- was real.

Hours before she was set to speak at the Republican National Convention on Tuesday night, Mary Ann Mendoza took to Twitter and urged her followers to investigate a supposed Jewish plot to enslave the world.

Mendoza was supposed to talk about illegal immigrants and specifically the tragic loss of her son in a car crash. However, she holds some other views, which once upon a time were not acceptable in a mainstream party and now don’t seem to raise an eyebrow:

Her tweet on Tuesday linked to a lengthy thread from a QAnon conspiracy theorist that laid out a fevered, anti-Semitic view of the world. In its telling, the Rothschilds—a famous Jewish banking family from Germany—created a plot to terrorize non-Jewish “goyim,” with purported details of their scheme that included plans to “make the goyim destroy each other” and “rob the goyim of their landed properties.”

Only after the story surfaced did Mendoza’s speech get pulled. (No word yet if Greene is losing her invitation as well.) Apparently, Mendoza’s views did not raise any eyebrows before then.

Maybe the Republican National Committee — as thoroughly incompetent as it is — just did not vet her, you may say. But again, this ignores the fact that the Republican Party has put out the welcome mat for white supremacists, bigots and anti-Semites. The GOP can hardly be surprised when such people show up, anxious to venerate a president who they see is on their side.

The Biden campaign’s Jewish engagement director, Aaron Keyak, first expressed sympathy for Mendoza for having lost her child. . . . However, he observed, her planned appearance was sadly not a surprising choice for the Trump convention. “As much as they may try to disguise it, giving room for these ideas is what Trump has done from Day One.” He continued, “No parade of speakers can drown out the phrase ‘very fine people on both sides’ after the anti-Semites marched in Charlottesville to the chant of the ‘Jews will not replace us.’ To anyone really watching and listening, that refusal of Trump to condemn such hatred still rings loudly and clearly.”

In the United States, there is only one major party that provides a comfortable refuge and a party leader who mouths the same “replacement” fears that violent white nationalists espouse. It is  precisely for this reason that so many former Republicans understand the necessity of leveling the party to the ground and starting an opposition anew.

As I have often said, in my view, this move to open bigotry and conspiracy theory insanity began when evangelicals and Christofascists were cynically voted onto city and county committees. Now, the inmates have taken control of the asylum and the only solution is to burn it down.
Posted by Michael-in-Norfolk at Wednesday, August 26, 2020