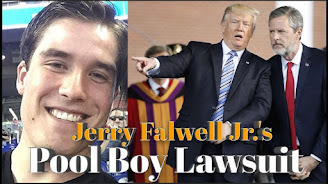 Like the occupant of the White House that he has supported, Jerry Falwell, Jr. - and most of the so-called leaders of evangelicals - has always been a con artist using religion and the gullibility of others to enrich himself and gain political power.  A key part of the scam has been to incite hatred against LGBT individuals and to depict us as sinners and all to often allege that we are a threat to both children and western civilization itself. Thus, it is delicious to see Falwell  laid low by a sex scandal that involves a three way relationship with a handsome and much younger man (one of at least two handsome young men favored by Falwell).  The situation underscores the hypocrisy of both Falwell, but also so many evangelicals who support Donald Trump, an admitted sexual predator and likely the most immoral individual to ever occupy the White House.  A piece in the Daily Beast looks at Falwell's much deserved fall.  Here are excerpts:

A pool boy allegedly fu*ked his wife as he sat, watched, and enjoyed every second.

For such a virulently anti-gay, Christian conservative, props to Jerry Falwell Jr. for at least serving up a note of pure Jackie Collins camp in the scandal that has led to his reported resignation as president of Liberty University, . . . “Becki [Falwell’s wife] and I developed an intimate relationship, and Jerry enjoyed watching from the corner of the room,” Giancarlo Granda told Reuters of his affair with the couple.

Granda told Reuters that these liaisons took place “multiple times per year” from 2012 to 2018 at hotels in Miami and New York, and at the Falwells’ home in Bedford County, Virginia. Granda showed Reuters texts and emails that showed the alleged trajectory of the affair.

Ask him all about it. Ask him about his sexuality. Ask him about his sex life. Don’t worry about seeming tasteless or intrusive, because Jerry Falwell Jr. has been tastelessly intruding on LGBTQ people—apparently disgusted by what they do in bed—all his life. Judge, judge, and sex-shame some more: this has been Falwell’s chosen way to promote himself and his beliefs at the expense of LGBTQ people’s safety and equality. Now he may get to know just a small dose of what that judge-and-shame spin-cycle feels like.

Falwell is not the first right-wing hypocrite, quick to judge others while apparently sinning on the sly. Judgment in these circumstances seems not only appropriate, but also karmic.

Falwell has actively sought to judge and hurt LGBTQ people for the duration of his life—just like his late father, Jerry Falwell Sr., who founded the “Moral Majority” in 1979, and spent his life whipping up as much hatred as he could against LGBTQ people.

One significant strand of the Trump administration’s anti-LGBTQ campaigning today, which goes under the soft-sounding nom de plume of “religious freedom,” piloted by Mike Pence and his cohorts, springs direct from the Falwell Sr. template.

Falwell Sr. and his supporters argued that gays preyed on kids, and that LGBTQ acceptance would lead to nothing less than the destruction of America. In his later years, Falwell Sr. moved to a kind of “love the sinner, hate the sin” position, but his outright bigotry remains his more memorable trademark.

If it sounds wildly absurd to a millennial generation there was nothing funny or absurd about it at a time when gays were dying, alone and stigmatized, of AIDS thanks to a Reagan administration that cared more about the evangelicals Falwell spouted his poison for than it did for dying gay Americans.

Back then, there were no positive images of anything gay in pop culture. A gay kiss on TV led to advertising boycotts. Falwell was one of the chief bullies of a one-sided anti-LGBTQ hate playground—ready to extinguish even the mildest flame of social acceptance with ferocious gales of hate.

Just like his father, Falwell Jr. is apparently fine with hating LGBTQ people, while being completely non-judgmental about any number of ungodly misbehaviors and scandals involving Republicans—such as a leader who proudly boasts of grabbing women by their genitals. And so much more.

But this alliance isn’t about a true expression of faith. How could it be with a president of America who openly mocks religion, while courting its most fervent followers, who holds a Bible upside down in front of a church, after having peaceful protesters violently set upon?

This relationship between evangelicals and Republican leaders in 2020 is based on the same thing it was based on when Falwell Sr. founded the Moral Majority: political expediency. It is about Falwell and evangelicals merrily making a deal with the best devil who can advance their prejudice-filled, discriminatory agenda, and the Republicans leaning in to their hatred for easily bankable votes.

Granda told Reuters that he feels the Falwells preyed upon him. “Whether it was immaturity, naïveté, instability, or a combination thereof, it was this ‘mindset’ that the Falwells likely detected in deciding that I was the ideal target for their sexual escapades,” he told Reuters.

As Falwell Jr. faces questions of who he is attracted to and his own sexual morality, he may do so in the hypocrisy-streaked light of the litany of anti-gay remarks he has made in the past.

Now, Falwell Jr. finds himself in the same position as his father saw his gay friend [Mel] White, who was, said Falwell Sr. “caught and exposed… it’s a terrible thing to leave behind the wreckage of a family, just so that I can sleep with somebody I want to sleep with.