The Self-Defeating Extremism of the GOP Base 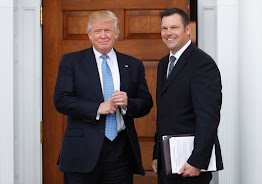 Here in Virginia, the Republican Party of Virginia has not won a statewide race in eleven (ii) years. As the Virginia GOP's fortunes have fallen, instead of nominating moderate candidates who might have a chance of winning in the general election, the party base has nominated extremists under the insane belief that the party loses are due to candidates who are too moderate.  Just a few months ago, Virginia's 5th congressional district saw a moderate Republican defeated by and extremist with ties to Jerry Falwell's Liberty University.  What had been a safe Republican seat is now viewed as a possible Democrat pickup.  This mind set shows the alternate universe the unwashed GOP base lives in thanks largely to the deliberate and cynical welcoming of evangelicals and Christofascists (and now avowed white supremacists) into the party. The phenomenon is not limited to Virginia.  In Kansas the incredibly extreme anti-immigrant Kris Kobach may win the U.S. senate primary and set the stage for a Democrat win in November.  While party leaders see the threat, much of the lunatic base does not.  A piece in Politico looks at the situation.  Here are excerpts:

On Thursday, the top operative for Senate Republicans' campaign arm appeared on a private Zoom call organized by GOP operatives to discuss the party's efforts to stave off a Democratic takeover.

During the presentation, National Republican Senatorial Committee executive director Kevin McLaughlin warned that if hardline conservative Kris Kobach wins next Tuesday's Kansas Senate primary, it could doom the GOP Senate majority — and perhaps even hurt President Donald Trump in a state that hasn't voted Democratic since 1964.

Senate Republicans have opposed Kobach for a year, fretting that he can’t win a Senate contest after losing the 2018 gubernatorial race, and have warned about him consistently in public and in private.

After failing to woo Secretary of State Mike Pompeo into the race, Republicans had mostly rallied behind Rep. Roger Marshall, who was leading Kobach comfortably in internal polling earlier in the summer. But after nearly $5 million was dumped in by a super PAC with ties to Democrats to elevate Kobach and bash Marshall’s image, Republicans acknowledge that the primary is a dead heat.

A Kobach victory would upend the battle for control of the Senate. Democrats haven't won a Senate race in Kansas since the 1930s, but with Kobach on the ballot, Republicans would be forced to sink millions into trying to defend a seat party officials believe should have stayed safely in their column.

Republicans are already stretched thin on a Senate map that features more than a half-dozen GOP incumbents in competitive races. GOP leaders concede the fight to keep the Senate has gotten harder in recent months but believe the party still can maintain control if it isn't dumping money into places like Kansas.

Democrat Barbara Bollier, a state senator and former Republican, faces only nominal opposition in her primary and has outraised all of her potential GOP foes.

[A]n internal survey conducted for the NRSC last week showed that in a general election matchup, only 54 percent of Republican primary voters would back Kobach, while 29 percent would instead to vote for Democrat Barbara Bollier, according to three people familiar with the data, which has been presented to the White House. That much potential crossover support for Bollier, who has the backing of major Kansas and national Democrats, could doom Republicans' chances in the race.

In addition to private entreaties, Republicans opposed to Kobach have sounded the alarm consistently and publicly. The NRSC blasted Kobach on the day he announced last year. Sen. Pat Roberts, who is retiring from the seat, endorsed Marshall last month despite previously pledging to stay neutral, and Senate Leadership Fund is spending nearly $2 million on positive ads boosting Marshall, according to recent FEC filings.

One veteran Republican operative in the state, who requested anonymity to speak frankly, said Trump likely knows “if he doesn’t have Kansas, the Senate majority is fried.

“Every poll I’ve seen says that Kobach can't win a general election,” Gingrich said on the radio. “[Kobach] did the worst statewide numbers when he ran for governor of any Republican in the last more than a decade. He's weaker now. Kobach is the Schumer candidate, and people just need to understand that.”