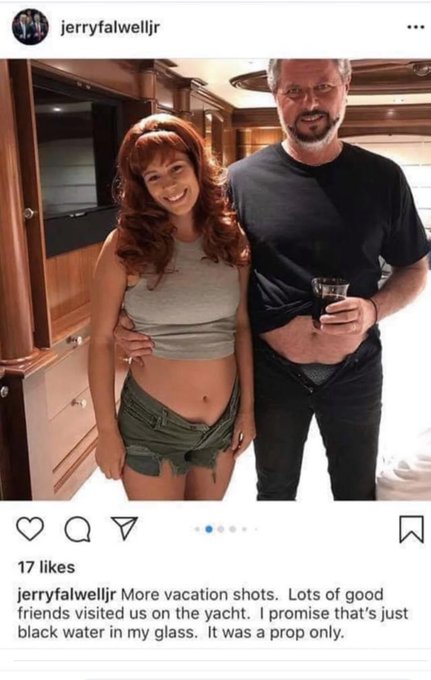 As regular readers know, I hold those I view as "sacamvangelists" - those who cynically use religion to fleece the gullible and ignorant to line their own pockets while caring nothing about Christ's true message - in low repute.  Many live the lives of millionaires while privately laughing at those they fleece and privately ignoring the moral dictates they seek to impose on others.  Here in Virginia we seem to have an over representation of such individuals (northern Virginia has a plethora of right wing "Christian"  organizations), most notably Pat Robertson and Jerry Falwell, Jr., with their toxic "Christian universities."  It goes without saying that most of these leeches on society support the morally bankrupt occupant of the White House.  Now, thankfully, Jerry Falwell, Jr., has been seemingly forced into an indefinite leave from Liberty University after his latest scandal that invoked his posting of a photo of himself with a woman not his wife with their pants unzipped.    A piece in Forbes looks at this welcomed development and Falwell's previous sexually suspect scandals.  Here are highlights:

Jerry Falwell Jr. agreed Friday to take an “indefinite leave of absence” from his roles of president and chancellor of Liberty University at the request of the Board of Trustees after he shared a provocative, now-deleted vacation photo on social media, the latest in a series of scandals for the evangelical leader.

Falwell landed in hot water once again this week after posting a photo of himself on a yacht while on vacation with his pants unzipped, midriff hanging out, a drink in hand and his arm around a woman.

The picture brought accusations that he was indulging in behavior that wouldn’t be tolerated by his university’s students, and a call for his resignation from GOP lawmaker and former pastor Rep. Mark Walker, who said Falwell’s “ongoing behavior is appalling.”

Falwell began stoking controversy shortly after he took over as president of Liberty University, one of the world’s largest conservative Christian universities, urging students at a 2015 convocation to carry concealed weapons so they could “end those Muslims before they walked in,” referencing a mass shooting in San Bernardino.

After offering his early endorsement of Trump in the 2016 election, the prominent evangelical figure was criticized by students for silencing anti-Trump dissent and creating a “culture of fear,” accusations that were expanded upon in a 2019 Politico exposé, citing two dozen Liberty staff, which alleged Falwell would discuss his sex life at work in graphic detail and show off photos of his wife “in provocative and sexual poses.”

As controversy swirled around Falwell’s business dealings involving a young pool attendant in Florida, photos emerged of the Liberty president and members of his family partying at a Miami Beach nightclub in 2014; Falwell dismissed the allegations, which don’t line up with the school’s standards for students barring co-ed dancing and drinking, saying the images were photo-shopped (though the photographer published more the next day).

Some of the controversies have involved Falwell’s support of Trump, which was seen as integral in winning support from the Christian right in the 2016 election, including allegations that Trump fixer Michael Cohen helped Falwell get rid of racy “personal” photos in someone else’s possession in 2015, as well as reports that Cohen hired a Liberty employee to manipulate polls in favor of Trump ahead of the election, with sources saying Falwell’s son accompanied the employee on a New York trip to collect payment.

“Jerry Falwell Jr.’s ongoing behavior is appalling,” wrote Walker, the vice chair of the House Republican Conference, in a Thursday tweet. “As a Music Faculty Advisory Board Member and former instructor [at Liberty University], I’m convinced Falwell should step down. None of us are perfect, but students, faculty, alumni … deserve better.”

The university has numerous restrictions that most American colleges do not have, including, as of 2015, a $20 fine for attendance at a dance and a $50 knock for students “visiting alone with the opposite sex at an off-campus residence.” Like his father, Falwell has been heavily involved in politics.

Sadly, Falwell's hypocrisy is the norm among so many self-styled leaders of the evangelical movement.Hopefully, his removal will become permanent.

Posted by Michael-in-Norfolk at Saturday, August 08, 2020