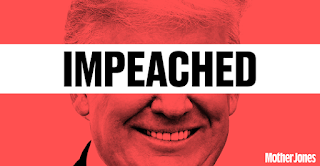 As I type this post, the House of Representatives has voted to impeach Donald Trump for high crimes and misdemeanors - only the third time in the nation's history.  Throughout the day Republicans have resorted to histrionics - one Republican insanely equated the day's proceedings to the biblical trial of Christ - and most importantly denied the existence of proven facts. Seeing the moral degradation of today's GOP - something that in my view directly correlates to the rise of the Christofascist within the party - I am ashamed to have ever have been a Republican.  Like their Christofascist and white supremacist masters, today's congressional Republicans are morally bankrupt. A piece in the Washington Post looks at the GOP's denial of facts - some even admitted by Trump.   Here are article highlights:

It’s often been said that the two sides in the current impeachment debate can’t even agree on basic facts. But increasingly for the GOP, that’s also true of well-established and indisputable facts.

Some Republicans have said President Trump’s actions were bad but not impeachable. But a few of them have set out to argue for an alternate reality: One in which it’s not conceivable that Trump did something wrong, because the things that happened didn’t actually happen.

Trump not only specifically requested an investigation of Joe Biden in that July 25 call with Zelensky — he said, “Biden went around bragging that he stopped the prosecution, so if you can look into it ... It sounds horrible to me” — but he also asked China and Russia to take similar actions at other junctures. Trump said publicly, “And by the way, likewise, China should start an investigation into the Bidens.”

He also, in 2016, asked Russia to find and turn over Hillary Clinton’s missing emails, saying, “Russia, if you’re listening: I hope you’re able to find the 30,000 emails that are missing.” Trump said the last one was a joke; the events since then sure seem to call that into question. Trump has now asked three countries to look into his political rivals.

Rep. Steve King (R-Iowa) then echoed the argument on the House floor. “Joe Biden was not the opponent of Donald Trump," King said. "He’s in a 21-way primary.”

It is true that Biden hasn’t won the Democratic nomination. But he is indisputably Trump’s campaign rival, as are all of the Democrats running. Trump himself has made clear he views Biden as a rival, devoting lengthy portions of his speeches to attacking Biden. Meadows’s implication is that Trump didn’t have a personal motivation to push for investigating Biden, which is patently ridiculous.

Even the White House has admitted the aid was withheld. On the House floor Wednesday, Rep. Tom Cole (R-Okla.) maintained not just that military aid to Ukraine wasn’t used as part of a quid pro quo but also that the aid wasn’t withheld.

Added Rep. Jim Baird (R-Ind.): “The president did not commit any crimes. He did not break any laws. And there was no quid pro quo.”

Except that there rather clearly were quid pro quos, as multiple witnesses have attested and as Mulvaney himself momentarily confirmed. It has been extensively shown — including in text messages we can see with our own eyes — that a White House meeting for Zelensky, in particular, was understood by the Ukrainians to be tied to announcing the investigations. . . . . there were quid pro quos, and according to multiple witnesses in both cases, they were communicated to Ukraine.

Posted by Michael-in-Norfolk at Wednesday, December 18, 2019