Is Pete Buttigieg Too Young to Be President? 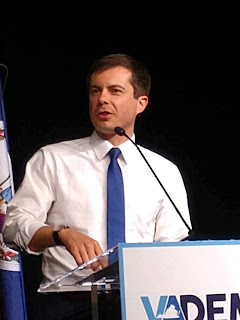 America currently finds itself with an occupant of the White House who is a malignant narcissist, who doesn't read, disregards the wisdom of experts, and acts on impulse and Twitter rants. It would seem almost anyone would be more fit to occupy the White House rather than Trump. Of the leading Democrat candidates for the presidential nomination, three - Biden, Sanders and Warren - are at an age where many people begin to fail physically in terms of stamina and cognition.  The fourth, Pete Buttigieg, is at the other end of the spectrum age wise and the persistent question of his critics is whether he is too young, despite his high education (Trump will not even allow his academic grades to be released) and poise. Buttigieg points out - as Virginians who know history - the Founders were very young, Jefferson being a mere 33 when he authored the Declaration of Independence.  A column in the New York Times looks at this question of age.  It doesn't answer the question, but give much to think about, including the crucial need to remove Donald Trump from the White House.  Here are excerpts:

Even before I could mention their names to Pete Buttigieg, who’s vying to become the youngest American president, he brought them up. He also brought up Jacinda Ardern, the prime minister of New Zealand, who was 37 when she took office, and Emmanuel Macron, who became the president of France at 39.

That’s how old Buttigieg, now 37, would be at his inauguration.

“This country was founded by 20-somethings,” he added, referring to the fact that Aaron Burr, Alexander Hamilton and James Madison, for example, were in their 20s on July 4, 1776. Thomas Jefferson was 33. John Hancock was 39.

Donald Trump is 73, meaning that he has more than a half-century of life lessons on some of them. How does that show? Well, an hour before I connected with Buttigieg, the president saw fit to tweet that Time’s choice of Thunberg, a Swedish climate-change activist, was “so ridiculous” and that she should “work on her Anger Management problem.” Facing imminent impeachment, he started a Twitter spat with a teenage girl.

Trump is the “most extreme example of the fact that while wisdom and age may be related, they’re very much not the same thing,” Buttigieg said.

Still. Age isn’t irrelevant. America is much, much bigger than Finland and much, much more complicated than it was during the Revolutionary War. In a country so powerful, at such a perilous time, is Buttigieg simply too young and too green to lead the way?

It’s the question that hovers over a presidential campaign whose success has stunned the political world.

And even now, after first-place finishes in some recent polls of Democrats in Iowa and New Hampshire, he’s pressed about whether someone with his short résumé, capped by two terms as the mayor of a city of just 100,000 people, could possibly be up to the presidency and pass muster with enough Americans to get elected.So we spent most of a nearly hourlong car ride between campaign stops in the New York City area talking about it. He conceded that the longer you’re alive, “the more you learn,” and that there are lessons and life passages still in the offing for him. He’d like to be a parent, but if he succeeds on his current quest, he’d become the leader of the free world first.

“A lot of things in my life have been out of sequence,” he said. “I was a mayor before I got married. I was a war veteran before I had dated.” He was referring to his seven months in Afghanistan and recognizing that while he has been precociously ahead of the game in many regards, he was behind in others. It was only four years ago, at 33, that he finally had a serious romantic relationship — with the man, Chasten, who is now his husband.

Age has played out in surprising ways in the Democratic primary. While Buttigieg is unusually young, the other three candidates grouped with him at the head of the pack — Joe Biden, 77; Elizabeth Warren, 70; and Bernie Sanders, 78 — are unusually old.The oldest candidate, Sanders, is by far the most popular among the youngest Democratic voters, getting the support of 52 percent of those between the ages of 18 and 34 in a national Quinnipiac poll released on Tuesday. Buttigieg got just 2 percent of that group, in contrast with 12 percent of Democratic voters between 35 and 49, 12 percent of those between 50 and 64 and 11 percent of those 65 and older. He attributed that to younger voters’ attraction to Sanders’s less pragmatic, more ideologically pure vision.It’s certainly not because Buttigieg hasn’t courted them. In this “O.K. Boomer” moment of younger Americans’ disgust with the income inequality, social injustices and climate change that older Americans have bequeathed them, he has claimed a generational perspective that separates him from his rivals for the Democratic nomination.He also makes the case that people of Biden’s, Warren’s and Sanders’s age have had their chance to fix things. Shouldn’t someone with an arguably fresher outlook — someone from outside Washington — take a turn? With that reasoning he frames political vulnerabilities as political virtues. . . . “It means that one generation has been in charge for a very long time.”

Buttigieg has to muster extra poise, extra confidence, lest any deficit be interpreted as immaturity. But then that poise and confidence, in the context of his age, are interpreted as arrogance. His detractors constantly tell me that he’s cocky — or robotic.

“One of the things I get is, ‘Why aren’t you more passionate?’” he said. “I’m very passionate. But I’m also very disciplined. If I weren’t, it would be harder to be taken seriously.”

The Constitution decrees that a House member must be at least 25, a senator at least 30, a president at least 35. No American president has been under 40, and only two took office before the age of 45: Teddy Roosevelt, who was 42, and John F. Kennedy, who was 43.

Shouldn’t and doesn’t that give Buttigieg pause?

“Of course you have those moments,” he acknowledged. “We’re talking about a role of unbelievable importance and complexity and challenge. And yet every person who’s done it has been a mortal, a human being — and of course so much depends not just on the individual but on how you build a team.”

He repeated something that he has said scores if not hundreds of times on the campaign trail: As mayor of South Bend, Ind., for the past eight years, he has had a kind of executive experience that someone who has served in Congress for that long or longer hasn’t. Besides, he said, experience isn’t the only font of wisdom. Education matters. Intuition, too.

He comes armed with historical examples beyond the founders of people who made remarkable contributions early on. “I’m not going to compare myself to Martin Luther King,” he said, “but he’s certainly an example of somebody who had a huge impact, mainly in his 30s.” King died at 39.

Maybe he’d match up well against Trump. I’m not sure, and how I wish I were, because the likeliest Trump slayer is the Democratic nominee I want and America needs. Both substantively and in terms of electability, Buttigieg would be better off if he were older, with higher positions under his belt, but then all of the leading Democrats have worrying shortcomings. His youth is a concern. It shouldn’t be a deal-breaker.

Posted by Michael-in-Norfolk at Sunday, December 15, 2019