Did Trump Appoint a Raging Homophobe to an Advisory Council? 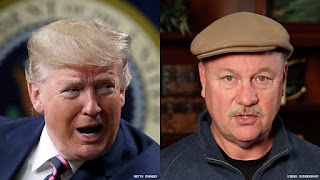 The Trump/Pence regime has had an open door policy toward some of the most extreme homophobes and Christofascists, some of whom claim to be on a "Faith Advisory Council."  Some of these individuals include Tony Perkins of Family Research Council who has documented white supremacist ties (and who boasts of his access to Trump), and noted "Christian" grifters Franklin Graham and Jerry Fallwell, Jr., each of whom routinely use religion and preying on the gullible to enrich themselves. Now, Tim Wildmon of American Family Association ("AFA"), perhaps one of the most rabid anti-gay organizations of them all which routinely disseminates off the charts outright lies and falsehoods (hence a perfect fit with Trump) claims to have been appointed to this Council.  Perhaps embarrassed by Wildmon's off the charts lunacy, the White House is denying that Wildmon received any such appointment and the that the Council exists. A piece in The Advocate looks at the competing claims.  Here are excerpts:

Tim Wildmon, president of the virulently anti-LGBTQ American Family Association, announced Monday that he had been named to Donald Trump’s Faith Advisory Council — but on Wednesday, a White House spokesman said there had been no such appointment, nor is there any such council.

“I have no idea what he’s talking about,” White House Deputy Press Secretary Judd Deere told the Washington Blade. “There is no such thing as a White House Faith Council or Advisory Board. There is a Faith & Opportunity Initiative led by an adviser, Pastor Paula White, but it does not include a council or advisory board.”

But the AFA had sent out a press release Monday saying Wildmon had joined the body, which it said is “made up of key leaders who support and help guide the president’s faith-based initiatives, give insight on policy important to evangelicals and, most importantly, pray for the president.” It said other members of the council include White and such well-known Christian right figures as Tony Perkins, Robert Jeffress, and Jerry Falwell Jr., all of whom have worked with Trump on various projects. . . . The press release is still posted on the AFA’s website.

The AFA, based in Tupelo, Miss., is classified by the Southern Poverty Law Center, a progressive watchdog organization, as a hate group because of the dangerous misinformation it spreads about LGBTQ people. It considers homosexuality a sin, as many religions do, but it seeks to infuse public policy with that belief. It is also deeply transphobic, having often portrayed transgender people as predatory, and antichoice, with a recent blog post saying billionaire philanthropist Warren Buffett is going to hell because of his support for reproductive rights.

Bryan Fischer, who hosts a radio show for the AFA and blogs on its website, is one of the most hateful commentators in the nation, demonizing LGBTQ people, feminists, Mormons, Muslims, and many other groups. He recently wrote that when the Hallmark Channel agreed to re-air a wedding planner’s ads featuring a lesbian couple, it was caving to the “gay gestapo.” One Million Moms, an AFA offshoot, was one of the groups that had campaigned against the ads.

The Blade sought comment from the AFA on the conflicting reports about Wildmon’s appointment but has so far not received anything. The Advocate has put in its own request for comment with the AFA’s public relations representative, Hamilton Strategies, but also has not received a response.

Posted by Michael-in-Norfolk at Thursday, December 19, 2019