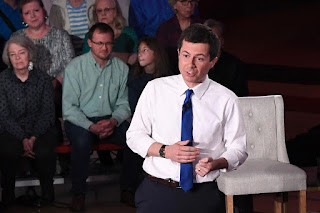 Back in early 2017 Elizabeth Warren and Bernie Sanders thrust themselves into Virginia's Democrat gubernatorial contest pushing a far left candidate and trashing Ralph Northam who ultimately went on to win the primary and the general election.  Had Warren and Sanders and their far left followers prevailed, in my view, Virginia likely would now have a Republican governor and who knows where control of the General Assembly would now lie.   All that mattered was that Northam did not meet their standard of ideological purity and wasn't radical enough.  Never mind that Northam ran on perhaps the most progressive agenda of any gubernatorial candidate in Virginia history.  It was a near repeat of how the far left was similarly disenchanted with Hillary Clinton in 2016 and seemingly stayed home or voted for third party candidates - think Jill Stein - to throw the election to Donald Trump.  History is repeating itself at the national level again as the left of the Democrat coalition attacks moderates and pushes an agenda that likely would help re-elect Donald Trump.  A prime target of the left's wrath is Pete Buttigieg whose sin is not being radical (and un-electable) enough to meet the left's purity tests.  Absurdly, some of the far right in the gay community whine that Buttigieg is not "gay enough."  From my experience, one is either gay or not, which underscores the idiocy of these folks. A piece in CNN looks at the lefts targeting of Buttigieg and moderates and, in my view, secure a Trump victory in 2020.  Here are excerpts:

Increasingly, their opposition to Buttigieg is turning to fury, fueled by a boisterous online ecosystem of progressives who are driving anti-Buttigieg commentary and memes. They view him as beholden to corporate interests, unable to win over the diverse Democratic base that these activists take pride in, and disinterested in the systemic change they believe the country desperately needs on issues like the influence of big money on politics and climate change and systemic racism.

These narratives have persisted in spite of what his campaign points to as evidence to the contrary, including that Buttigieg has proposed plans to address those very issues such as a climate change plan to cut emissions to zero by 2050 and a proposal to address systemic racism that he calls the Douglass Plan.

Buttigieg supporters say the criticism has become unhinged, with some progressives eager to latch on to virtually any negative narrative about Buttigieg whether it is true or not.  There is no question: The youngest candidate in the 2020 presidential race, at age 37, isn't doing well with young Democratic voters.Since he jumped into the race, Buttigieg has gone from a little-known, small-town mayor, to representative of the Democratic Party vision has of itself as an inclusive party to, now, the arch-nemesis of certain progressive advocates.

The intense heat on Buttigieg from some corners of his party comes as he rises in both early state and national polls and vies with Massachusetts Sen. Elizabeth Warren for a slice of the college-educated electorate. Both candidates have upped their contrasts with each other in recent weeks as the Iowa caucuses near.

"The nature of presidential politics is the better you do, the more you are tested," said David Axelrod, a former senior adviser to President Barack Obama and chief strategist of his campaigns. "Buttigieg has made a pretty remarkable progress in 2019. Now he is being tested as a legitimate top tier candidate and we'll see how he handles it." "It is an inevitable part of this process," he added.Buttigieg's critics cite a dramatic turn in his approach to his candidacy and are particularly incensed by his criticism of Warren on "Medicare For All." (Buttigieg, for his part, has pushed for a proposal called "Medicare for all who want it," an option that would keep private health care plans.) They consider his low standing with black and Hispanic voters to be disqualifying, and pejoratively refer to him as "Mayo Pete" for his overwhelmingly white supporters. As a result, his candidacy, in their view, is akin to the vanity project of an overly ambitious, privileged white man [as if Sanders' isn't exactly that]."He's phony," said Adam Jentleson, when asked why he opposes Buttigieg's candidacy so strongly.

For Washington insiders, Jentleson is a well-known figure, a former senior aide to former Senate Democratic Leader Harry Reid, a far cry from the kind of left-wing progressive candidate Jentleson now would prefer. But now, Jentleson is known online as a progressive flame thrower, leading the anti-Buttigieg charge and slamming him for his attacks on more progressive candidates like Vermont Sen. Bernie Sanders and Warren.
Buttigieg's campaign largely dismisses the intense criticism they have experienced from people like Jentleson. "We're not focused on the small echo chamber of Washington insiders talking to each other on Twitter," said Chris Meagher, a Buttigieg spokesman, "we're focused on talking to voters about the issues that matter most to voters." He continued: "This election is about defeating Donald Trump and uniting the country the day after this president leaves office. Pete is the best candidate to do just that."The kind of attacks that have been directed at Buttigieg have puzzled the candidate as well as his aides. And as they have gone from the internet to real life, including a wave of new protests outside of his high dollar fundraisers."It is a little strange, because I think that I broadly share a lot of the same values and goals," Buttigieg told The Washington Post's Bob Costa in an interview when asked if the protests bother him. "It's a little hard to have a conversation with them, so I don't know for sure."It has been perplexing to Buttigieg supporters that a particularly vitriolic brand of anger has been reserved for Buttigieg rather than other moderate candidates like Minnesota Sen. Amy Klobuchar and former Vice President Joe Biden, both of whom share Buttigieg's positions broadly on issues like Medicare for All and college affordability.Many of the progressive voices fanning the anti-Buttigieg flames explain the disproportionate attention by pointing to Buttigieg's standing in the polls and a feeling of inevitability that Biden's candidacy is not as strong as it currently seems.The distaste among some gay Democrats to Buttigieg has been the subject of a fair amount of analysis -- even raising the interest of Tim Miller, a moderate gay Republican and former Romney aide who has quizzically observed what he believes is a disproportionate amount of vitriol directed toward Buttigieg.

"They're the meanest," Miller said. "Within the gay community, unfortunately, I think it's a lot of resentment that Pete does not represent the gay ideal -- the pre-conceived notions about what a gay President would act like."

"The idea that he's a closet Republican is absurd, but I think because of his nature as a mild-mannered, traditional-acting religious man, that it's easier to demean him as being Republican lite," he added.But for others, the part of Buttigieg's identity that is the most salient is not that he is gay, but that he is white, which they believe has insulated him from the kind of scrutiny that other candidates have been subjected to.Throughout the Trump presidency Democrats have insisted that removing him from office is a top priority, but the #neverPete sentiment is testing that.


Donald Trump and his campaign must be smiling broadly.  If Trump wins re-election, as in 2016, the far left of the Democrats will bear a significant guilt for that result which will be the antithesis to all they allegedly support.
Posted by Michael-in-Norfolk at Tuesday, December 17, 2019

Amen to your points regarding leftwing Democratic litmus tests. My favorite worst example is when the Democratic left primaried Joe Lieberman because he was hawkish in his foreign policy. Joe ran and won as an independent in the general and then paid the left back by sabotaging the public option in Obamacare. I do not think that Joe would have done that as a full member of the Democratic caucus in the Senate, even with the pressure from the insurance industry in Connecticut. As for Pete, we will be forever grateful both to him and to Chasten for their courage, dignity and authenticity in modeling for America such a heartfelt image of same-sex love and commitment. However, I personally am somewhat troubled by Pete's narrative about his coming out process, how he somehow ignored 20 years of LGBT activism. how he subordinated himself to career concerns. In his initial interview with Rachel Maddow, Maddow quizzed Pete about his identity journey, how it was that Rachel could be the first out Rhodes Scholar 10 years before Pete went to England as a Rhodes Scholar while in the closet. Does Pete's caution/calculation in that profound personal decision perhaps indicate how he approaches policy issues? If Pete's star continues to rise and he is our nominee, I am all in. But it seems to be that there are legitimate questions to be asked.

I understand you questions about his coming out narrative. That said, each of us has to find our own way. In my personal case, I was closeted and in denial for 37 years. Admittedly, it was a different time then, but I am sure that some questioned my honesty and agenda when I launched into LGBT activism - especially after having been a GOP activist in the past.